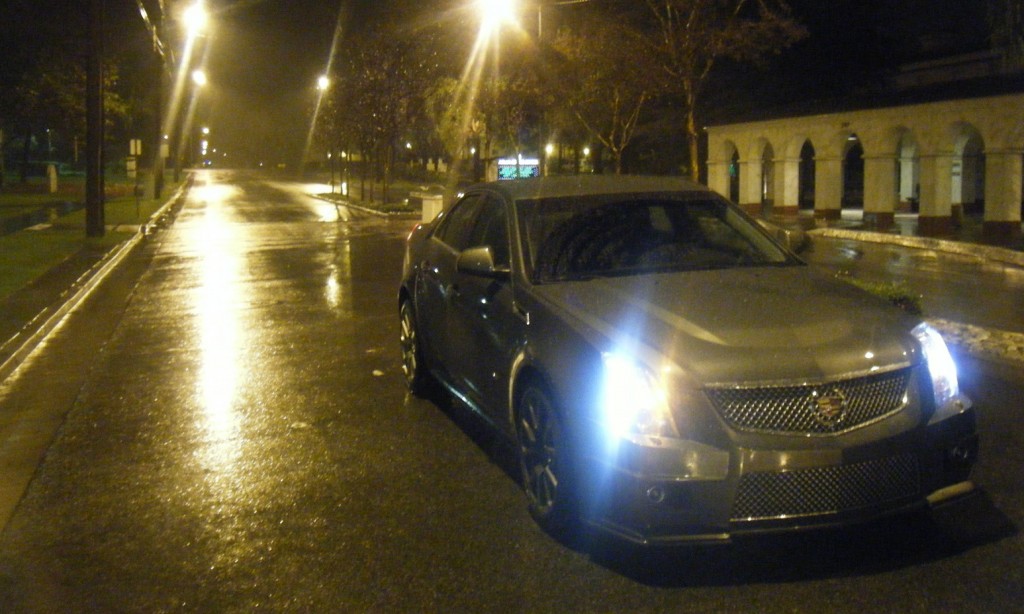 As one of the worst rainstorms in recent history dumps over Southern California causing floods and landslides, I am handed the keys to a car that contains a presence that rivals the forces of mother nature. To say that the CTS-V is a fast car would be like describing getting struck by lighting as “tingly.” In terms of the numbers the Cadillac boasts a 6.2l V8 LSA motor that is a variation of the LS9 in the ZR-1 Corvette that churns out a measly 556 hp and 551 torque. That will project this heavy sedan from 0 – 60mph in around 3.9 seconds and onto a quarter mile somewhere near 12 seconds at around 118mph. The sheer power of this car cannot be explained simply by numbers. The best way to describe it may be to compare to a scene from the classic Disney film, “Angels in The Outfield.” A pitcher is helped by an angel who grabs the ball and flies into the catchers mitt unseen. When you are driving along at about 25mph and step on the right pedal… You’d be hard pressed to tell me a host of angels aren’t pushing from behind.

My main complaints in the CTS Coupe regarding the handling and overall “sportiness” of the Cadillac have been eliminated due to an upgraded suspension system using Delphi MagneRide technology… something about magnets and reacting quickly to changes in road conditions. The stuff works well. The CTS barge is stopped by Brembo brakes that are about the size of wheels on most cars. On the sharp corners up Glendora Mountain Road the Cadillac was simply fantastic. It brings you to a chuckle every time you throw the massive vehicle into a corner at a seemingly stupid speed and feel nothing but grip from the tires. The supercharger on this car does take a little while to spool up and you wont see its impact till around 40mph, but the engine alone is more than enough to do the job in most conditions.

The vehicle we tested was equipped with the Tremec 6-speed manual transmission which was very fluid and had a very nice, short throw to it. The initial takeoff turns into a burnout or stall situation for those more acquainted with a Ford Focus, but can be mastered quickly. The only real benefit I would have seen to the automatic was sharp turns in which 2nd gear seemed too high and 1st gear seemed like a death wish. The traction control in the car is simply stunning and was tested to its limits on wet asphalt that I would describe as driving on glass. The system was not intrusive when turned “OFF” and came in just in time to save your neck. And in TC “ON” mode you could sprint quickly onto a freeway and not fear that the back end would get twitchy.

The interior of the vehicle would be familiar to anyone who has been inside a regular CTS. The dash is filled with soft materials and the design is accentuated with glowing lights in the evening.  The only huge noticable differences are the “microfiber suede” steering wheel with “V” logo, 14-way adjustable suede lined Recaro bucket seats, and the manual transmission. Cadillac also added a “G-meter” under the info on the display screen, for those who care. The Cadillac Navigation and Audio display systems are easy enough to use but lack certain features and easy of use that I found several weeks prior in an Audi A3. The seats were comfortable enough considering the track racer agenda of the car.

On the outside the Cadillac is in my opinion one of the most menacingly beautiful looking cars in my lifetime. The new “Evolution Green Metallic” paint for 2011 is now one of my favorite manufacture colors, you simply have to see it in person to understand how good it makes this car look. The car sits on 19″ wheels that were painted a gunmetal color. The headlights and tailights are fantastic looking in the evening.

Overall the CTS-V is simply stunning in nearly every way. Its one of the few cars I’ve had in awhile that seemed like a real “value” for the money you pay… if that’s possible at $69k. When you look at the pricing on vehicles like the BMW M5, Mercedes E63, and the Audi S6 its simply a better car for the price. Its insane to think that in a time of automotive bailouts and green hybrid vehicles, GM releases a 556hp sedan that can outrun Porsches and Ferraris.  The Cadillac CTS-V is one of the few that has weathered the storm of the modern marketplace and truly stands on its own as a pinnacle of great engineering.