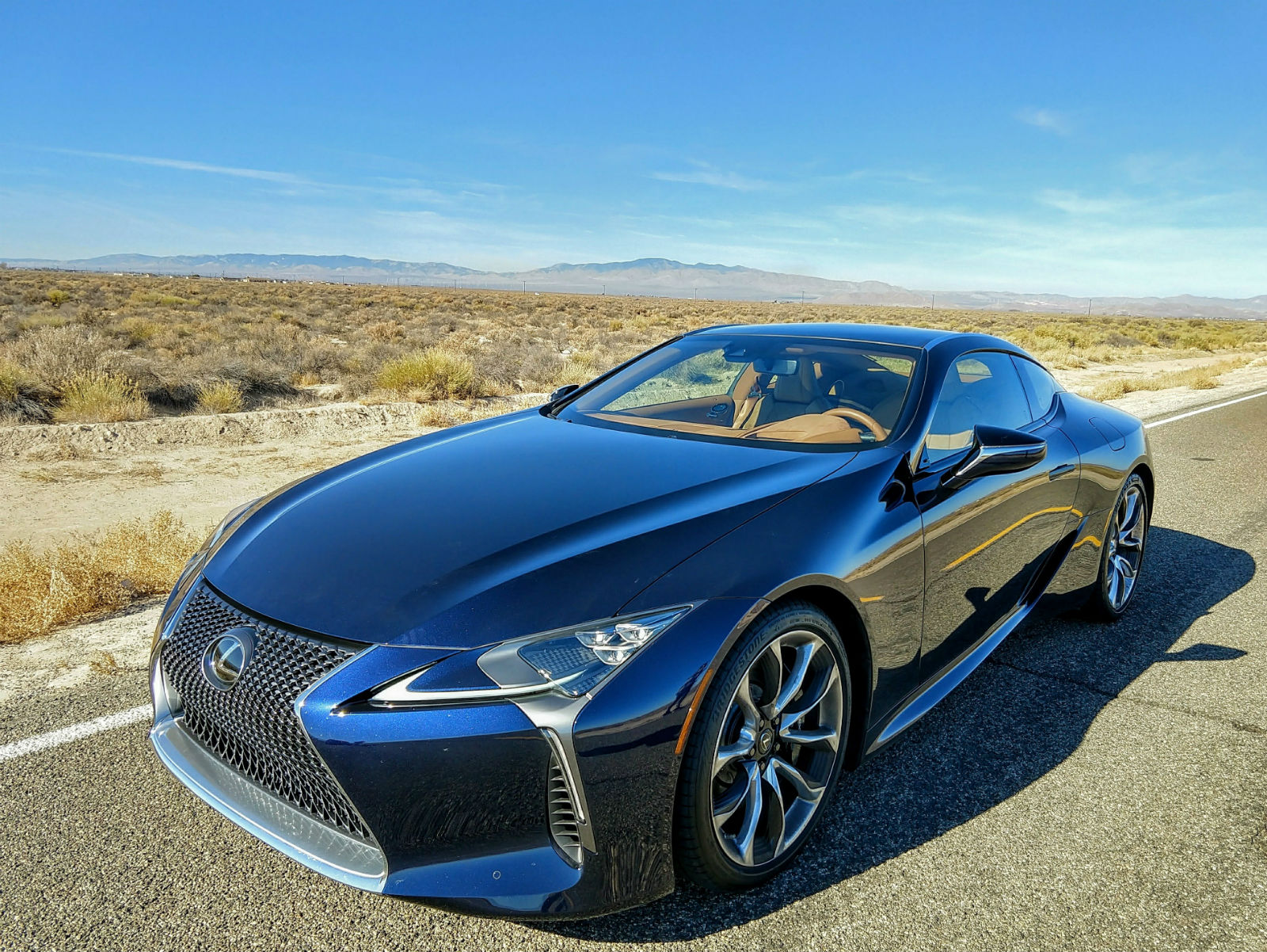 What makes a car stand out above the others? Vehicles like the Motor Trend “Car Of The Year” Alfa Romeo Giulia and the luxurious Volvo S90 sedan certainly impressed us and even gave the Germans a bit of a scare this year. But for various reasons, including rather poor reliability in some cases (sorry Alfa), all the other vehicles we tested failed to capture our total admiration. To truly stand out, a car has to be significant not only to its brand but to the automotive industry as a whole. For us, the Lexus LC 500 meets all of those requirements and more.

Sure, our choice for 2017 may not be as practical as the Mazda CX-9 we chose last year, but its value in the segment makes the $100k price tag of our 2018 LC 500 seem downright reasonable. The Grand Tourer or “GT” category, in which the Lexus LC 500 competes, includes vehicles like the $200k Aston Martin DB11 and the $130k Maserati GranTurismo. In order to stand out from that rather prestigious crowd, the LC 500 takes the latest radical design theme from Lexus and dials it up to eleven. The LC 500 features sinister LED headlights, a wide-mouth spindle grille, ostentatious 21-inch chrome and black wheels, and a rear end that looks like Megatron’s face. For us, the new design language finally puts Lexus on the map for many buyers and removes the brand’s boring reputation. In a way, Lexus’s existence in the US closely mirrors the stereotype of a “preacher’s daughter.” Early cars were refined, mundane, and focused on reliability. In the last decade, the brand has let down its hair, shortened its skirt, and completely rebelled against the past perceptions of the general public. Sure, the limited-production Lexus LF-A in 2010 may have been the “jet black hair dye” for the brand, but this LC 500 is the “lower-back tattoo.” 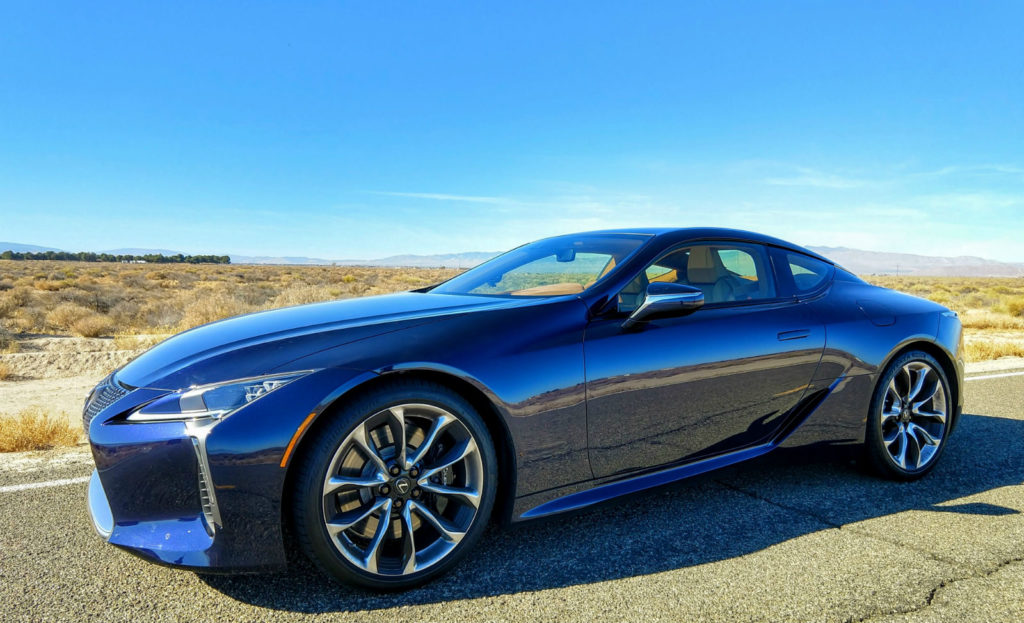 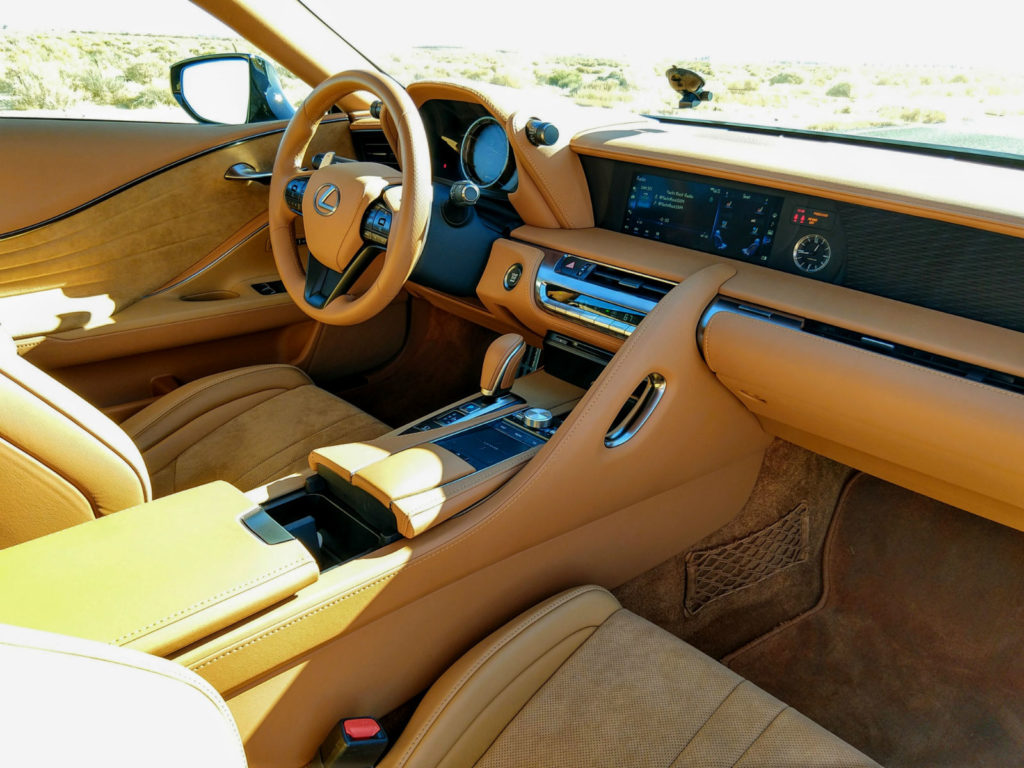 On the inside, the dramatic styling continues with a Toasted Caramel interior that pairs perfectly with our Nightfall Mica blue exterior. Both driver and passenger are wrapped in a warm, tan leather and Alcantara with seats that are the perfect blend of both comfort and sport. The LC 500 was recently recognized in Ward’s 10 Best Interiors in 2017 for its premium materials and dramatic lines in the doors, dash, and throughout. At night, white lighting accentuates the lines on the inner door and add to the theatrics of driving in an LC 500.

The center console holds a trackpad with haptic feedback to control the media screen like a mouse cursor on a computer. Perhaps expected from the company that included a cassette player in a car up until 2011, the media system is less than intuitive. Simply discovering the settings for the heated and ventilated seats took several days. Aside from the media center, the interior cabin makes for a perfect grand tourer with plenty of space and a crisp 915-watt Mark Levinson Reference Surround Sound Audio System. This comfort does not apply to rear passengers, however, as the rear seats exist only on paper and shouldn’t be used by humans.

The LC 500 is full of unique styling elements and the gauge cluster is the pièce de résistance. Turning the dial from Comfort to either the Sport S or Sport + mode changes the center gauges to a vivid white and red readout showing the RPMs. When browsing vehicles settings in the left portion of the gauges, the metallic center ring physically shifts to the right. This may seem simple but just goes to show the level of detail that went into the LC’s design. Out back, the rear taillights feature a single LED bar with a mirror to create an “infinity” effect that looks as if you are staring into a black hole with an endless row of lights. For truly unique styling you can also order the LC 500 with a wild Bespoke White interior that looks like something out of a concept car. 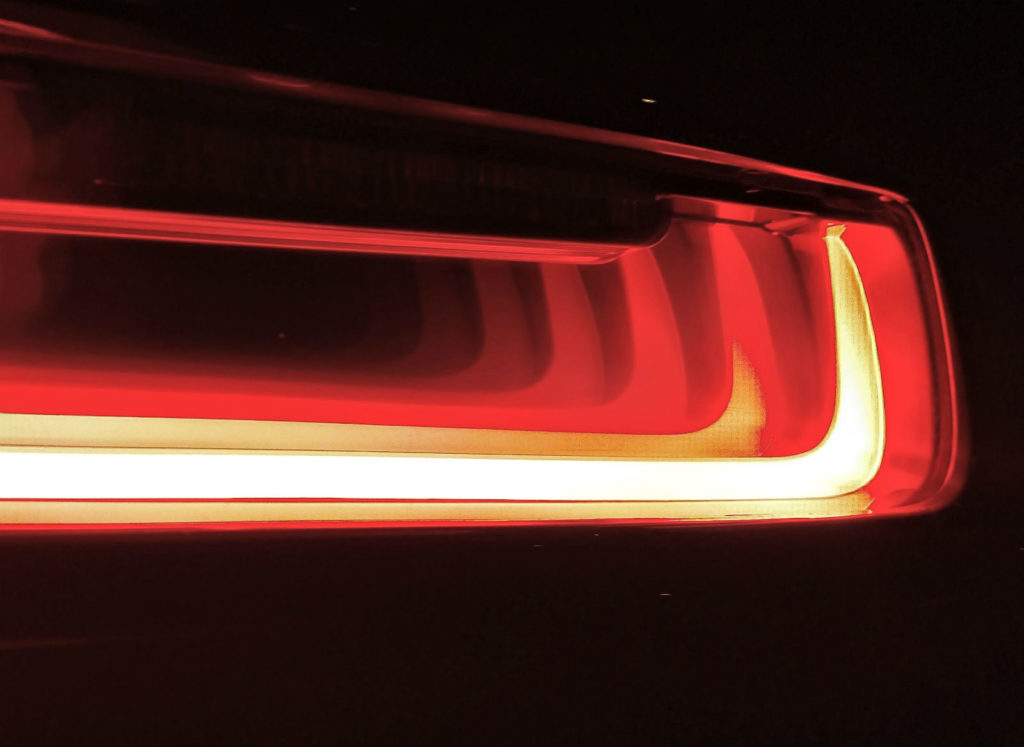 One press of the “Engine Start” button is all it takes to realize that this isn’t your father’s Lexus. The grumble of the naturally aspirated 5.0L V8 leads you to believe that the LC has more than only 471 horsepower. Setting off, the LC 500 rapidly shifts through the 10-speed transmission and makes better use of the engine’s power band than the eight-speed in the RC-F and GS-F. The LC 500 is no slouch with a 0 – 60MPH time in 4.4 seconds, but the LC’s speed doesn’t stand out in a world full of 700 horsepower muscle cars. Unlike the Hellcat, the LC 500 can take advantage of all its power on a backroad without ending up arrested or in a ditch. The car reacts quickly to accelerator input in any driving mode and made for a rather pleasing cruiser on our long trip up California’s Grapevine.

The Lexus LF-A may have been the “jet black hair dye” for the brand, but this LC 500 is the “lower-back tattoo.”

With a front-biased weight balance of 54/46, the Lexus LC 500’s 4,300 lb curb weight is apparent at the limit. Despite that weight, the LC 500 can navigate up a twisty mountain road at speed, echoing a few deep exhaust notes all the while. The paddle shifters react quickly and even shift several gears at once if the computers sense that dropping from 7th to 6th won’t be enough power. The transmission may not be as fast as a dual-clutch system but it worked as expected during our testing and you start longing for each upshift just to hear a cackle from the exhaust system. Altogether, the Lexus LC 500 makes for an extremely balanced and exhilarating driving machine.  Other cars in this segment may be faster or offer slightly more comfort, but nothing beats the LC 500 as a complete package for the price. Lexus has taken the advanced engineering and fit-and-finish attributes from its past and blended them with some “wild child” performance and style elements that move the brand into the future. With the LC 500, Lexus has built the sensible sports car and we applaud them for it. 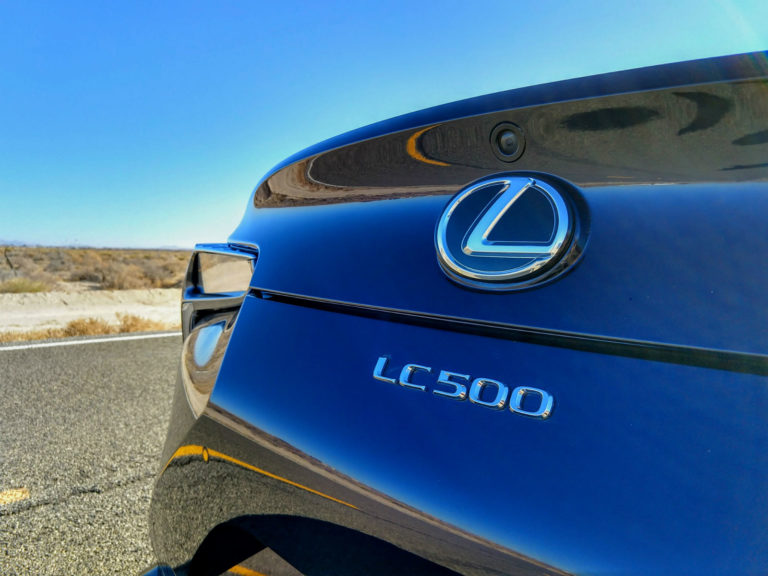 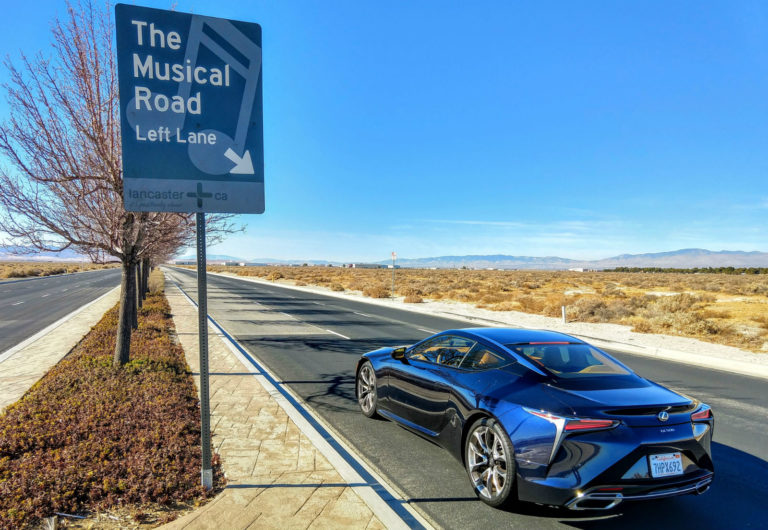 Watch the video below of the LC 500 on the Musical Road in Lancaster, CA