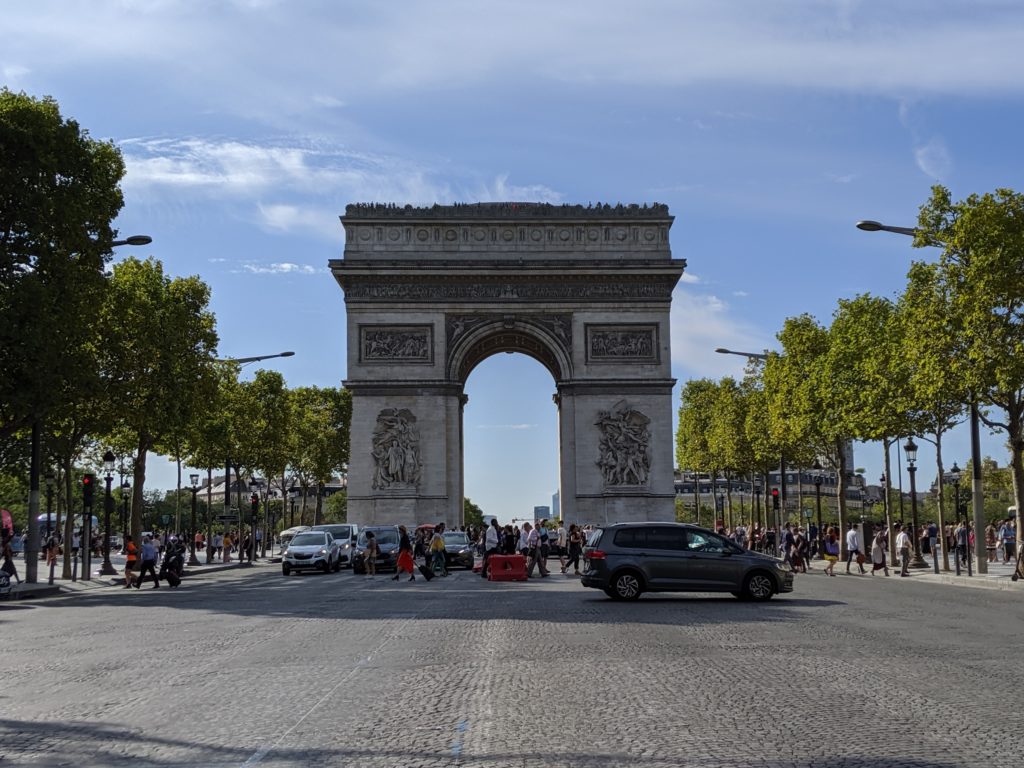 Some kids collected baseball cards or comic books growing up, but yours truly amassed automotive magazines and spent time memorizing every car make, model, and trim level in the US. This would lead to hours of entertainment on long family road trips as I would point out various Fox-body Mustangs, elusive Dodge Stealth R/Ts, and assorted domestic metal that were highlighted in various issues of Car & Driver or Motortrend.

I prided myself on knowing every car on the market, even the newest models. However, the internet quickly introduced me to small clips from a show in the UK known as Top Gear. I still remember firing up Kazaa and downloading what would be a life-changing clip of Tiff Needell piloting a McLaren F1 — this exact video, in fact. Collecting and studying these clips became a new addiction as I was introduced to a whole new group of strange European vehicles through the various hosts of Fifth Gear and what became the legendary Top Gear trio.

Therefore, a trip to Europe leads to me pointing wildly at rather mundane looking vehicles on the road with far more excitement than I’d get out of the Mona Lisa. To me, it isn’t simply a crappy Renault Twingo but rather the car that Jeremy Clarkson once flipped upside down in a tunnel and drove on a hockey rink. I’ve decided to share a few of the assorted mix that we ran into on a recent journey for anyone with similar, foolish fascinations. 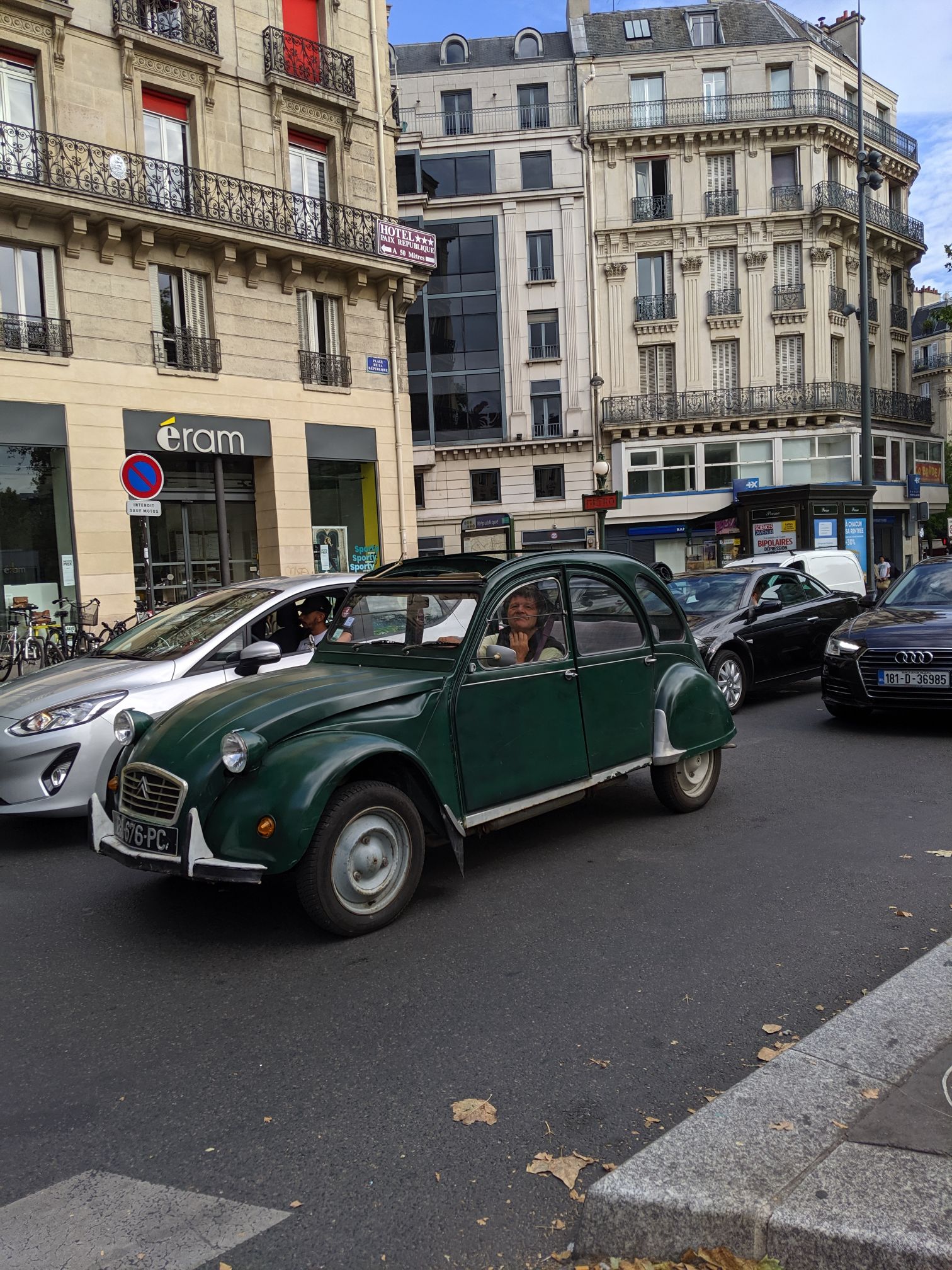 One of the most iconic French vehicles of all time, if not the most iconic, is the Citroën 2CV. The likeness of this vehicle can be seen scattered throughout Paris in the Cars 2 movie and is as French as a baguette. Not surprising, then, we crossed path with several 2CV on our walks through Paris.

Similar to a Chevy Bel Air cruising downtown in any quiet American city, we saw several older French gentleman and even a young family opening the canvas roof and enjoying the nostalgic charm of this Citroën. 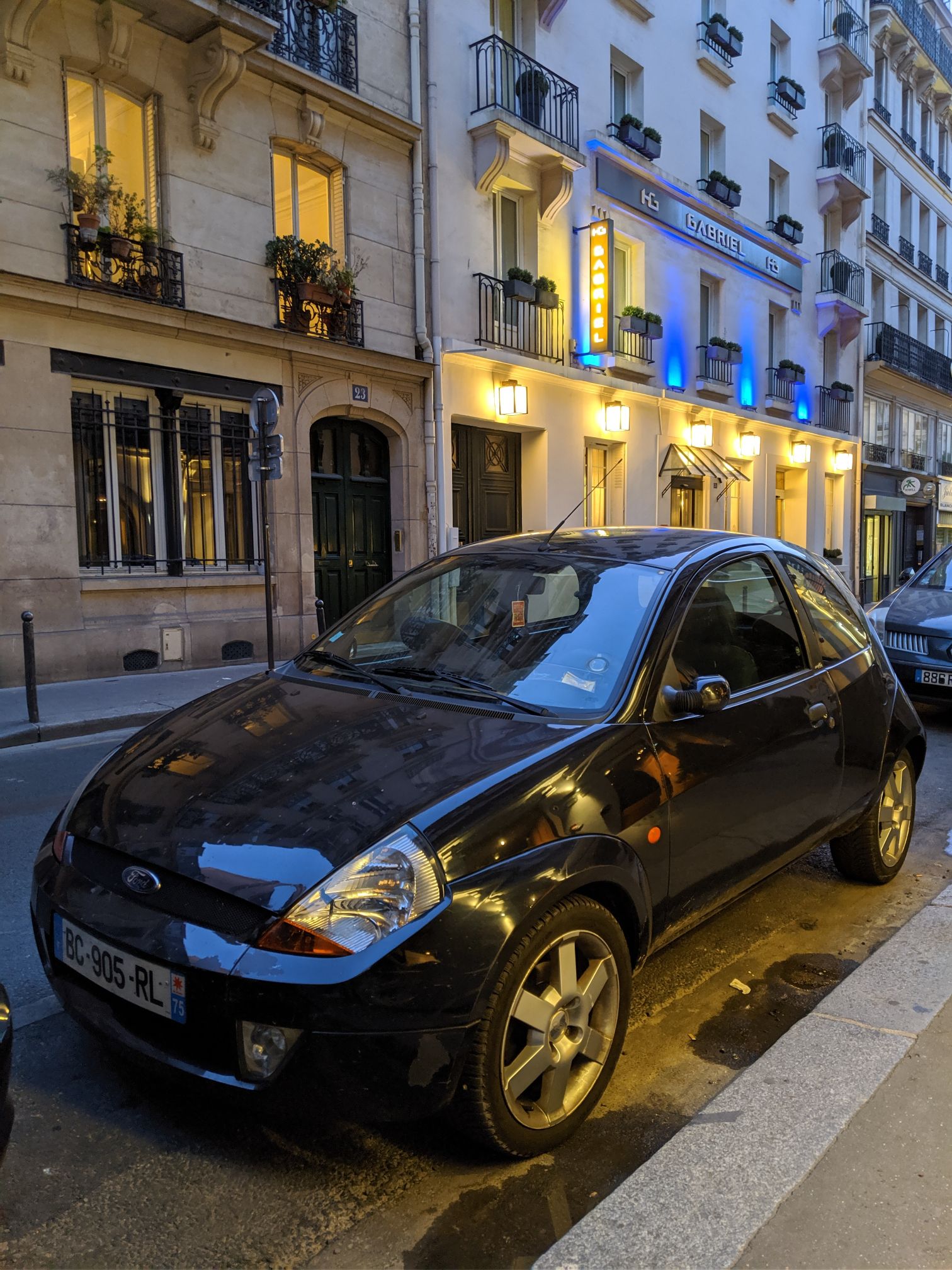 This banged-up and hard-traveled Ford Ka is exactly the type of European vehicle that is completely lost on the common passerby. But while those who are familiar see the Ka as an older, forgettable hatchback from the 90s, I see the exact same European Ford styling that would lead to the first Ford Focus.

I even remember this ancient episode of Top Gear with Clarkson introducing the quirky little car, or this “viral” commercial for the fantastic Ford SportKa that was emailed and shared across Limewire or Kazaa. 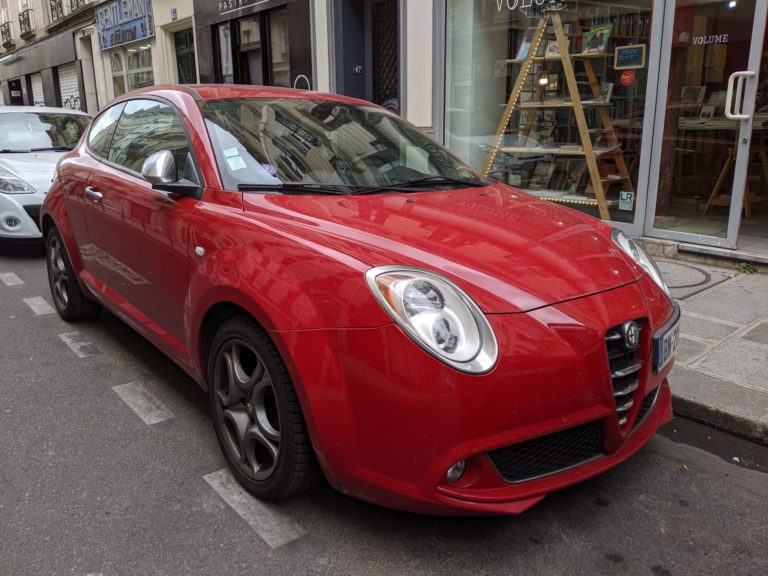 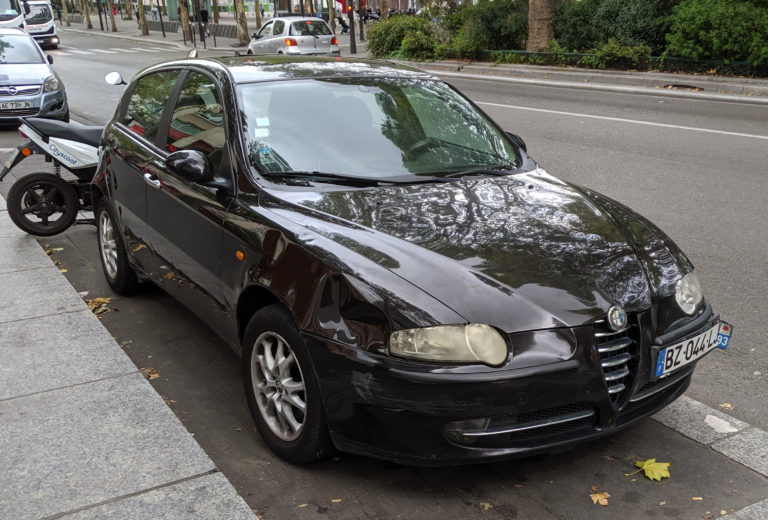 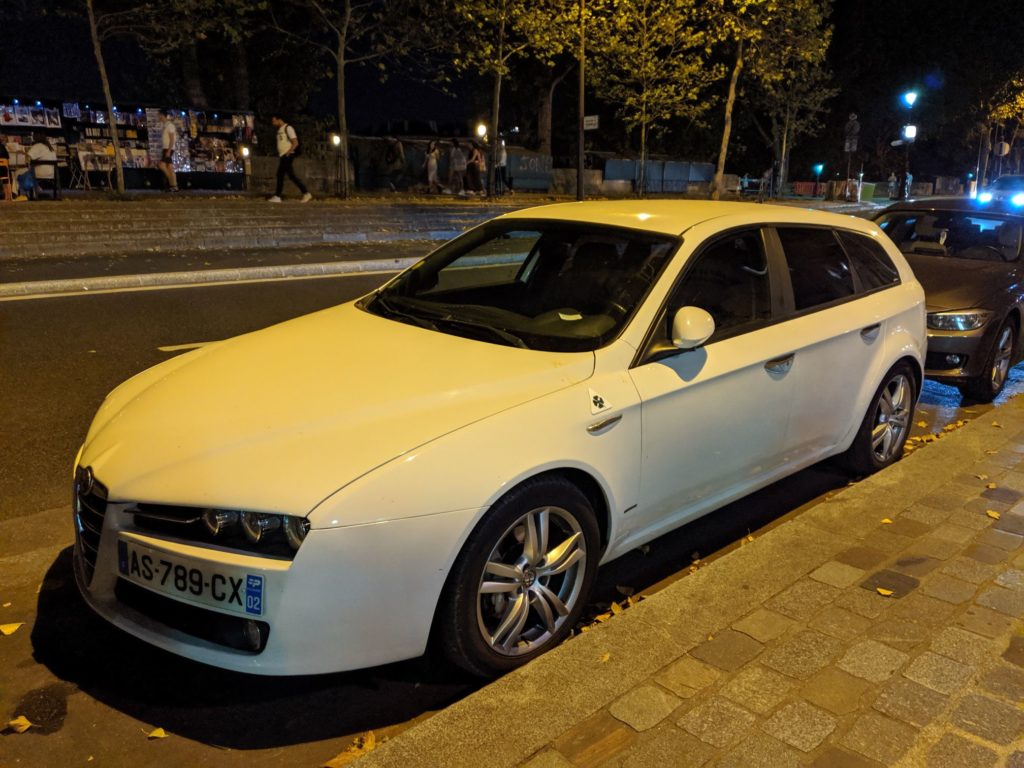 Clarkson, the legendary and controversial Top Gear presenter, famously stated that “you can’t be a true petrolhead until you’ve owned an Alfa.” While the brand was available from 1961-1995, the US has been void of the legendary Alfa Romeo brand up until 2017. To prove my love of Italian cars and to earn my “petrolhead” badge, I picked up a Stelvio in 2018 and understand some of the magic behind the brand.

While the first lowly, black Alfa 147 coupe that I captured may hint that we hadn’t been missing much in the past couple of decades, the white Alfa 159 Sportwagon absolutely stopped me dead in my tracks. A lack of both Alfa Romeos and wagons in North America makes this particular vehicle the ultimate forbidden fruit. And while the red Alfa MiTo hatch looks somewhat similar to the modern Giulia or Stelvio, this fun little car is missing from our local dealerships as Americans have turned away from compact cars.

Amongst the trendy row of shops on Avenue des Champs-Élysées sits the L’Atelier Renault Café. A showroom, restaurant, and cafe showing various Renault vehicles from past to present. While we visited, you could see a replica Formula 1 car, a retro-gone-electric Renault E-Plein Air, various Clios, and the Renault Mégane R.S. Trophy-R that holds the FWD Nürburgring record.

After some small bites and a coffee, you can pick up various Renault-branded merchandise to celebrate classic cars like the Renault 5 Turbo and Clio V6. 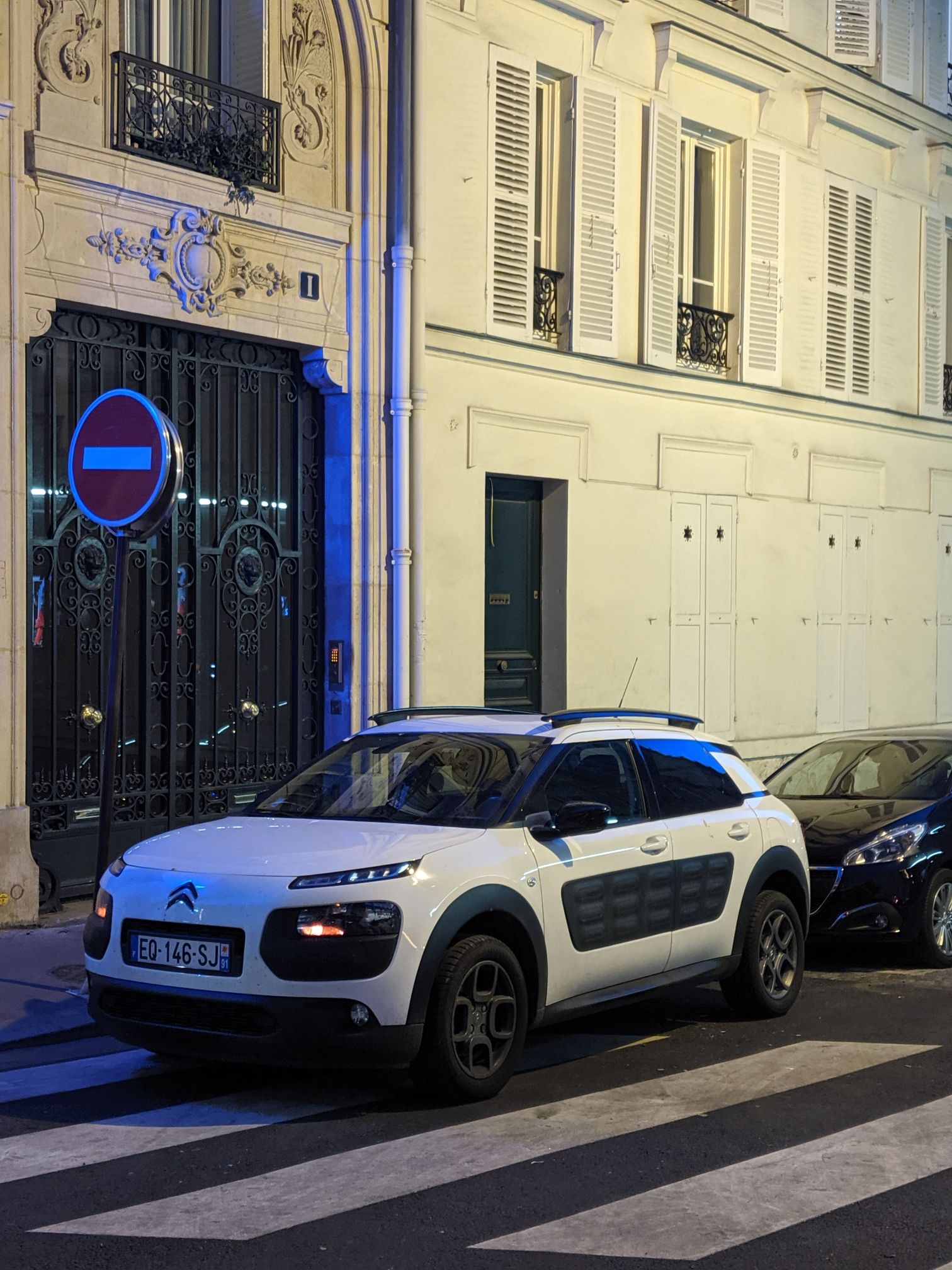 Outside of Renault, the “big 3” of French brands also includes the Citroën and Peugeot brands from the PSA Group. This funky Citroën C4 Cactus has an exterior clad with plastic to match its funky name. Seeing photos online don’t do this compact SUV justice as the modern styling transfers to the interior with well-designed plastics and seating materials.

While other brands in the US like Hyundai and Toyota try to be fun and unique, nothing quite captures that spirit as well as this plucky little European. 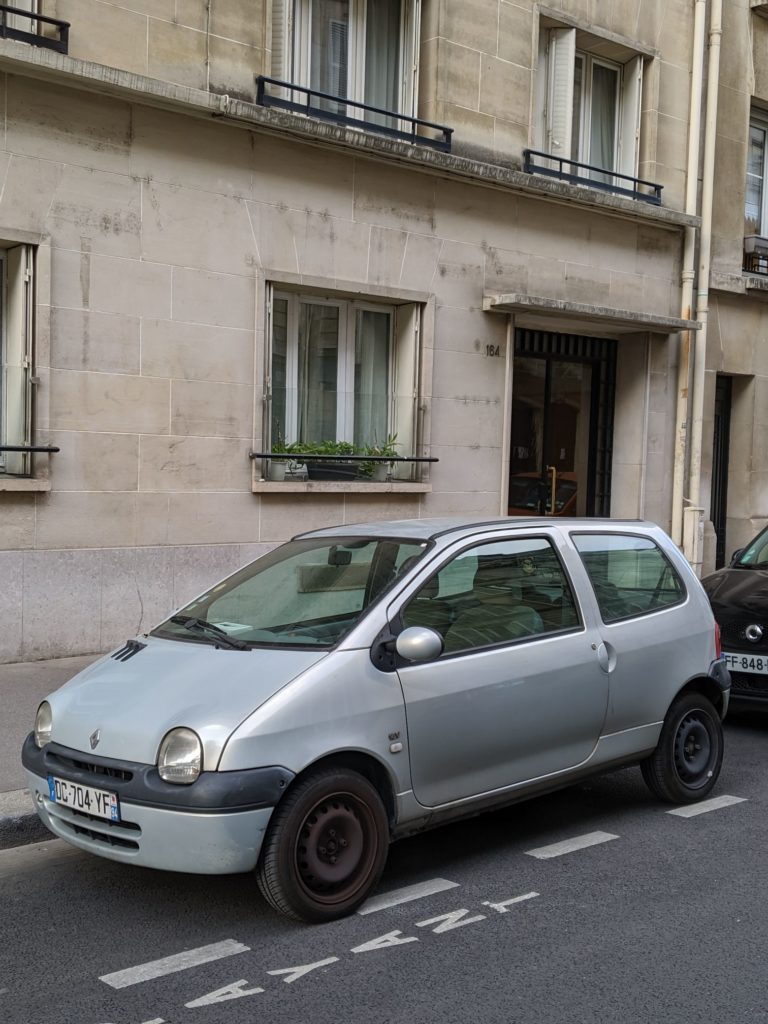 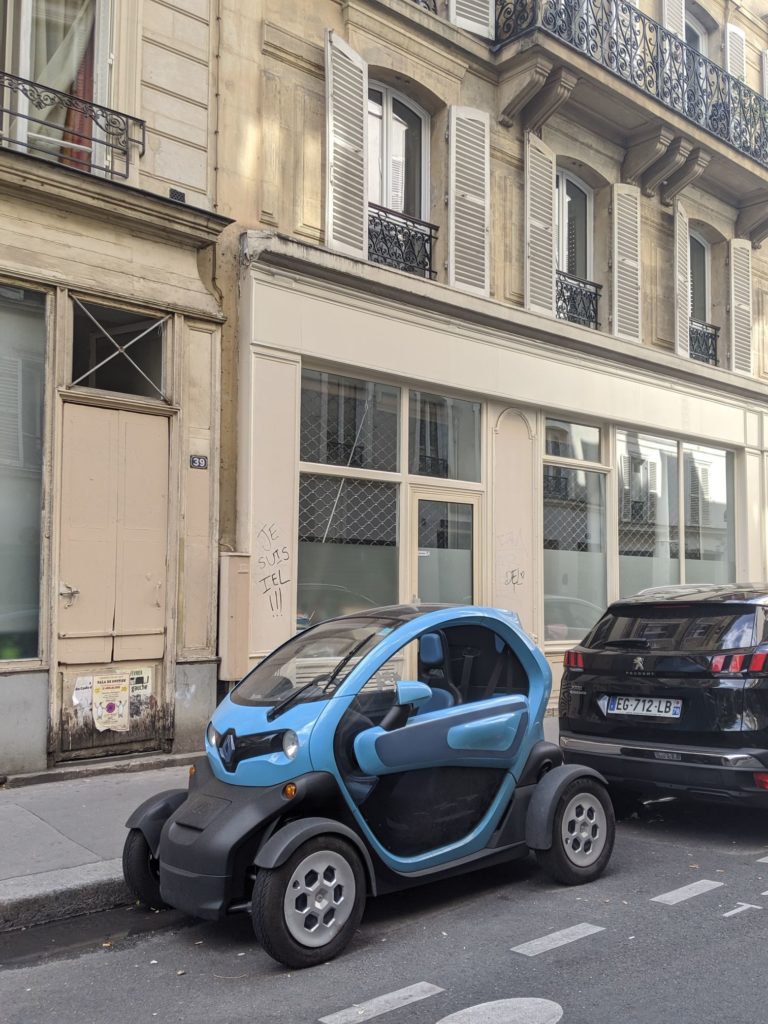 Doubling down on French-levels of quirk are both the classic Renault Twingo hatchback and the electric Renault Twizy. The Renault Twingo is the everyman mode of transportation in France and littered the back corridors and highways surrounding Paris. The design is simple, but small details like the three holes that intake air for the HVAC system and the rather adorable front headlights make for one of the most distinct French cars ever made.

On the opposite end of the spectrum, we have the extremely radical Renault Twizy. With its 1+1 inline seating configuration, this electric city car is a precision tool to navigate heavy Paris traffic. This particular vehicle was also introduced to me through a Top Gear episode where James May pilots one through St. Petersburg in a race against the Stig on public transit and Richard on a bicycle. A slight step up from the bicycle, the Renault Twizy is the perfect blend of quirky and simplistic European styling that exists as a complete contrast to something like the average American truck or SUV. 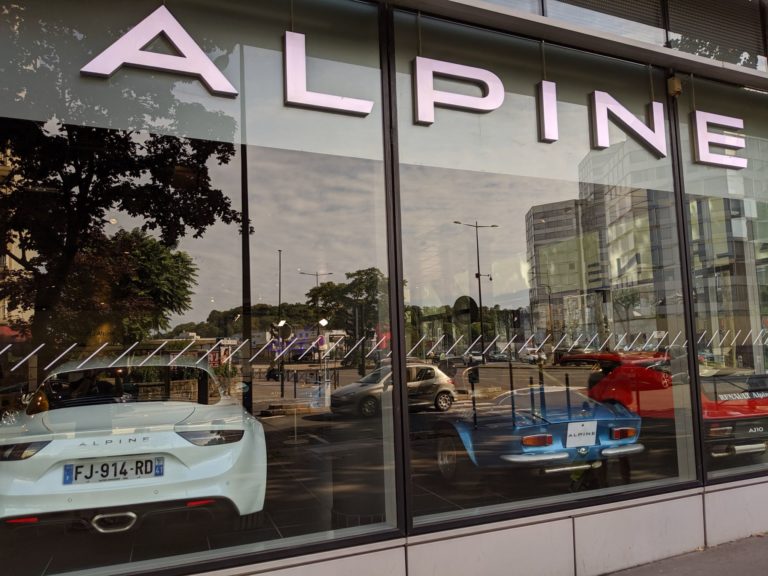 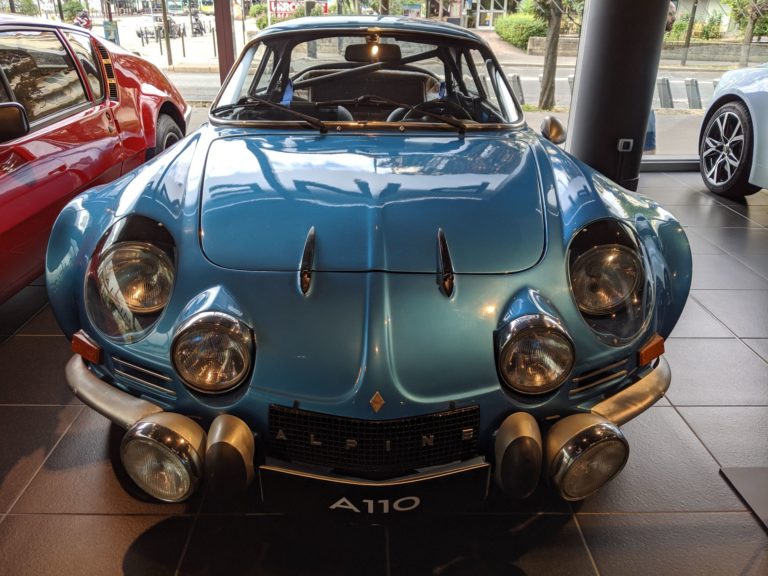 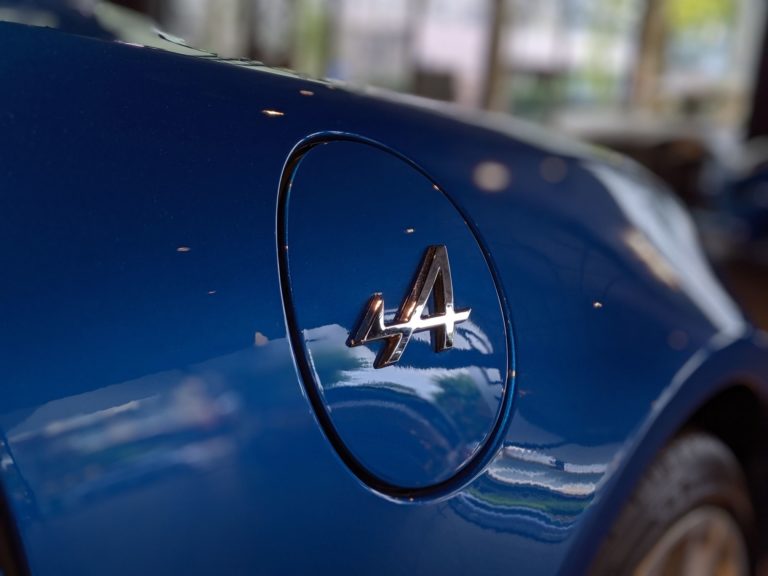 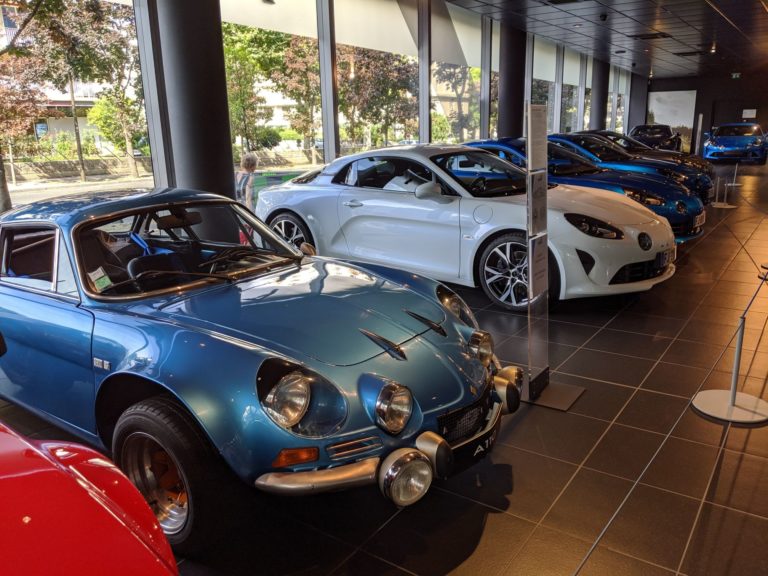 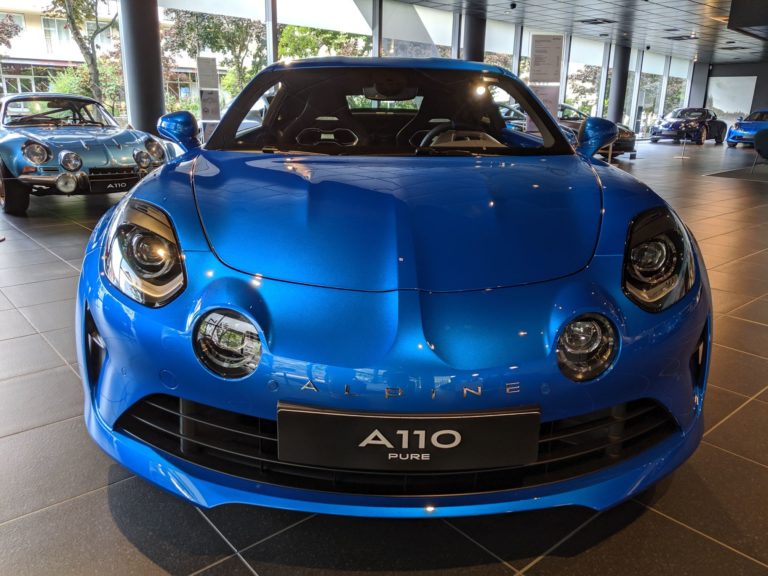 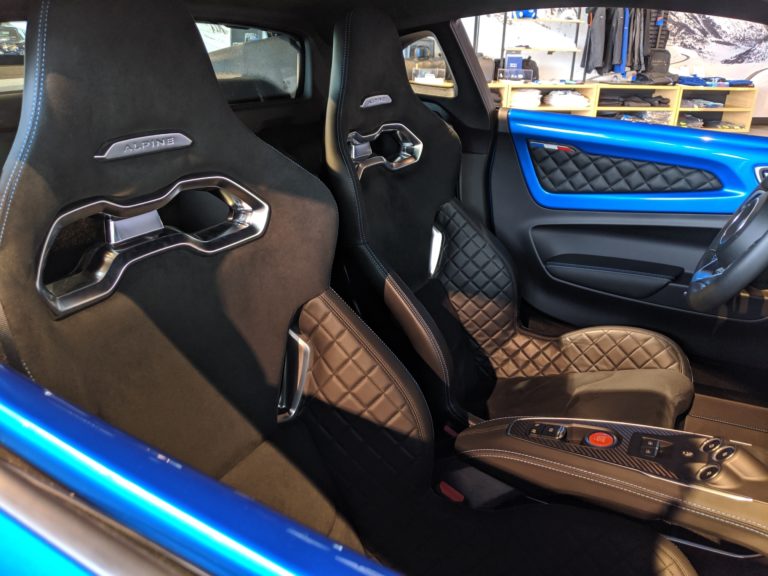 One of the most legendary French cars and my personal favorite is the Alpine A110. Originally made in 1961,  the A110 would reach legendary status for its rally success in races across Europe in the early 1970s. The company was purchased by Renault in 1973 but shut down operations in 1995 after making the Alpine A610, which I find to be one of the raddest cars ever. The company teased a re-launch in 2012 for the 50th Anniversary with a partnership between Renault and Caterham. Several years later in 2016 the new A110 gave the brand new life and is now sold through Alpine showrooms across Europe.

The relaunched brand also partnered to create the successful Signatech-Alpine LMP2 team that participated in the European Le Mans Series, winning the championship in 2013. I’ve followed the progress of both the new racing team and A110 and couldn’t wait to drive out to Studio Alpine Boulogne, about 7 miles outside of Paris. Both the classic and new A110 were on display and we were able to sit in the car and fire up the turbocharged 1.8L engine. The staff was very generous to this enthusiastic American providing promotional materials and discounts on Alpine merch. 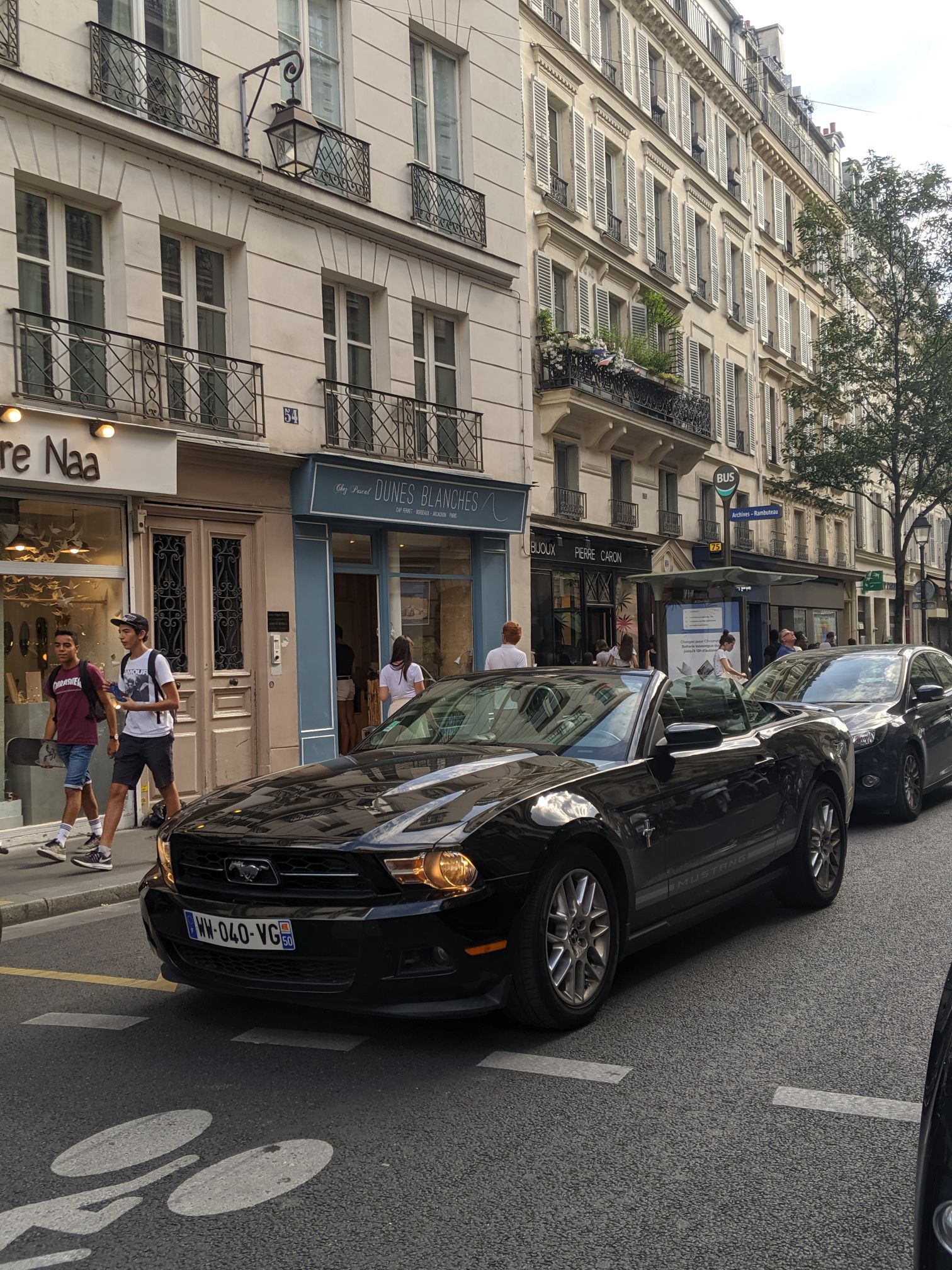 While this rather mundane Mustang wouldn’t catch your eye on the street in any average American town, the large black convertible really makes a statement in central Paris. Within the narrow corridors of the city, the scene looked more like a Hollywood backlot fit for Steve McQueen and the driver was beaming with pride when we stopped to capture this image.

I imagine I would have the same glow piloting any of the aforementioned unique European vehicles around the streets of Los Angeles and truly enjoyed the change of automotive scenery.