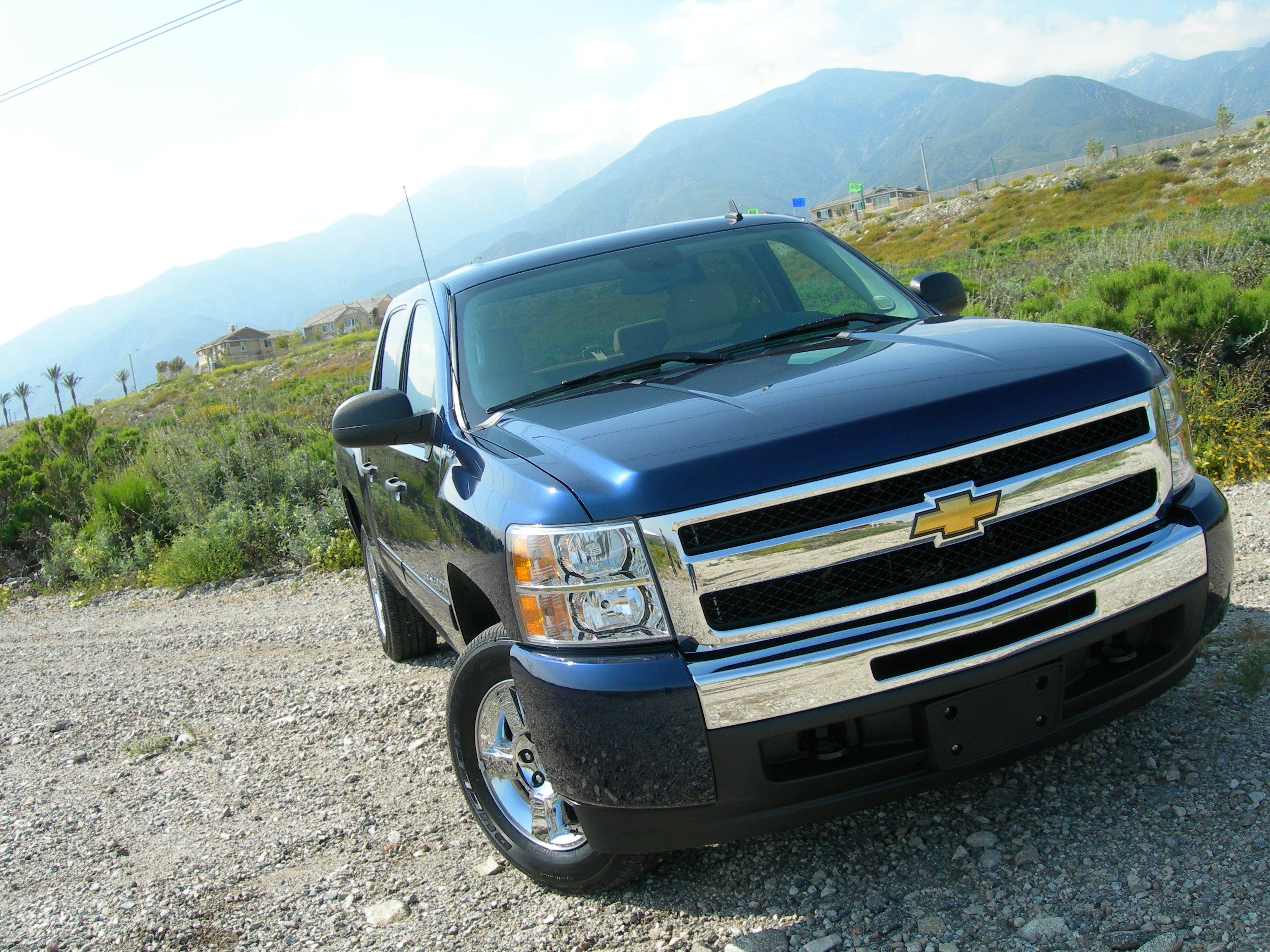 Merle Haggard, famous American Country music singer, guitarist, and songwriter, was born in Bakersfield, CA in 1937. While he spent most of his adolescent years in jail, he found solace in Country music. He, along with Buck Owens, contributed to the “Bakersfield Sound” of Country music in the early 1950s. The Southern California Country music scene has struggled to find its footing since then. People began to migrate from the small towns like Bakersfield and Modesto into larger cities, where they traded in their cowboy boots and hats for Nikes and Baseball Caps, their 4×4 trucks for econobox hybrids. However, there is a glimmer of hope for Country fans in Southern California; it lives somewhere within the hearts of the 50,000 people in attendance at the 2010 Stagecoach Festival in Indio, CA. What better way to truly enjoy the pilgrimage to this Country Mecca than in the 2010 Chevrolet Silverado Hybrid? As Miley Cyrus would say, “It’s the best of both worlds.” It seems to be a happy medium for those city folk with Country in their hearts. So, we saddled her up and headed to Indio. 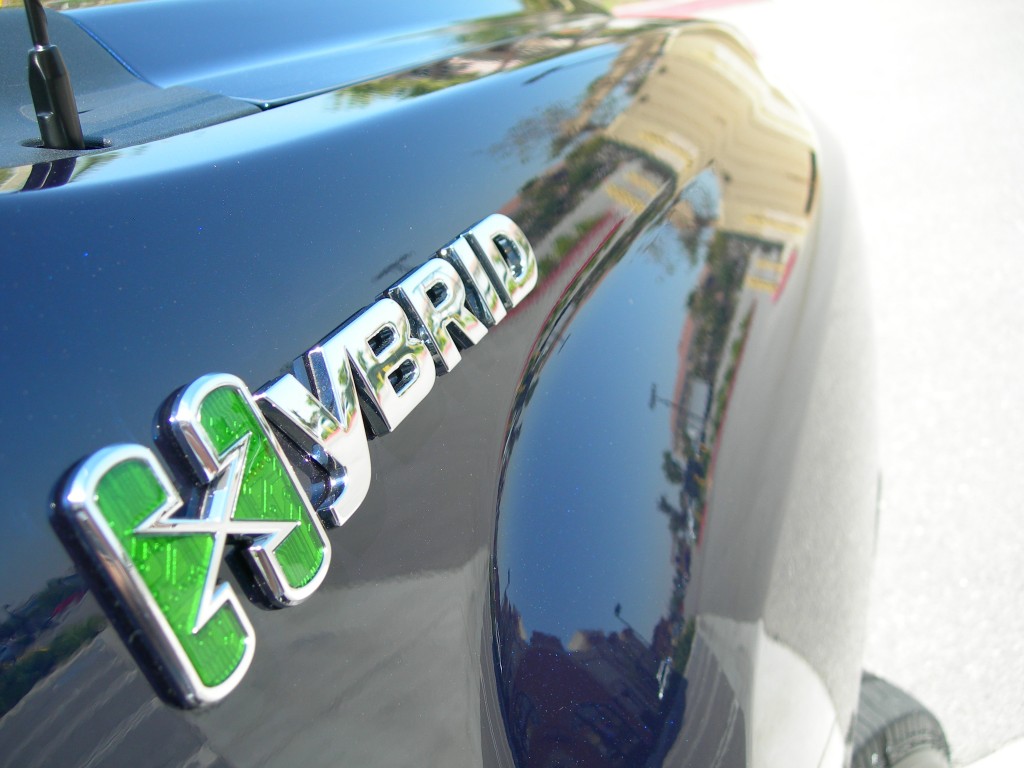 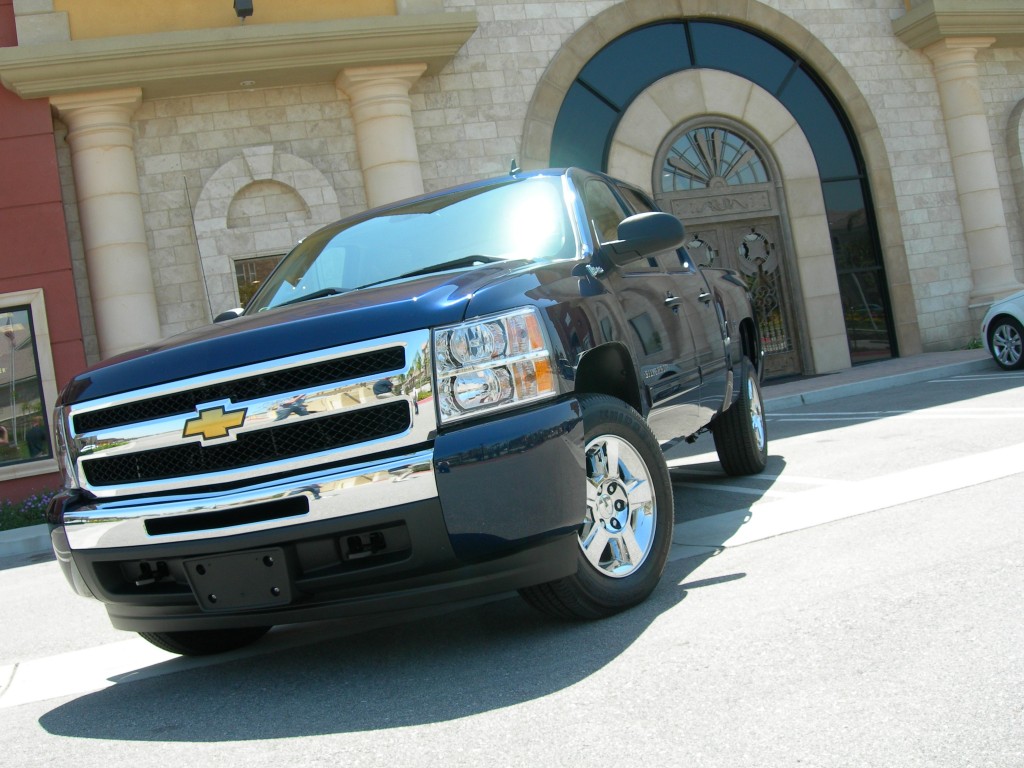 The Silverado Hybrid is a truck that tries to be all things to all people. It has seating for up to 6 people, a 332 hp V8, yet has a 2-Mode Hybrid powertrain which will give you gas mileage of about 21 city and 22 highway. So in order to test this vehicle, we figure we would load it up with 5 people and their bags and head out east (of Los Angeles). The interior room in this vehicle is very adequate for long trips and the passengers in the back seat had plenty of room with three adults. The Silverado had 11 cupholders, as every true American car should, so that when seating for 6 was needed… 6 cupholders remained… pure engineering genius. The view from the driver’s seats gives you a look at all the different gauges, including an “economy” gauge. I found this mostly useless because it would take a very special person to not know that the gas mileage improves when you’re not pounding down on the throttle. The digital display was useful and showed your instant fuel economy and the stages the engine was in including “v4” “v8” and “auto stop” modes. The audio system had XM Radio, an AUX port, and the standard single CD, AM/FM defaults. My only gripe with the system was the lack of any USB capability that nowadays you find standard in most of GM’s larger vehicles. The interior was soft to the touch and I found little complaints with the quality of most surfaces. My biggest gripe is the interior door handle… GM please move this at a height normal people feel comfortable reaching for. 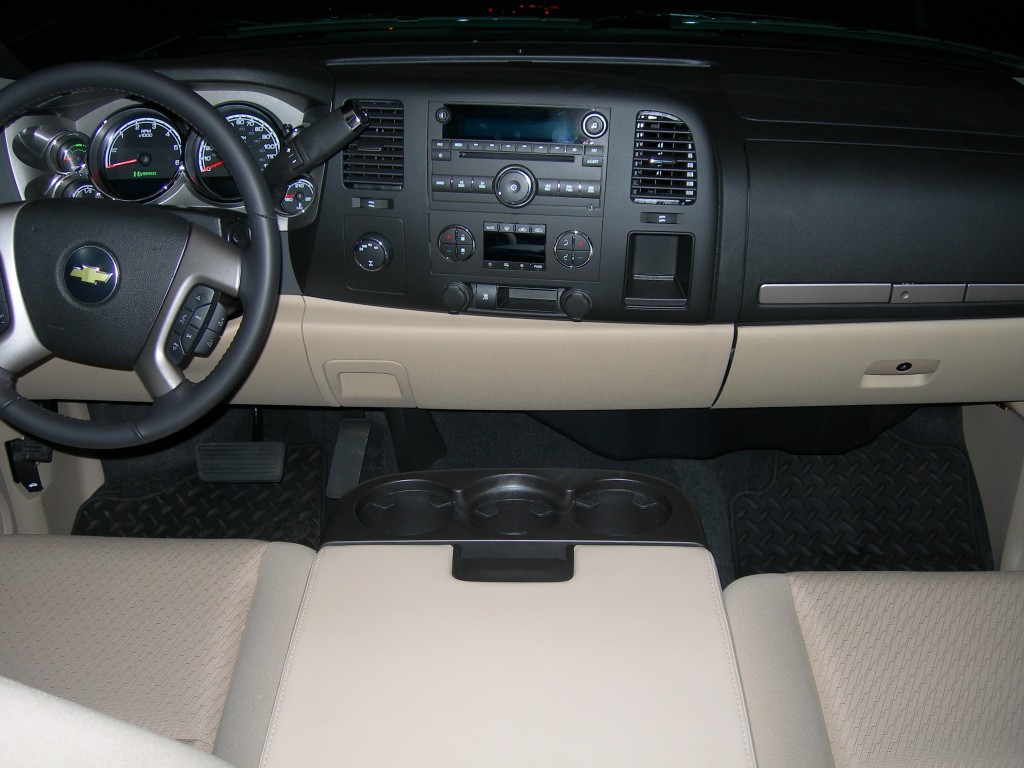 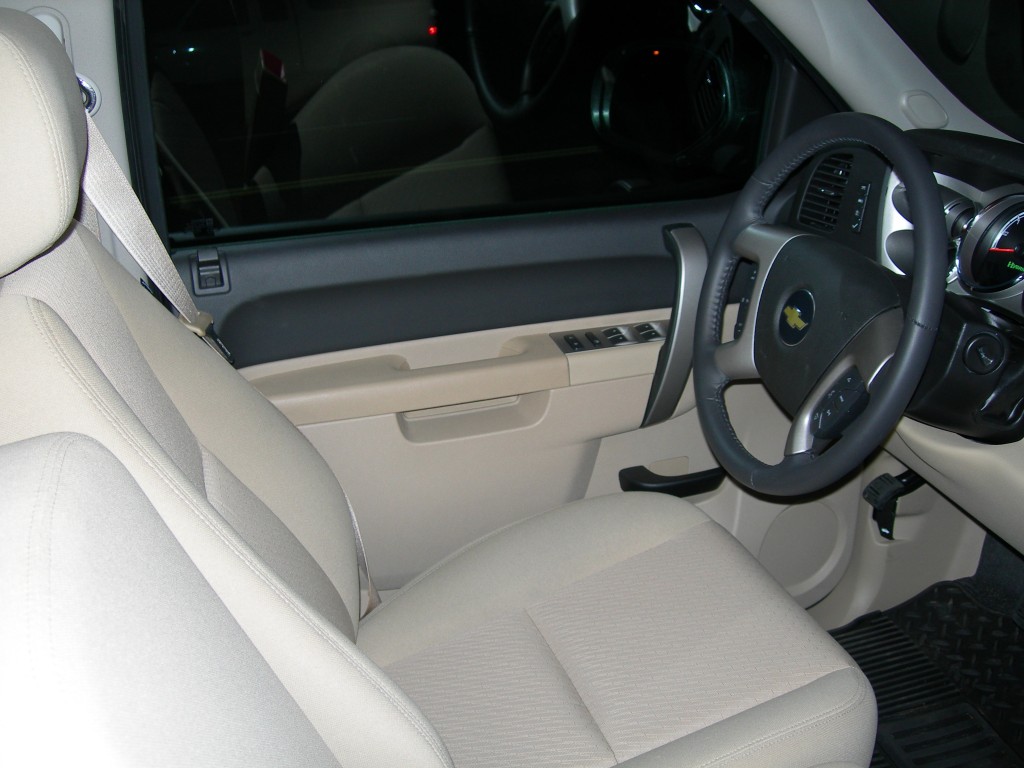 The driving dynamics of the truck are fantastic… you slowly forget you’re in a large pickup truck due to how smooth the ride is and the stunning silence in the cabin. Hearing a Silverado pull away from a stop sounding like a golf cart is something to behold, yet becomes the norm as you get acquainted with the hybrid powertrain. The hybrid motor is used when the vehicle is at rest and will power the car to a claimed “30 mph” with “light acceleration.” In reality, the system shut off when I hit around 14mph. Maybe I am simply unable to “lightly accelerate.” The transition between the hybrid and gasoline engines is usually smooth but is more noticeable and almost harsh when accelerating quickly from a stop. The benefit of the hybrid system is seen in stopped traffic or throughout the city while resting at lights. The majority of our trip was helped more by the Active Fuel Management system that shut down half the cylinders to give 4-cyl economy when cruising on the freeway. The only times the hybrid was really beneficial was sitting in a Del Taco drive-thru for 40 min and in the stopped traffic leading into the concert venue. 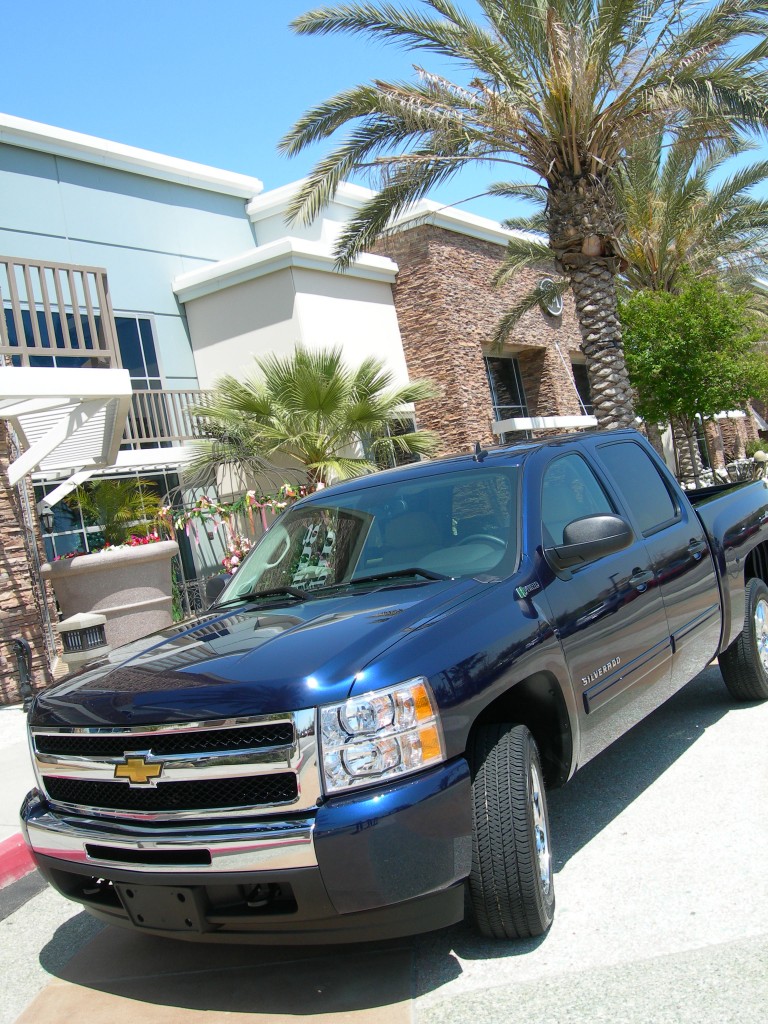 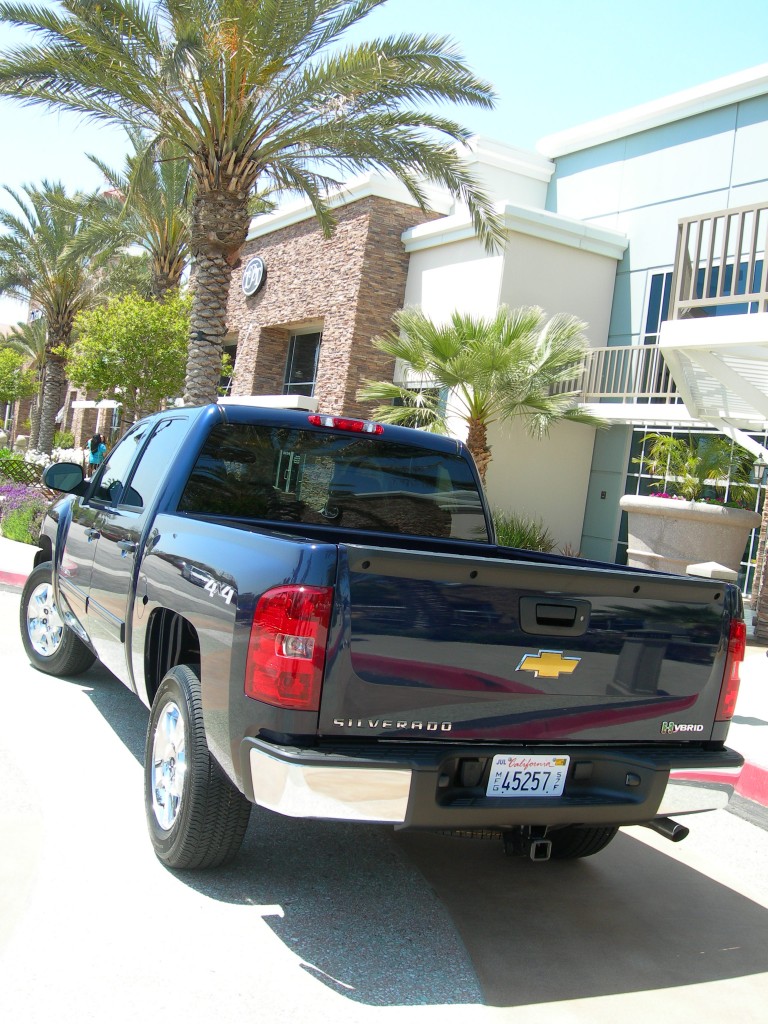 Leading up to the festival I felt myself acclimating into pick-up truck culture as I put on my boots and began driving the vehicle around town. I remember listening to the Joe Diffie song “Pickup Man” when I was younger and longing to climb up in the cab of a Chevy and instantly feeling superior to anyone else on the road. Even at 23 yrs I still feel like a child as I silently laugh at Corollas and Rav4’s driving by. “I could drive over a mountain if need be, can you?” I think to myself. As we drove into the grounds for the concert I received acknowledging looks from other truck drivers as they passed. These are my people now and they accept me into their club, me with my electric motor. This truck still looks the part of a Chevy Silverado despite its large green HYBRID badges on the fenders; this is important to the truck buyer. The Silverado Hybrid buyer doesn’t want to look like a Prius driving prick; they just don’t want to spend $400/month on gasoline. Owners also want a truck that can perform. In testing the 4-wheel drive on a trail, the truck was capable of keeping traction in most conditions and my only real complaint was the hybrid system hindering the initial acceleration out of tough conditions. I believe it can be disabled but didn’t bother with it too much. 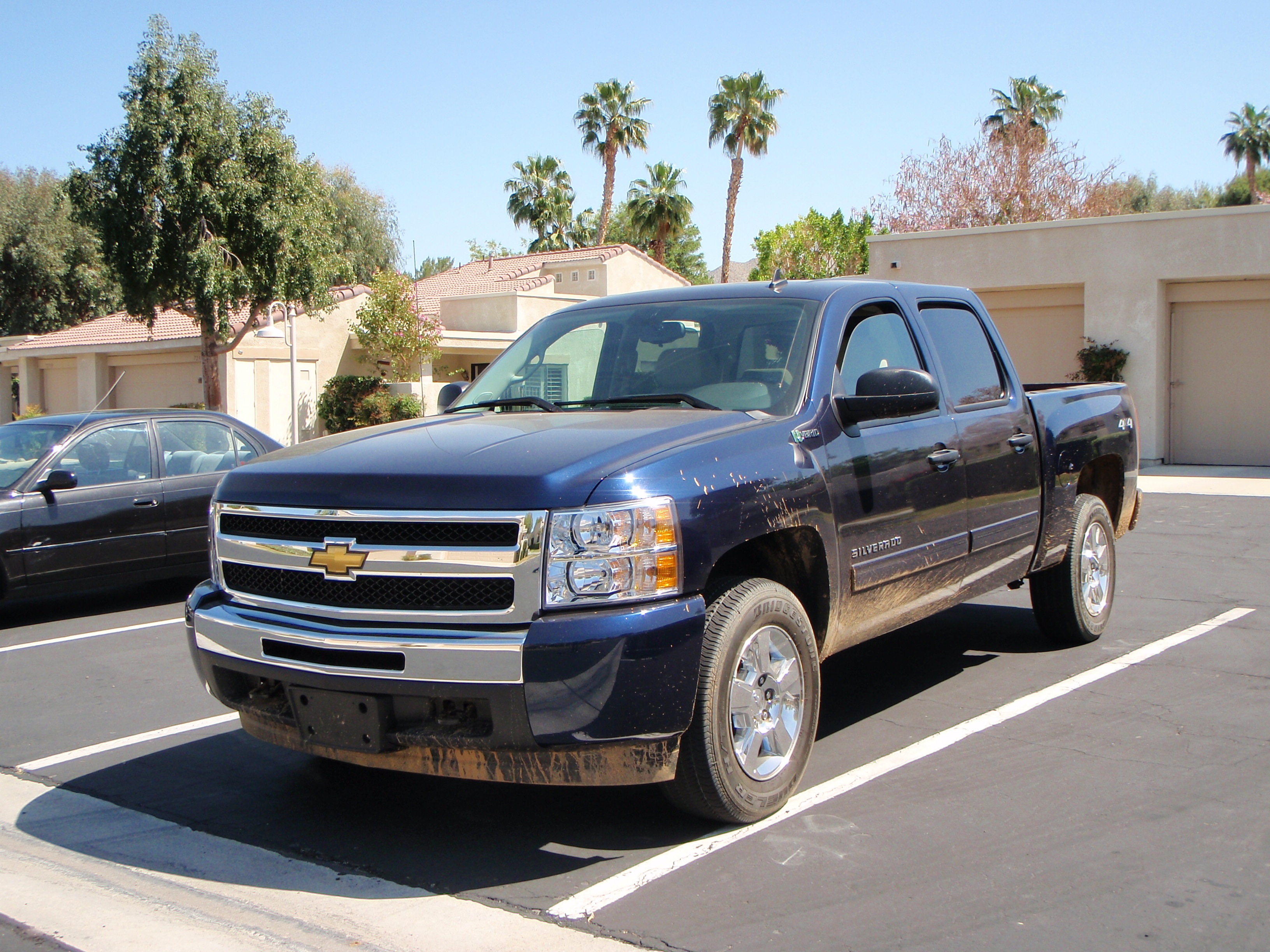 Overall, the 2010 Chevrolet Silverado Hybrid met or exceeded all of my expectations of what a truck should be.  I was excited to drive it every time I got the chance and didn’t have to worry about running to the gas station afterward. For someone who will do most of his driving in town and needs a vehicle with plenty of utility and room inside for the whole family, the Silverado is a fantastic decision. Pricing in at $42,485, the truck is no bargain, but will surely show its savings faster than many of the other hybrid versions of smaller passenger cars. The truck did everything that we demanded in the weekend of the Stagecoach Festival and it truly was a worthy chariot to the desert. After the music ended and the crowds swarmed out into the parking lot, a glimpse of the deep blue truck waiting among a sea of older pickups and the occasional hybrid was reassurance that things definitely changed out west…but the modern cowboys still exist, and Chevrolet still makes the truck they all love…it’s just much more practical now.