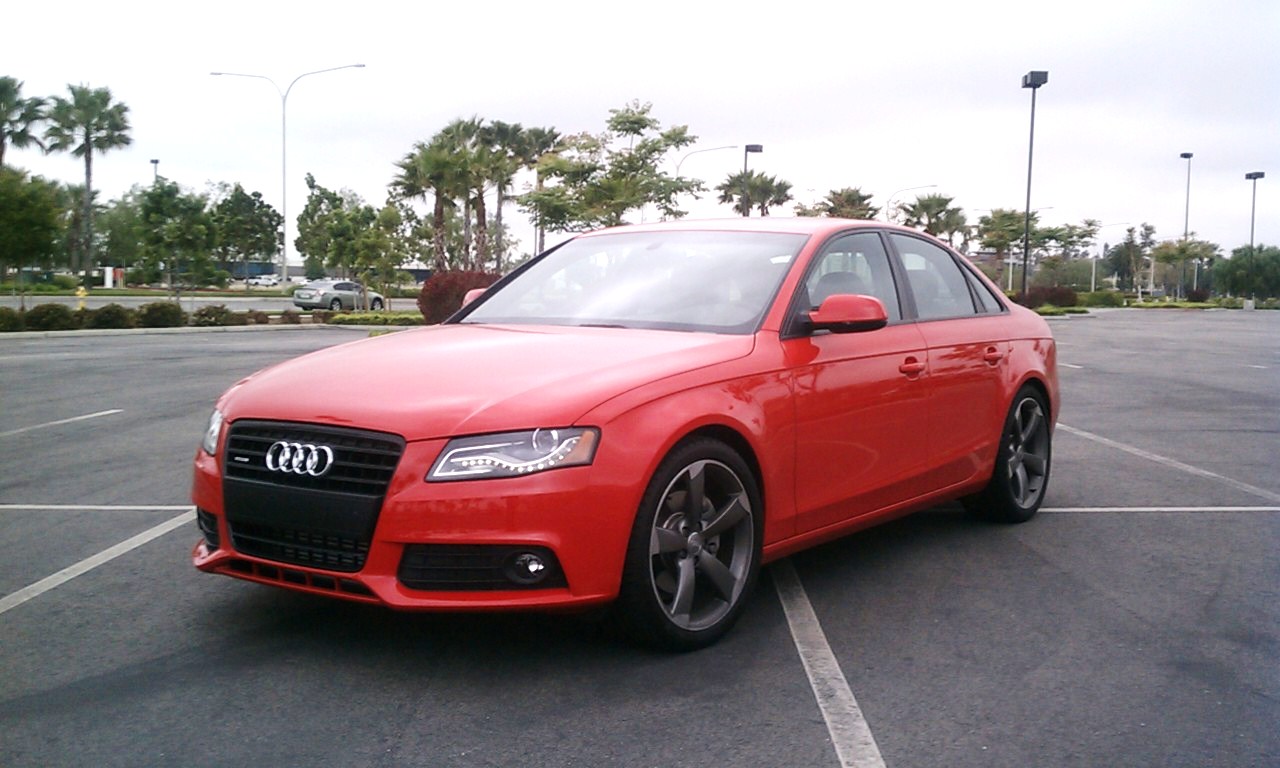 Manfred von Richthofen was born in Breslau, Germany in 1892. At age 11 he started his military training in the German army. As WWI began Manfred grew tired of not seeing much action and applied for the Imperial German Army Air Service. This would later be known as the beginning of one of the most impressive piloting careers in all of history, for Manfred would later be known in infamy as the Red Baron. The Red Baron would go on to 80 air combat victories, more than any other pilot, and would be known world wide by both sides of the war. The Audi A4 has made a similar rise to fame, going from just another attempt at a luxury sedan to a real contender and often front runner in the luxury segment. Just as the opposing pilots knew the markings of the Baron’s plane, the menacing front end and the signature LED headlights can be detected by any of the drivers in competition luxury sedans. We took this modern “red baron” out to the streets to see if it could truly soar with the best that the market has to offer.

Our bright red A4 sedan was equipped with the now standard 2.0 turbo 4 cylinder motor partnered with a 6 speed manual transmission. It had the Premium Plus trim and Sport Package which included sport suspension, black single bar grill, different black trim elements, and beautiful 19″ titanium wheels. The car has a very modern look and yet isn’t bold enough to offend many customers looking for a sporty luxury sedan. The interior leather seats and leather wrapped steering wheel are fantastic and offer a great deal of comfortability and practicality when the car is used to its sporting potential. The car was priced at just under $40k when all the extras are added into the mix. 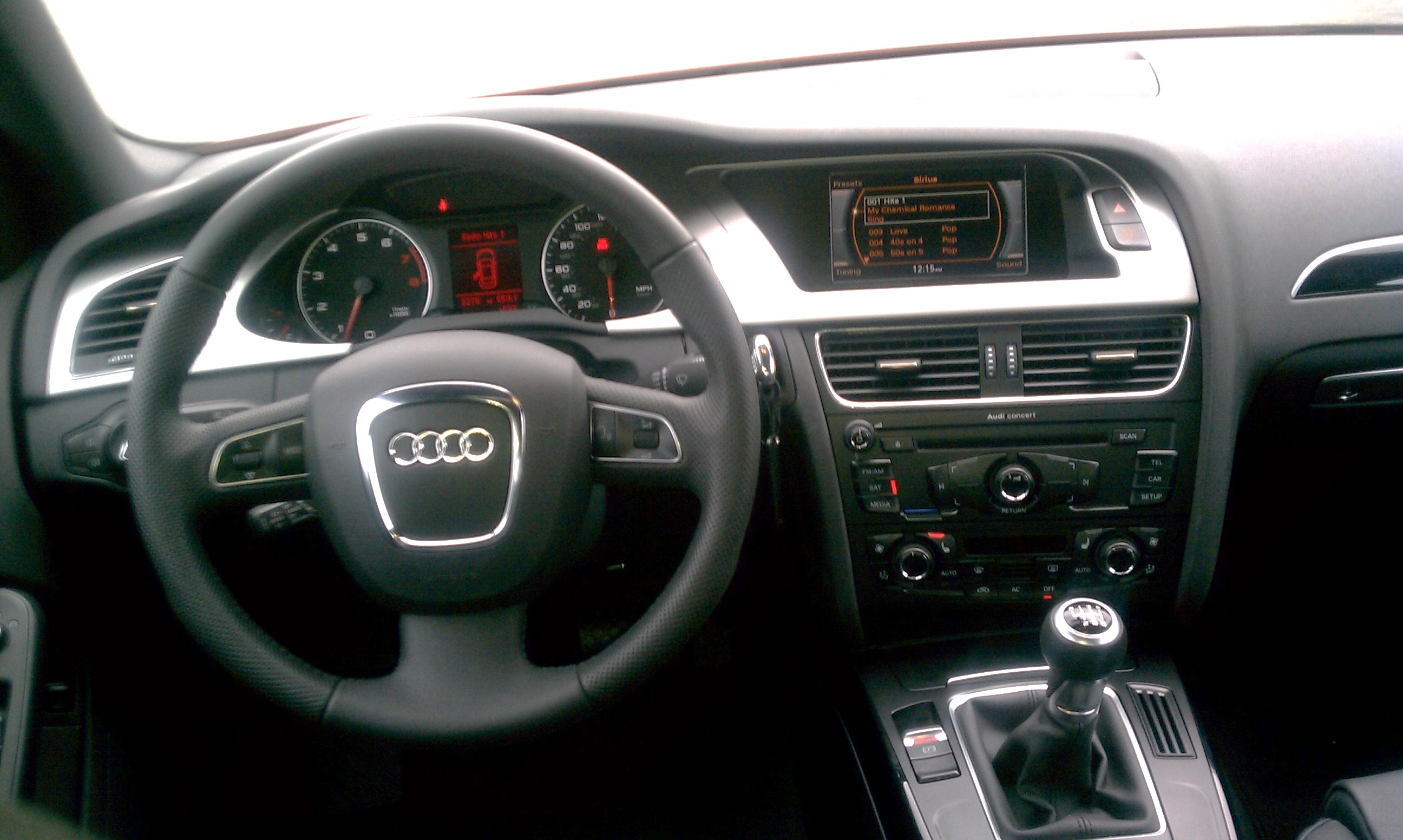 In terms of the overall driving experience of the Audi A4 it will not blow your socks off with the turbo 4 cylinder but it will definitely not have any trouble getting out of it’s own way and even putting a grin on your face in the higher RPM range. The manual transmission was extremely smooth and what you expect from a luxury sedan. The engine has a surprising amount of torque in the low end, 258 lb ft between 1,500 – 4,200 rpm, that gives you the feeling that the car has sporting potential. Unfortunately once up to speed the 211 hp often seems breathless and especially frustrating if you are cruising at 65 mph in 6th gear. Down shifts are a necessity on the highway if you have any hopes of accelerating to pass a slower vehicle. The 6th gear is truly geared for fuel economy over performance and I found myself leaving it in 5th most of the time to keep the engine in the ideal powerband. With driving conservatively (staying 70mph) on the freeway for a trip of about 80 miles I observed around 35 MPG, this is fantastic for a sedan in this segment. Audi has been a front runner in helping the luxury market accept smaller, turbo charged, engines. Many competitors such as BMW, Cadillac, and Mercedes are looking to give up the V6 in most of their sedans and switch back to smaller displacement and forced induction.

The A4 was equipped with basic tech goodies such as the USB capability for iPod and Satellite Radio. The signal from the Satellite Radio was one of the worst in any vehicle I’ve ever driven and would occasionally cut out while out in the open, nowhere near buildings or tunnels. This may have simply been a rare antenna issue. All other systems worked fine and I still commend Audi for the layout of the steering wheel controls, I think they are not only the best in the segment, but may be my favorite out of most manufacturers. Overall the Audi A4 offers a package that has the basic needs of luxury including, swift initial acceleration, great interior quality, and a very standout look. It also offers fuel efficiency that anyone can appreciate and that would make it a very comfortable commuter for someone who wants to make a statement but also save some money. However, If you’re looking for a turbo charged sports car to get your blood pumping… you may want to look at the S4 or other models in the line. This Red Baron may not be able to out run the competition, but it will out maneuver many and out gun most in the battle at the gas pump.