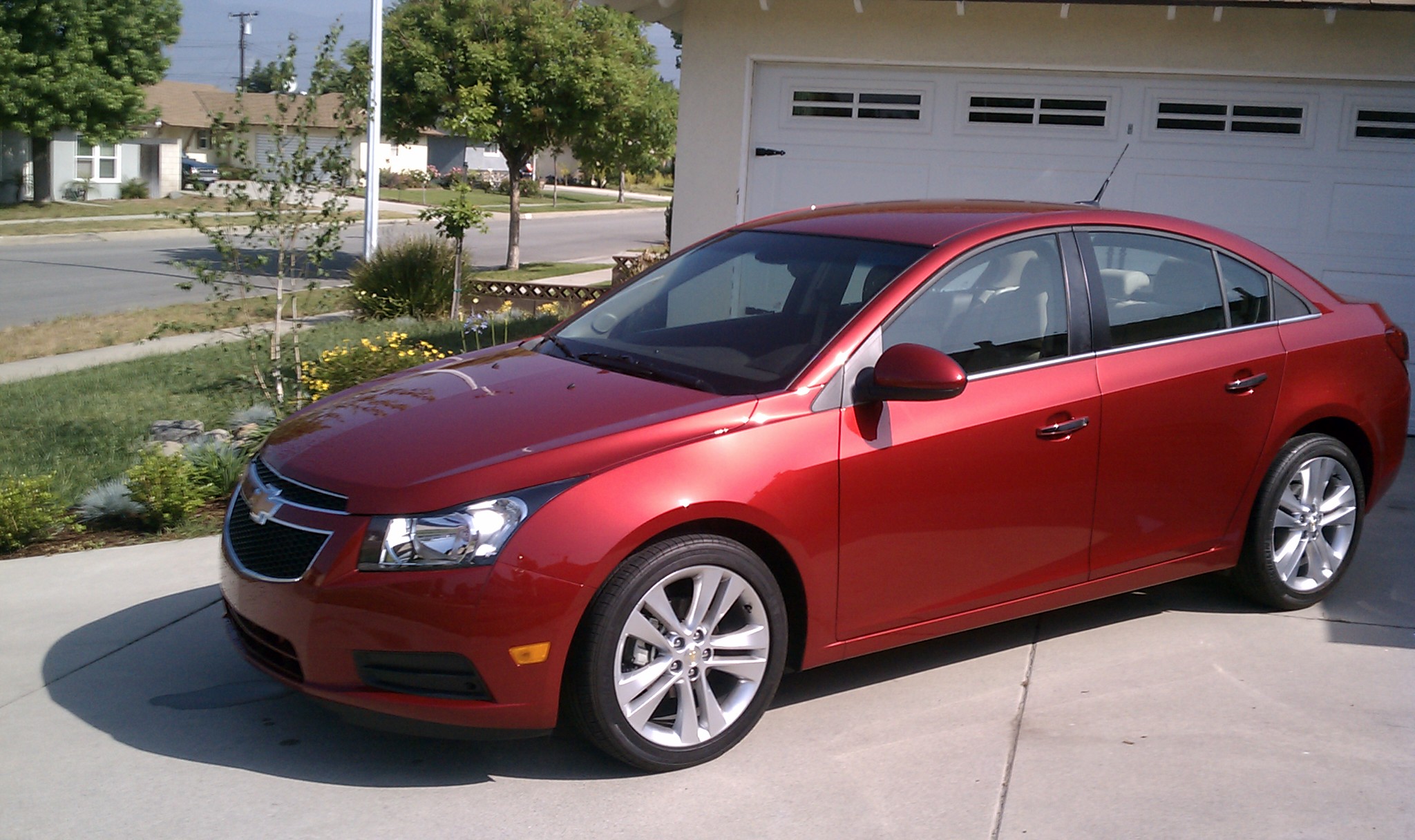 They say the third time is a charm, with Chevrolet and its current compact cars, we have gone through the Cavalier, Cobalt, and now we have the new Chevrolet Cruze. As gas rolls back into the $4/gallon range, this may be one of the most important launches the company has had in recent years save for that of the Chevrolet Volt. The Cruze has the best chance to win in the current marketplace. The Corolla has taken a sales hit from quality issues and the Honda Civic has gone the way of Myspace as the market has progressed forward. On paper the new Cruze can jump out with phrases such as “36mpg” with “interior refinement” and a staring price around $16k. So we shall see if the marketing and hype can keep up with reality and see if Chevrolet has finally got a compact to compete with the Japanese, and also the new heavy hitters from Korea.

The Cruze we tested was the LTZ trim level and featured a Crystal Red Metallic exterior paint and Cocoa and Light Neutral Leather. The car was equipped with the standard radio featuring USB, AUX Input, XM Radio, and OnStar Navigation. The overall cabin was pleasing and is similar to what you would expect to see in cars at a much higher price point than the $23,500 price tag on our vehicle. The main issue we found was that the seats grew to be uncomfortable after about a half hour of driving. We went on a 2 hour drive to Palm Desert in the Cruze and thought it would be okay to put three adults in the rear seats; it wasn’t. The rear seats are made for 2 adults for short periods and never three for any amount of time unless you want to lose friendships. This is expected in most compact vehicles and wasn’t as disappointing as the overall comfort of the driver and front passenger seats. I will note that I recently drove the new Hyundai Elantra at a test drive event and the seats were even worse… similar to a park bench covered in cloth. 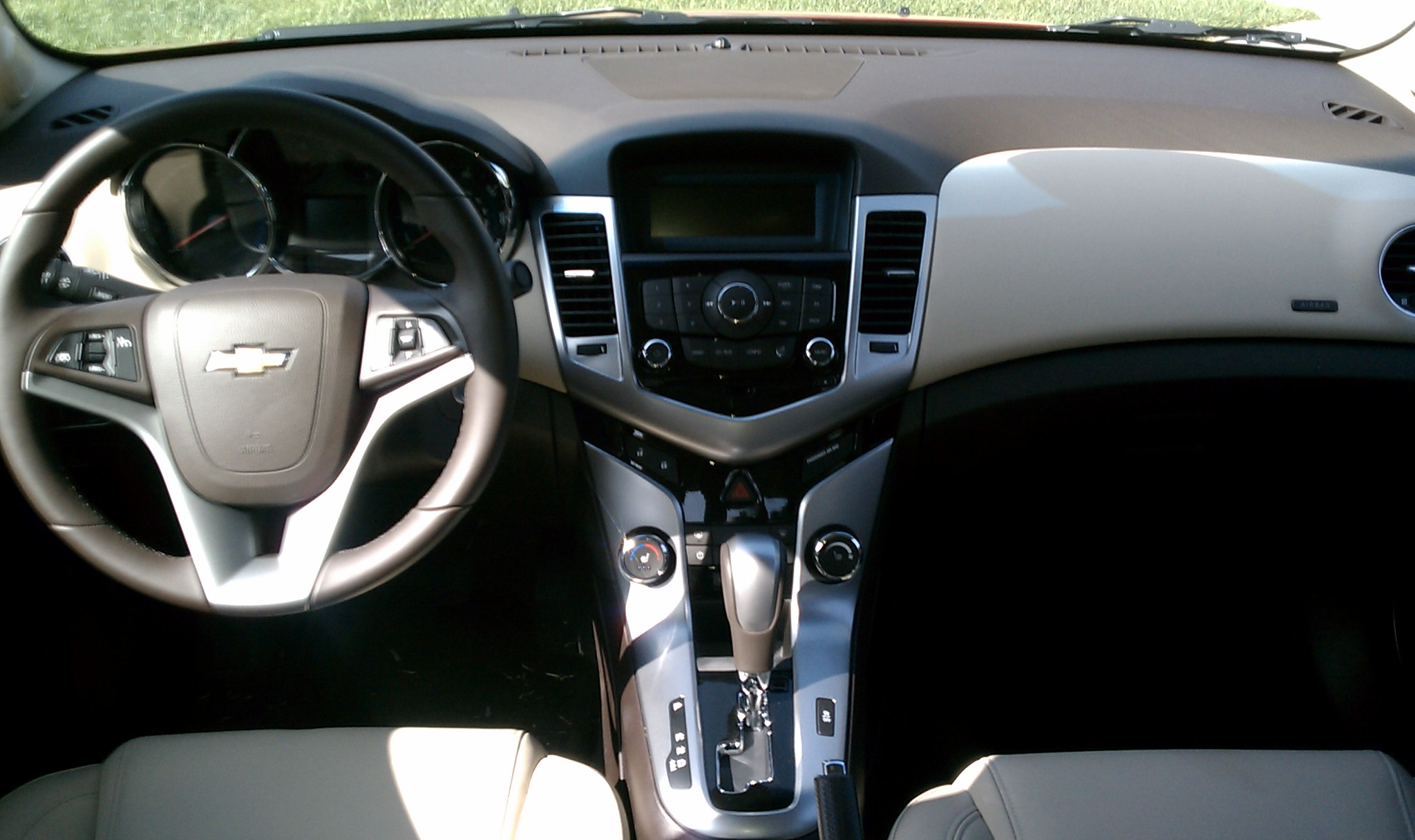 The Chevrolet Cruze was equipped with the turbocharged 1.4l 4-cylinder engine and the 6 speed automatic transmission. When driving normally and in no hurry this car does a fairly adequate job at moving about town. The engine cruises on the highway at 75mph with little noise overall when compared to most cars in this segment. The main issues I found with the driving experience was that you can tell everything was sacrificed for sake of the gas mileage. While most people buying this car will do so solely for the nearly 40mpg and affordability, the lack of power will turn many away. The engine is rated at 138hp and the car itself weighs in at just over 3,000lbs. When all that is equated, you get a 0-60mph time in the 9-10 second range. This resulted in a dismal 28mpg average when driving about a 80/20 percent highway/city mix in the week time I had the car. The problem is that the engine has to work so hard to accelerate up any sort of grade and to get up to highway speed (75mph in my case). I have no doubt that the EPA estimated 36mpg can be achieved, but it would need to be a flat area and you would not be able to go much beyond 70mph. Cars like the new Ford Focus do a much better job at giving you the gas mileage in the 40s and still maintaining the ability to accelerate and keep the driving experience somewhat pleasant.

The Cobalt was miles ahead of the outgoing Cavalier when introduced in 2004, and this new Chevrolet Cruze is also miles ahead of the outgoing Cobalt in most cases. The unfortunate thing is that the Cruze is still behind many of its competitors and that is the issue that really matters. The new Ford Focus is simply a better car in every aspect except maybe dash layout. I am in no way saying that the Cruze is a terrible choice or that it would be terrible to live with everyday. But I believe you should drive other cars like the new Civic, Focus, Elantra, and Corolla before ultimately deciding which suits you best. I prefer the exterior styling of the Cruze to all those mentioned above and think it can sell on its initial interior and exterior design alone. I just wish the powertrain wasn’t so breathless and that the seats were slightly more comfortable. The biggest thing I’ve found when experiencing this car and many of it’s closest competitors is that anyone in the market for a new compact car cannot really go wrong with most choices available. Any of the cars mentioned can have their perks or downfalls, but the segment as a whole has made huge steps in the right direction.