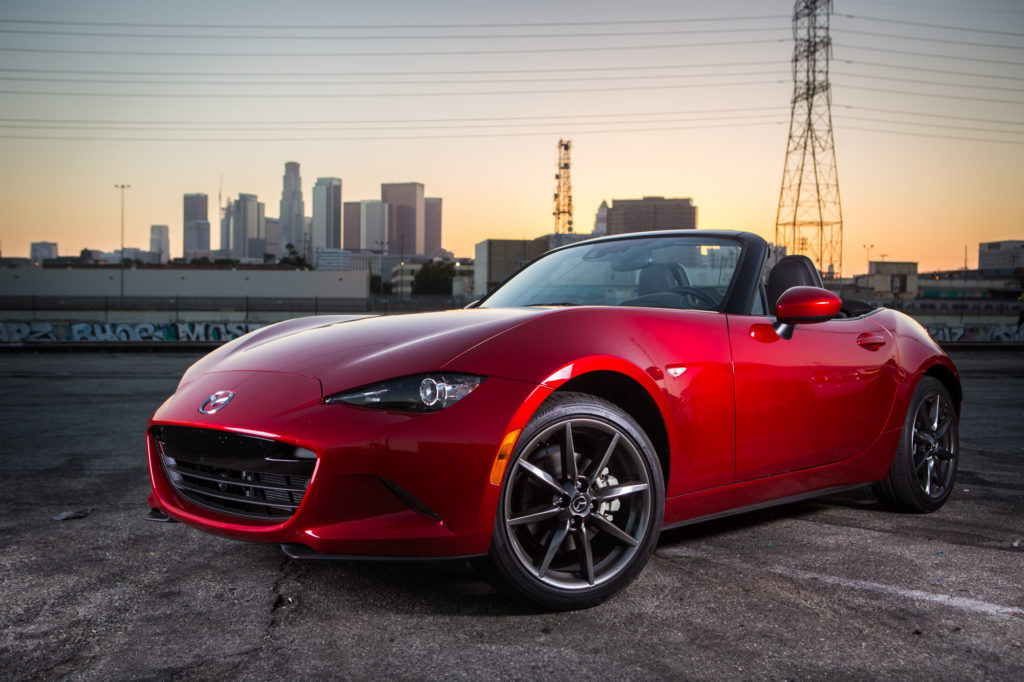 Traffic – it is the sad reality of living in Los Angeles and one of the most commonly used phrases to describe the city. Things are so serious that I have had friends in LA who have ended relationships because the commute to their significant other was too miserable. But the secret to Southern California that we don’t often tell visitors is that when the sun sets and the roads begin to clear — you find a driver’s urban paradise. The Mazda MX-5 has a similar secret as the general public has underestimated the “adorable” Miata of the past as simply another cute 2-seater. Meanwhile, automotive enthusiasts have known of the driving prowess of the car since its inception and this new 2016 model aims to continue that legacy. We waited for the city to sleep and took the new “who you calling cute” MX-5 on a night out on the town. 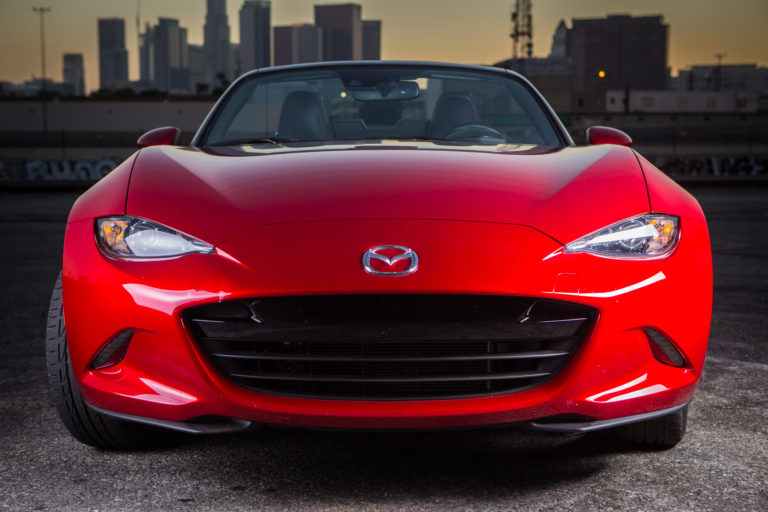 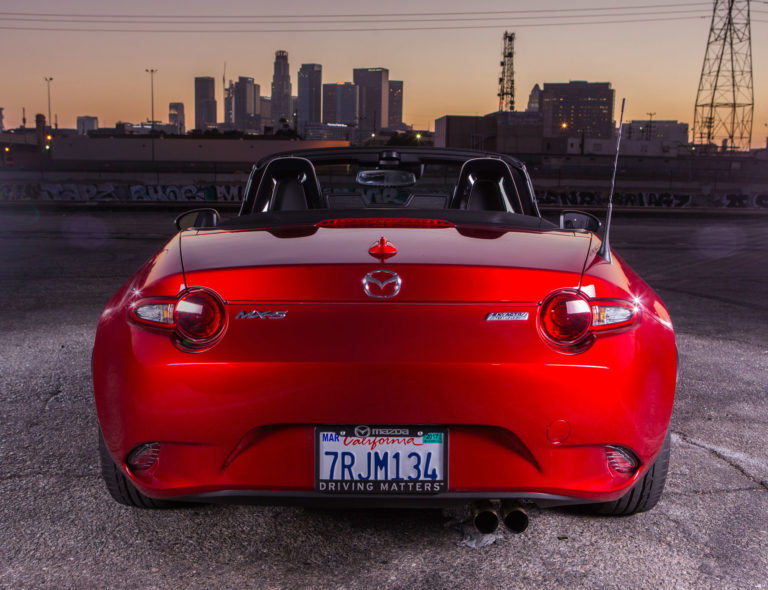 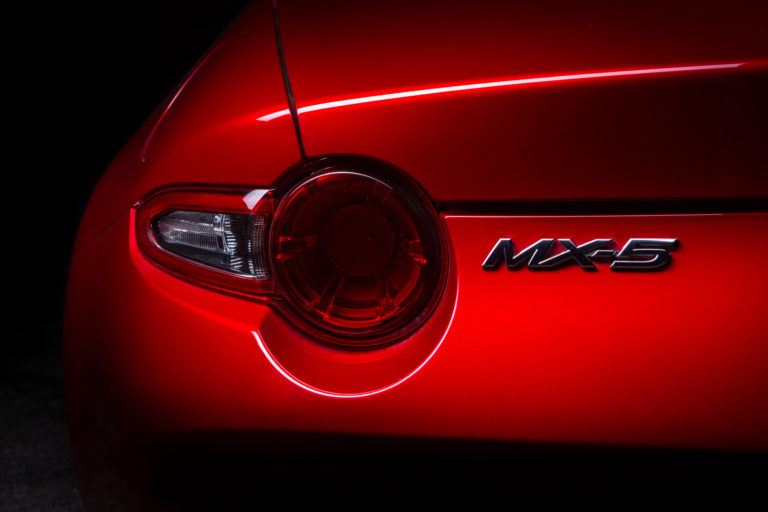 Climb into the driver’s seat of this new MX-5 and the car surrounds you like a cockpit. The cabin is small but doesn’t feel overly cramped even for passengers just over 6 feet tall. Everything from the steering wheel, the clutch, to the shifter is laid out with driving efficiency in mind. Materials like the leather seats and stitching on the door panels inside this Grand Touring model were quality — but not mistaken for anything too luxurious. This Miata is made for the purpose of driving and it certainly knows its role. The MAZDA CONNECT™ infotainment system will get the job done but the user interface looked to be sketched up on a napkin during lunch. To keep you connected to your media the MX-5 includes bluetooth audio, two USB ports, an AUX input, and MicroSD and SD card slots. There is also a 12V charging port mounted down in the passenger footwell (yes, the footwell) for those that want to charge their devices on the go.

The goal of the MX-5 is less weight and the convertible top is a manual affair. Thankfully the system is designed to be one-handed and with a quick release of the interior latch you can quickly snap the roof down behind you in a matter of seconds. Wind noise with the top down is minimal at higher speeds and the audio for a bluetooth call comes out of the Bose speakers built into the driver’s seat. This system works surprisingly well and you can have a clear conversation while taking in the open air. This advanced Bose system combined with Bose AudioPilot® 2 noise compensation technology will even adjust EQ and sound quality automatically depending on roof position, wind noise and road noise. 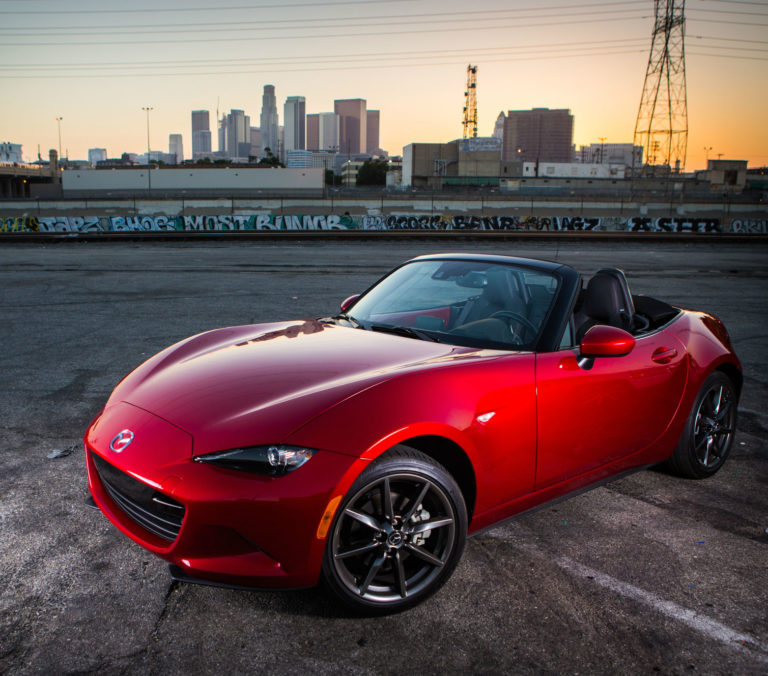 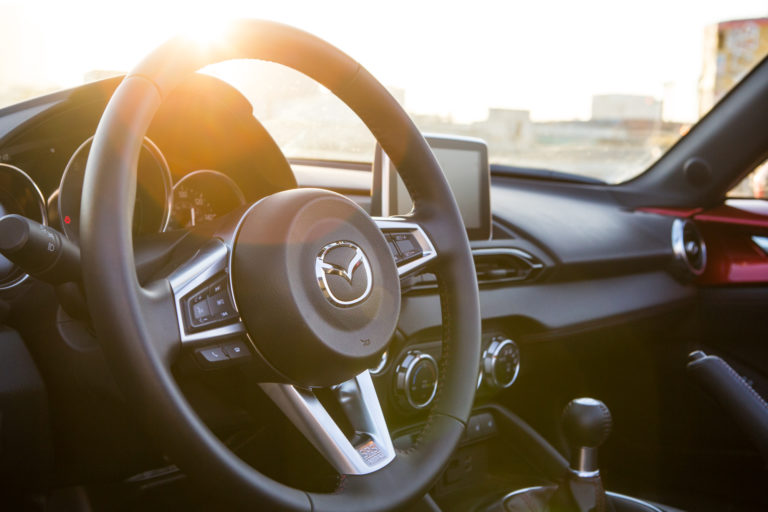 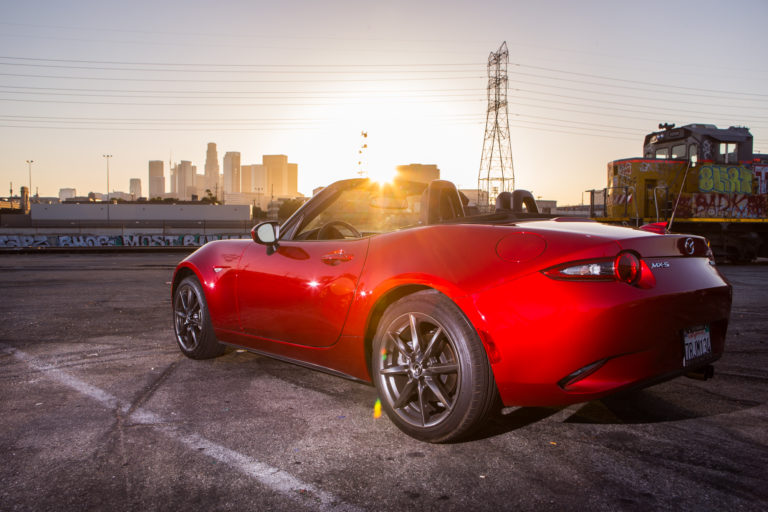 The Arroyo Seco Parkway portion of the 110 freeway was built in 1940 and with its 45MPH speed limit, shortened the Pasadena to LA drive from 27 to 12 minutes. Today it is one of the more dangerous portions of freeway in the state as cars travel at modern freeway speeds up the narrow and winding road. Therefore, it was the perfect place to let the top down and take in a night drive. The 2016 Miata’s normally aspirated 4-cylinder produces 155hp and 148 lbs-ft of torque. While a Toyota Camry has more power than this measly 2.0L motor, the MX-5 weighs in at only 2,300 pounds. With a perfect 50/50 weight distribution the MX-5 is an absolute blast behind the wheel. The clutch and steering are dead-on and feel mechanical and connected. You know exactly what the car is doing and it listens to every input from the driver. The MX-5 is precise with only a bit of body roll at higher speeds in sweeping corners. In tight turns at lower speeds the amount of grip is stunning and the rear of the car gives in to slight oversteer when directed to do so by the driver. The engine noise is nothing to write home about but the little Mazda revs freely as we rowed through the gears and ran free on the empty freeway at night. This car is what true driving enthusiasts dream of and will change your perception of what a car should be.

I have never experienced such an uncontrollable urge to drive a test car as I did with this 2016 MX-5. Every moment I had free in my week with the car I would go out for a drive. It didn’t matter where I was going — only the drive mattered. While the Grand Touring model that we had was around $31k, the base model – that you actually want – is around $25k. For that price the Miata offers little practicality but makes up for it in driving enjoyment. The biggest testament to the charm of this little car is the hint of sadness I felt when switching to a Charger Hellcat the following week. Sure the Hellcat has 707Hp, but that power is usable less than 10% of your actual drive unless you want to die or end up in jail. With the MX-5 you can use 100% of the car’s potential 100% of the time. Well… 100% of the hours between 9pm and 4am when there isn’t traffic. 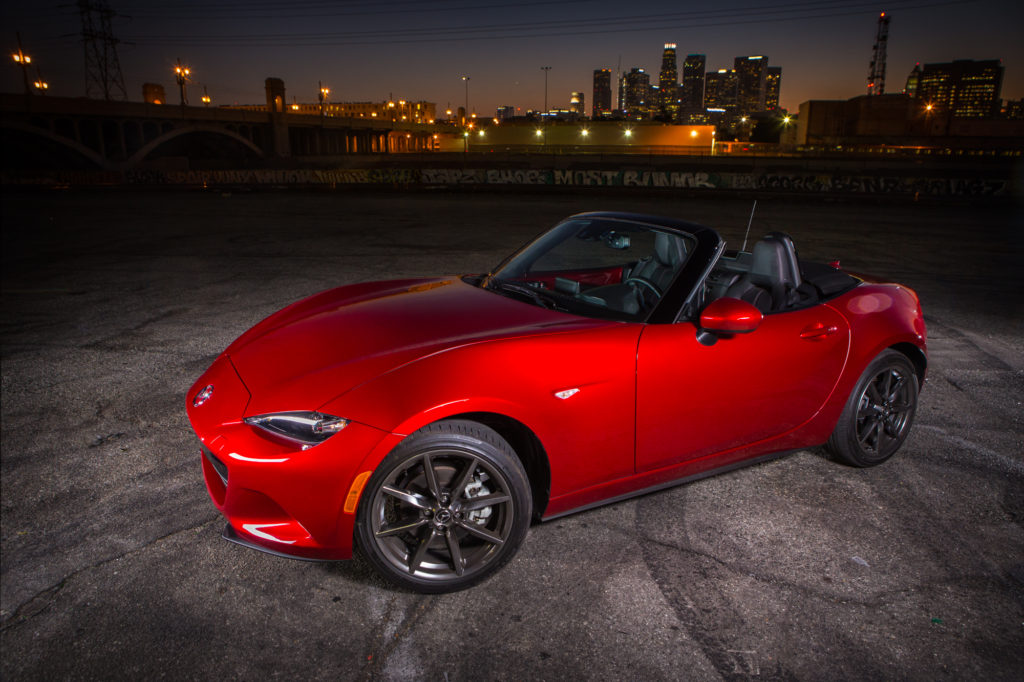