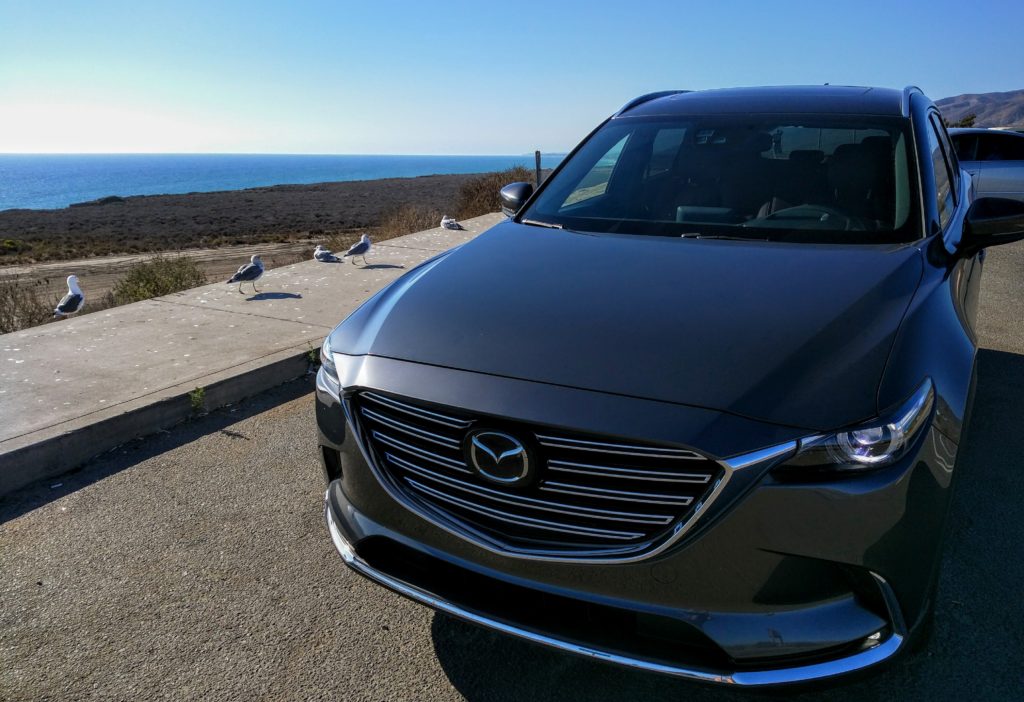 We have driven some truly wonderful cars this year and anyone shopping for a new car in 2016 would be hard-pressed to find a true loser. The latest Kia Sportage was fun and affordable although it lacked some refinement in the interior. The second generation Audi Q7 was luxurious but sadly didn’t improve enough to stay ahead of the competition. Even the rather good Chevrolet Volt failed to capture our utmost admiration. Ultimately, to be considered as our “Vehicle Of The Year” a car has to truly stand out for its impact on the segment, value for money, and superior driving characteristics. For this year’s winner, we take the whole family along and climb into the newest Mazda CX-9 to see how “sporty” and “7-passenger” come together. 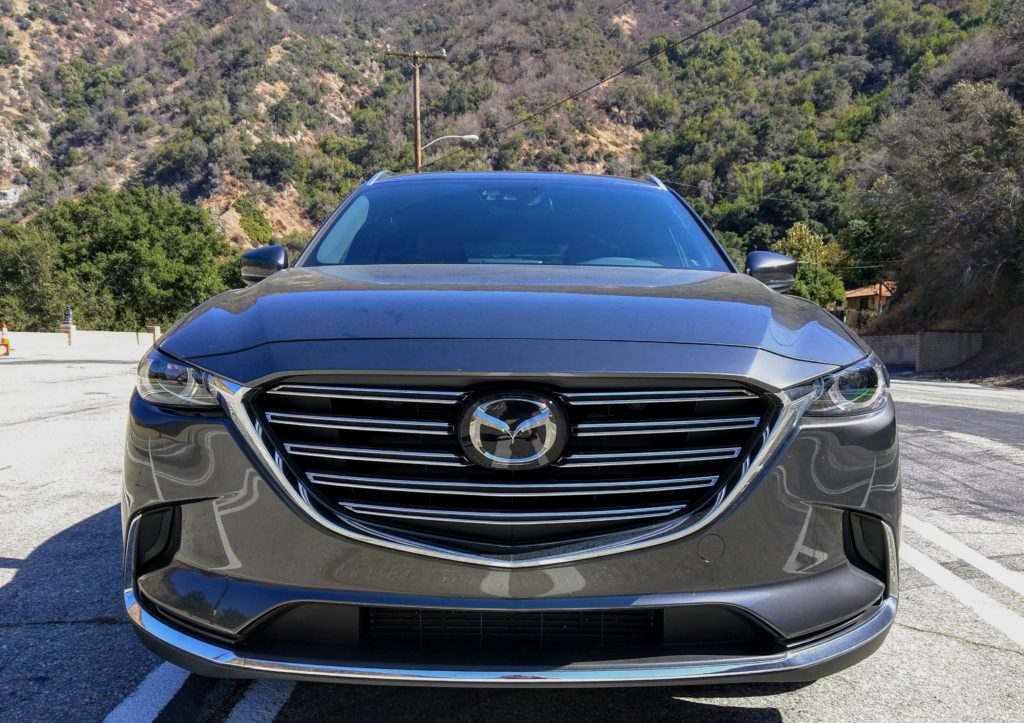 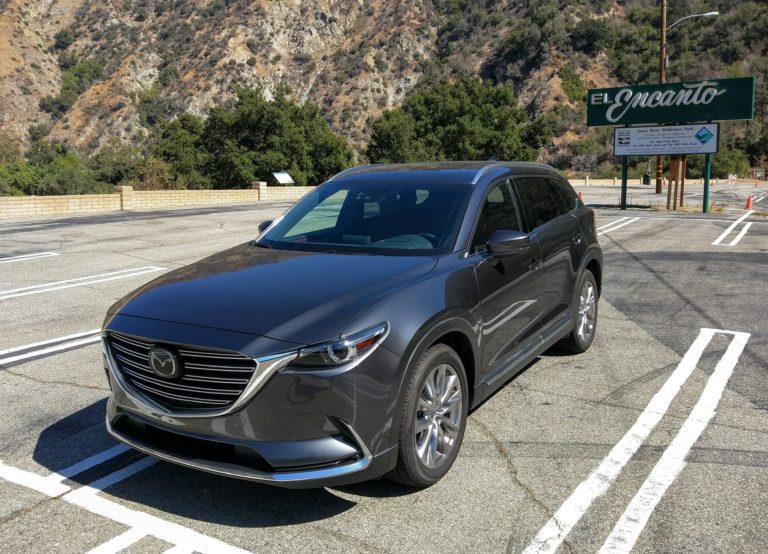 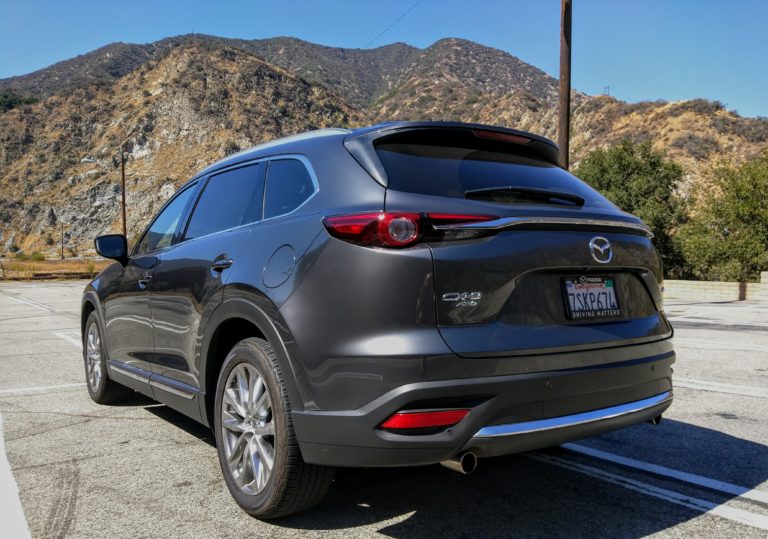 The original Mazda CX-9 that debuted in 2006 was rather bulbous and looked like a minivan struggling through puberty. The interior was also void of character but the CX-9 drove well and behind the wheel, it was one of the most pleasant SUVs in the market. The automotive media loved the CX-9 but the general market never seemed to warm up to the idea of a sporty 7-seater and it sat at the bottom of the Midsize SUV market with the likes of the Ford Flex. A decade later the Mazda brand has a new styling language and hopes that this latest CX-9 will finally strike a chord with families looking for more fun and less cost to their crossover.

With this new 2016 Mazda CX-9 the design is curvy and modern in a way that grows on you over time. When first approaching, the large front grille can come across as awkward and protrudes over the front bumper to look like somewhat of a large nose. But further inspection reveals design details like the chrome grill blending into the front headlight and forming portions of the LED lights within the lens. The circular LED light theme extends to the rear taillights and the chrome strip across the tailgate give a premium feel. Unlike the drastic modern designs from brands like Lexus – which we personally love – it seems like this Mazda design is less offensive to the modern buyer. Everyone who happened to see the CX-9 while it was in our possession had positive remarks such as “Oh wow! That’s a Mazda?” Driving around Los Angeles the CX-9 certainly received more looks than the design of the latest Audi Q7 – a car nearly twice the price. Interestingly enough, Audi’s teaser for the upcoming Q8 looks more aggressive and slightly reminiscent of the CX-9. 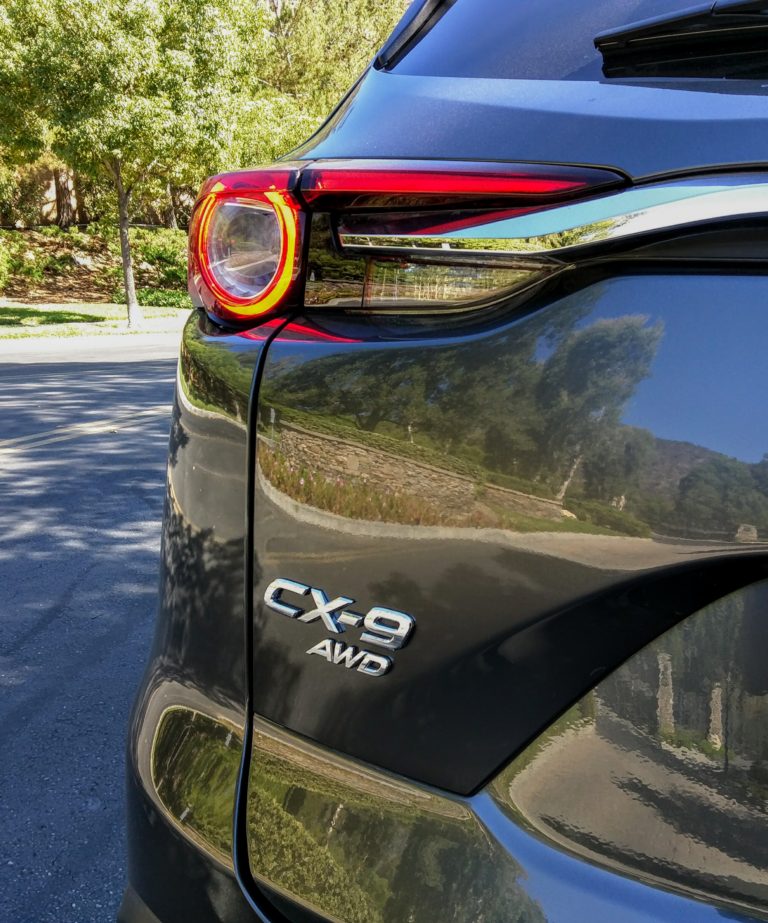 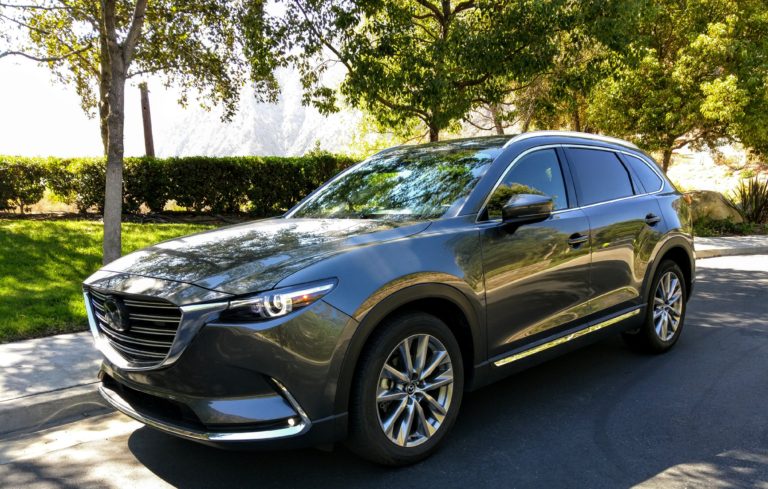 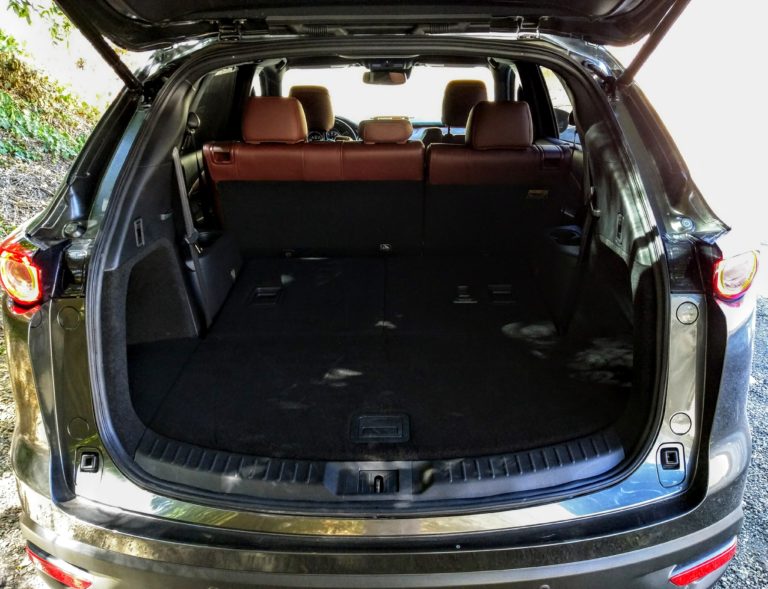 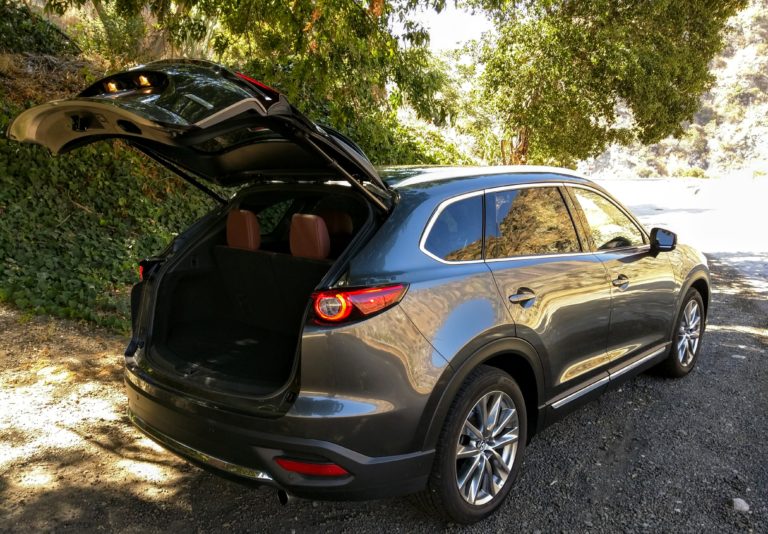 One of the biggest improvements on this latest model from the outgoing CX-9 lies on the inside. Mazda even released a commercial to show a craftsman hand carving wood trim for the center console to emphasize the new direction for this 2016 model. While the interior leather stitching and wood won’t be mistaken as actually hand-crafted materials, the interior is modern and handsome. Every common touch area for the driver and passengers feels of quality and is a far cry from the dark plastics Mazda was known for in the past. Our Signature model comes standard with the Auburn Nappa Leather interior and deep red draped the dash, door panels, and seats. The seats were very comfortable for each passenger and you could even have adults in the third-row area for short trips if needed. There are still a few spots within the interior that you can note some cost cutting, but overall the experience is better than most full-size SUVs in this $46k price range. The rather ancient media system interface remains to be our only major criticism for the latest Mazda line and an update in the future, to support Android Auto or Apple Car Play, can’t come soon enough.

When a company makes Driving Matters its motto, you have to expect a drive that exhilarates you even in a 7-passenger SUV. The new CX-9 defies physics with the way you can use its agile handling to cut through the local commute. The SKYACTIV®-G 2.5L turbo motor may only produce 250 horsepower but the CX-9 has 310 lb-ft of torque at 2,000 RPM and really dashes off the line. The 6-speed automatic transmission is quick to run up and down the gears and makes great use of the low-end torque from the motor. The CX-9 even has a Sport mode that keeps you in the higher rev range and transforms this large kid-hauler into a surprisingly good ass-hauler. Even with the AWD system on our test model, the Mazda CX-9 returned a respectable 24MPG over the entire week. The official rating is 21MPG city and 27MPG highway and that latter number seems attainable as we hit closer to 26MPG driving around 70-75MPH on a long highway trip down to the San Diego area. 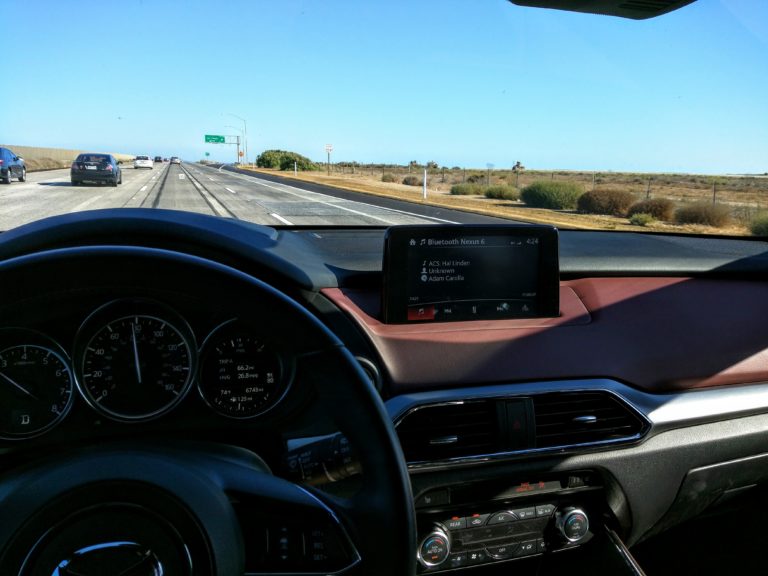 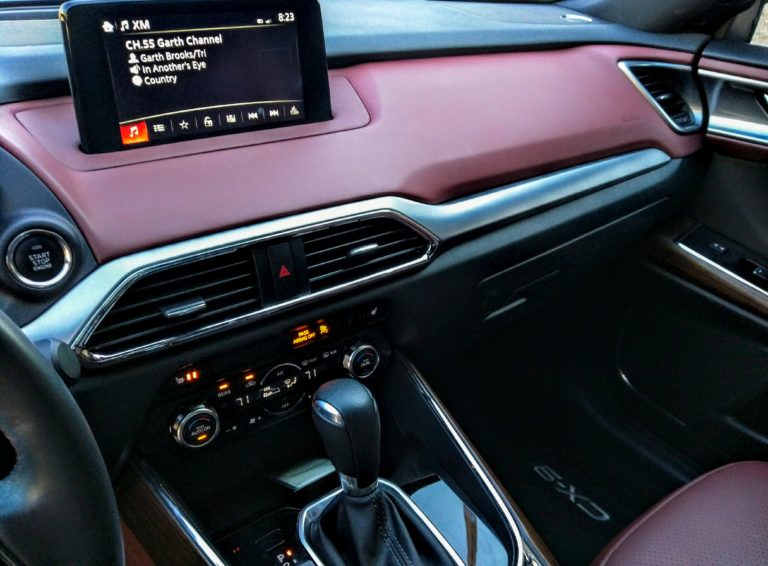 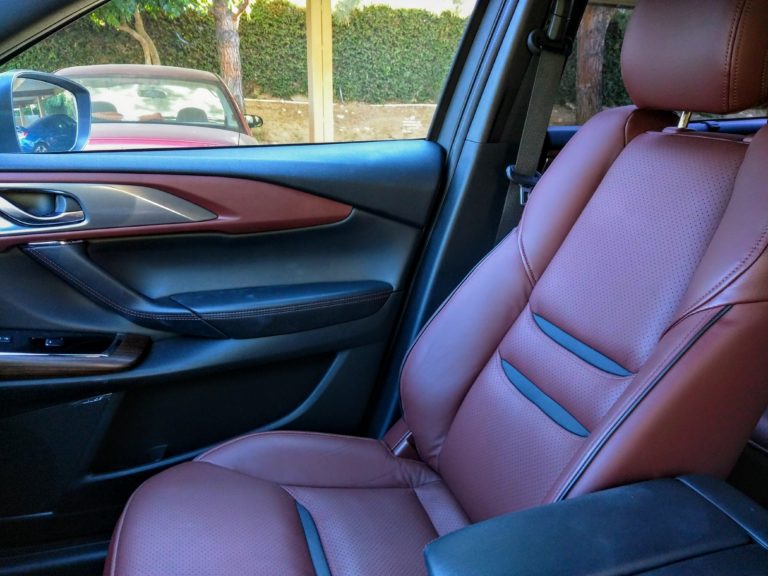 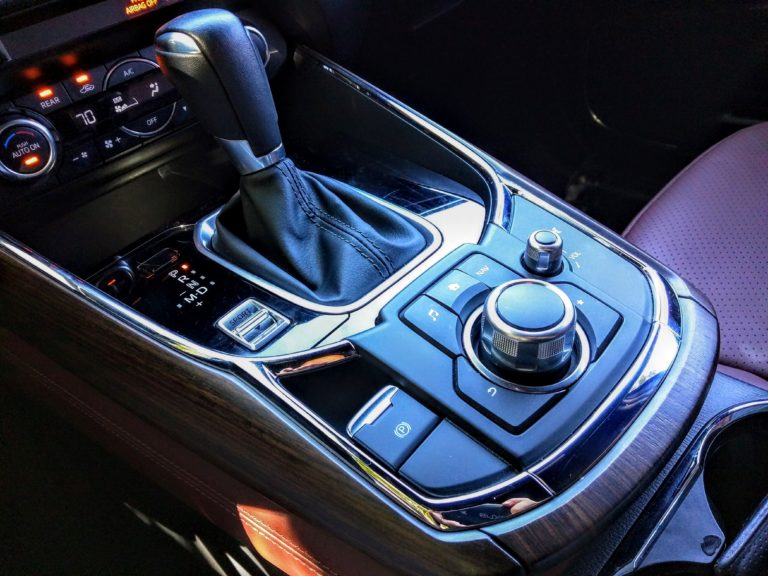 We have been blown away by the latest products being produced by the Mazda brand. The Mazda MX-5 was simply fantastic and voted our “most difficult car to give back the keys” in 2016. 2015 may have marked the renaissance of the Volvo brand and vehicles like their new XC90 stole our hearts – even though they left us in the sand. But for 2016 we declare it the “Year of the Mazda” and hope to see continued improvements in the future. The 2016 CX-9 is an easy recommendation for anyone in the market for a large SUV and stay tuned for our review of the latest 2017 Mazda CX-3 in the new year to see if Mazda can keep the streak alive.