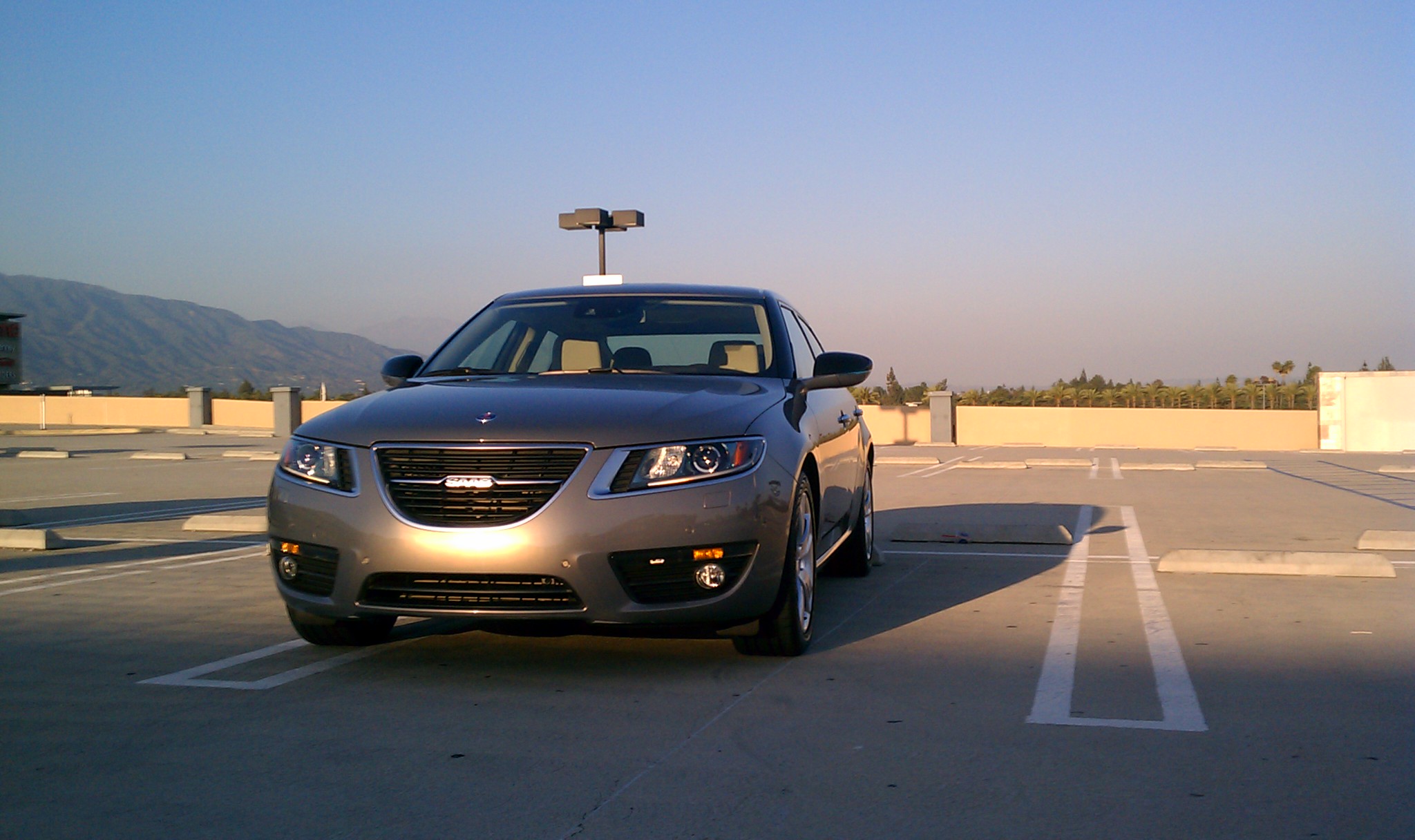 It’s hard to even know where to start on this particular article. The state of the Saab brand is progressively getting worse day after day since we took the keys of the all new 2011 Saab 9-5. The company had been given little attention by GM during its ownership and then had seemed to find some gleam of hope from auto maker Spyker in 2010 when they had assumed ownership. Then earlier this year Saab had ran out of money and Spkyer has struggled since to find financial support from Sweden and several companies in China. The most recent news is that many of the suppliers for the company have moved to force Saab into bankruptcy to resolve their debt issues. Saab workers are worried about receiving paychecks and dealers are ordering vehicles like this new 9-5 and the all new 9-4x in quantities that you can count on your hand. It seems that the company that was “Born from Jets” is no longer soaring and it looking like only a miracle akin to walking on water will would keep the company around to see any additional new models. The new 9-5 has the looks to be a contender… but is it enough? 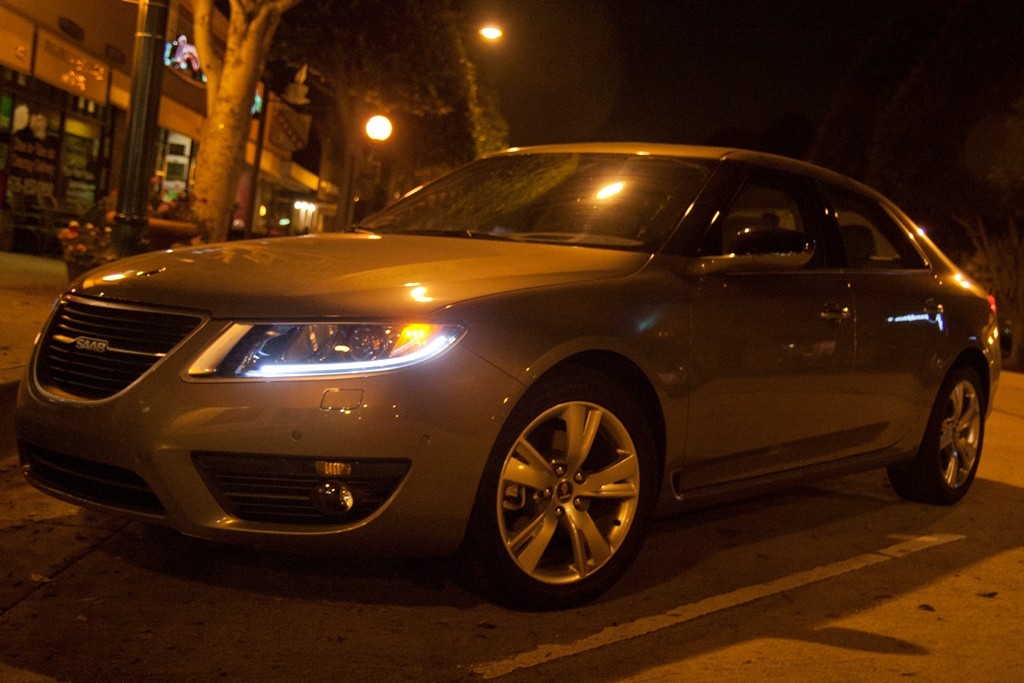 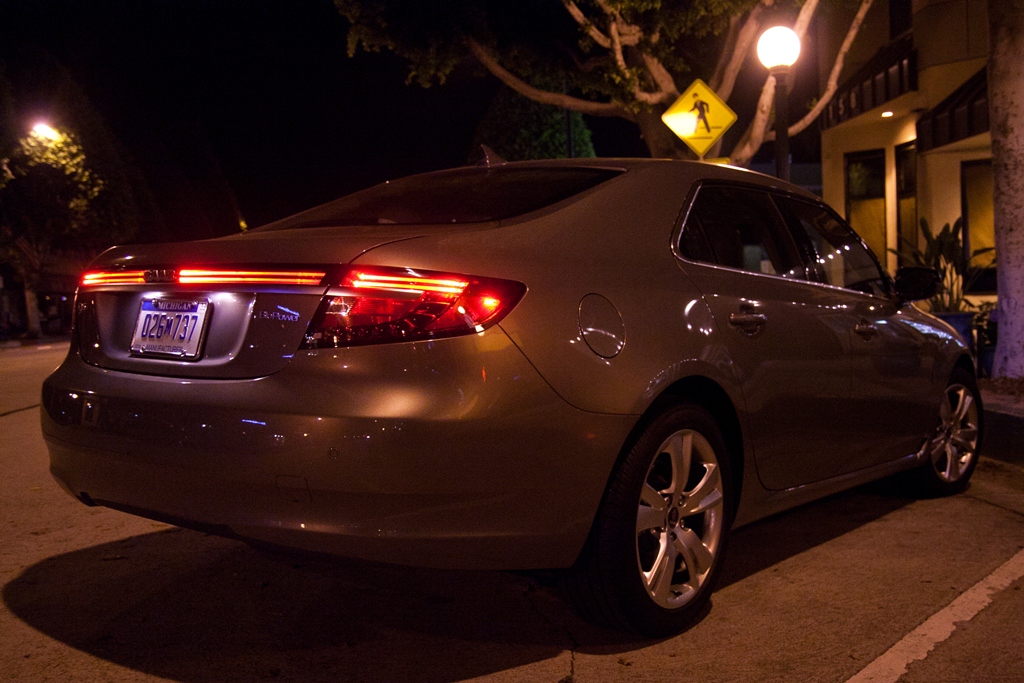 The new Saab 9-5 was developed while mostly under GM ownership and the actual platform underneath is shared with the newer Buick Lacrosse which we had tested last year. The Saab felt similar to the Lacrosse in ride comfort but the chassis felt a lot more stiff and made the 9-5 drive fairly sporty for a large Front Wheel Drive vehicle that should do anything but handle well. The standard model in which we tested was equipped with the turbocharged 2.0l 4 cylinder engine which produces 220 horsepower and 258 lbs of magical torque. The 4 cylinder is marketed by Saab as BioPower due to its ability to use ethanol gasoline and has rear badging proclaiming this nearly irrelevant feature. The power was smooth and the 6 speed automatic was refined and helped the engine to be used when most efficient for power and fuel economy on the highway. The EPA estimated fuel economy with the automatic is 17 city and 27 mpg highway. We observed around 23mpg average with a mix of mostly highway driving and the estimates could easily be achieved with a less aggressive right foot. The Saab is not the fastest luxury sedan around with the cylinder motor and takes nearly 8 seconds to reach 60 mph, and yet the local police seemed to love the car. I was pulled over twice while in the Saab 9-5… more than any other vehicle that I have even owned personally. I believe much of this attention was due to the unique exterior styling of the car (at least that’s my story and I’m sticking to it). 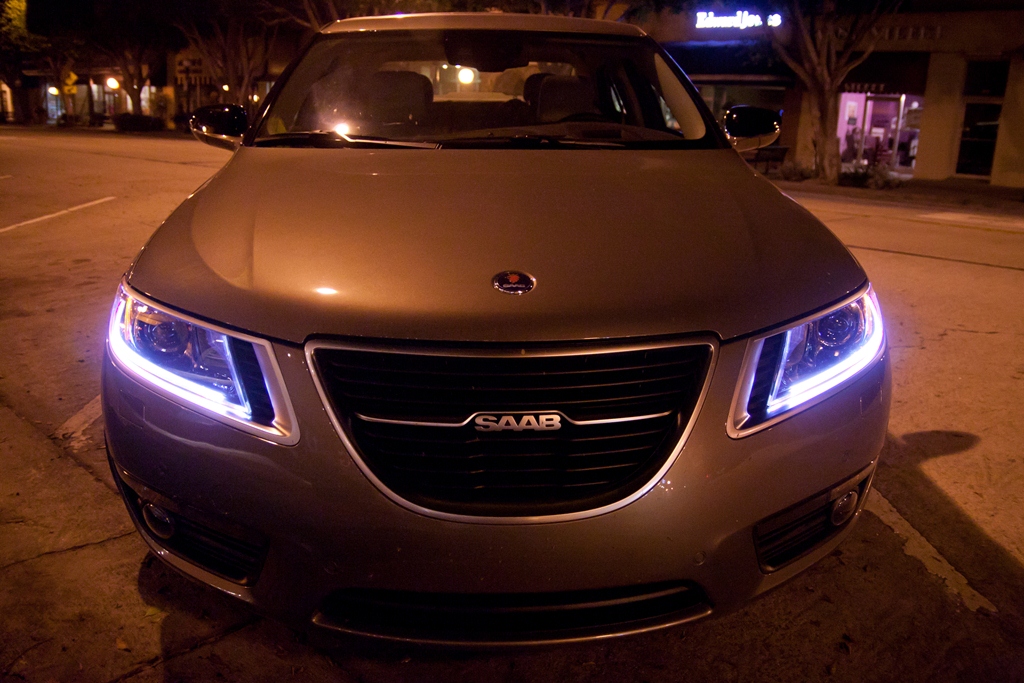 The new 9-5 was a car that I never expected to get so much attention on the road. Most drivers will rarely be able to distinguish a Saab on the road and many may not even know what in the world a Saab is. The 9-5 however is one of the sleekest and plainly handsome cars that Saab has ever built and simply shined in the Oak Metallic paint. It is based off of some of the design cues that went into concepts like the Saab Aero concept of 2007. The exterior features a distinct use of LED lights on the front and rear. The rear end may be one of the more distinguishing things on the highway and you could see many people point stare as you drove by. The curved rear end leads up to a very sleek c-pillar that starts to make the 9-5 stand out. Up front the nose looks sophisticated and strong, just enough older Saab styling to be distinguishable and great new lines that make the car look very modern. This very “Saab-like” look and feel continued into the interior of the car as well. 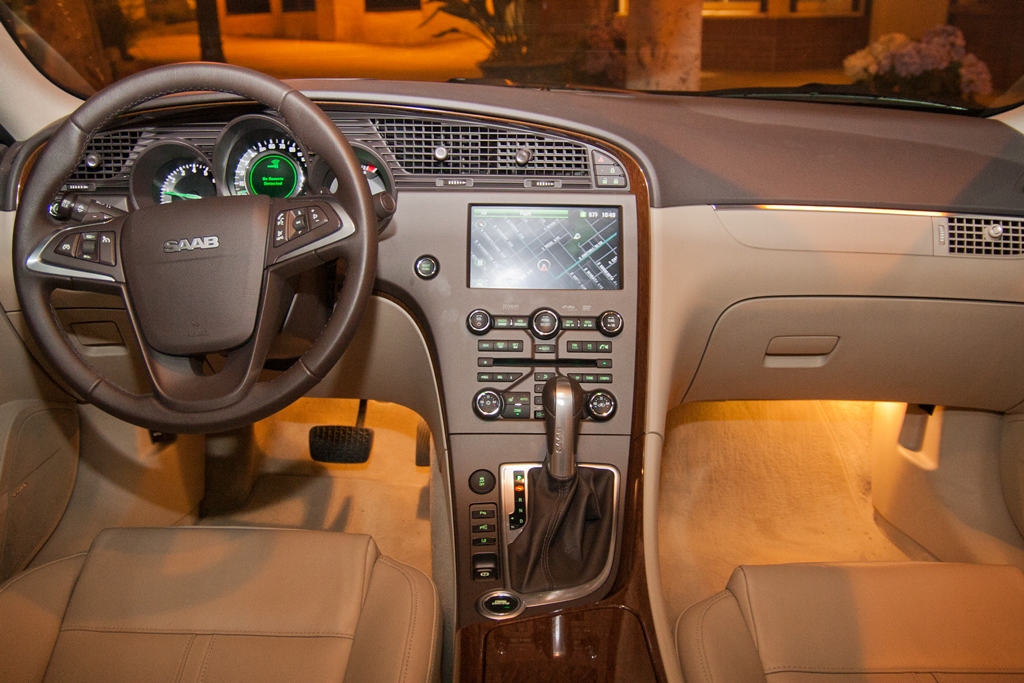 The interior of this new 9-5 featured a nice tan leather with brown and sand colored accents. Some of the elements were obviously borrowed from the GM parts bin including the steering wheel and the Navigation and Audio interface. The rest or the layout was distinguished enough to be recognized as a Saab and had a quality feel in terms of fit and finish. The Saab had a very unique gauge readout that allowed for a choice to view the speedometer as if you were in a fighter jet and a “Night Mode” for the dash lights which blacked out everything except the needle and numbers on the speedometer. To me it was these small elements that made the car quirky enough to be unforgettable and made for a nice conversation piece for any passengers entering the car. I’d imagine the complete nerdiness of that last statement will also be shared by the chosen few who purchase this vehicle. The quirky factor of this car did not stop at simple tricks like the gauge cluster magic. This car became known to us during the week as the “nanny car” for the various warnings and functions that would yell at you while driving. The Saab 9-5 was equipped with a lane departure warning system, blind spot monitors on the mirrors, and a setting that would notify you if you had reached a “high speed” such as 80mph. All this translated into mostly frustration over helpfulness and I would have turned it off if time and my patience would have allowed for it. The seating room was great overall and the rear legroom was much larger than many competitors in this segment like the BMW 5 series and Mercedes E Class. The Saab is also slightly cheaper than many cars its size with a price tag around $45k with the options we had on our tester. 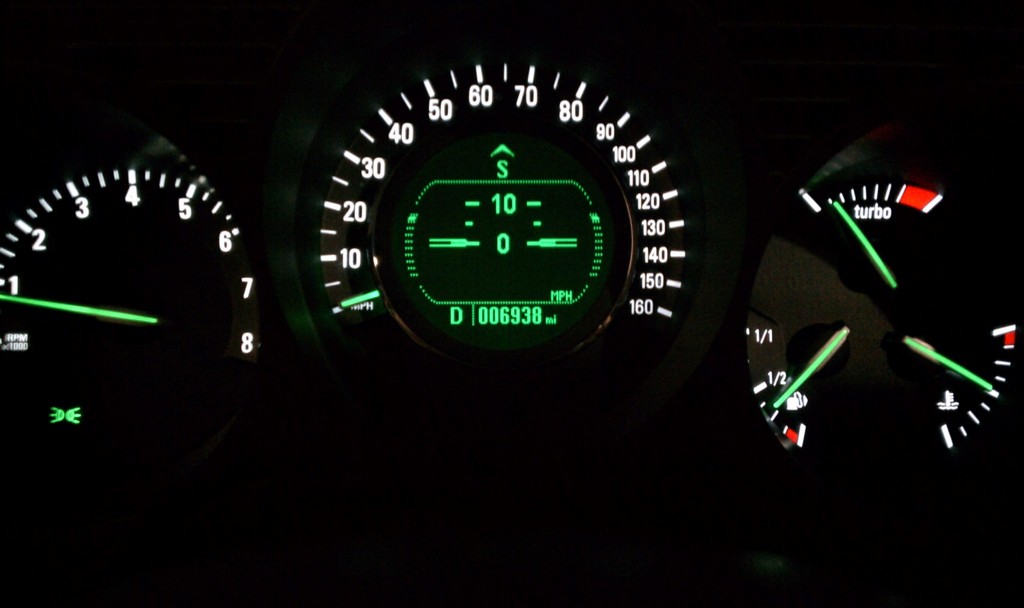 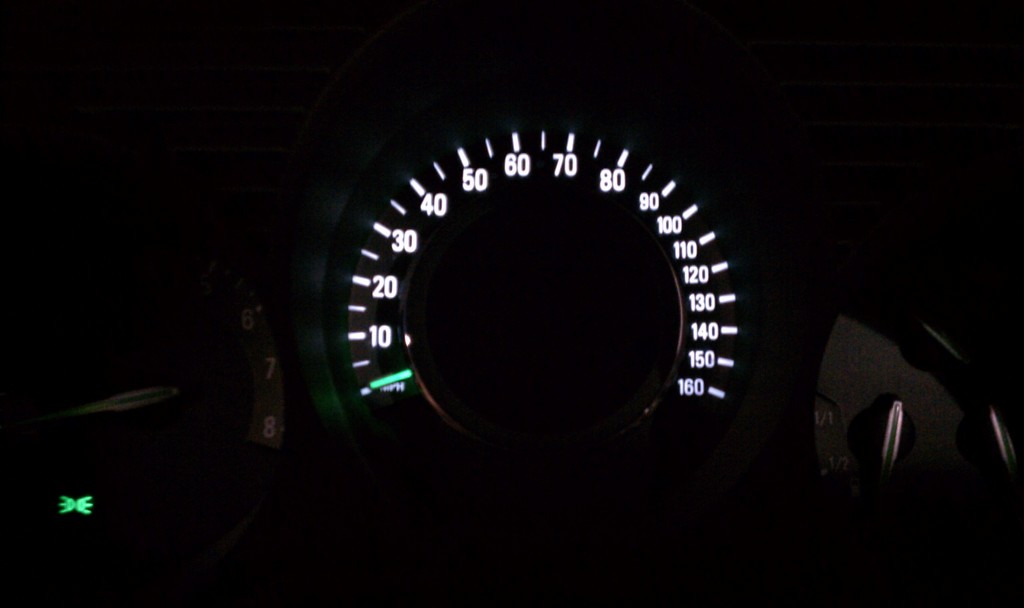 The most recent news today is that Saab has finally been forced to file bankruptcy to protect itself from the creditors that have been closing in in recent months. This is supposed to give the company enough time to restructure itself and help make the deals it needs to with Chinese firms Pang Da and Youngman. The story so far in the market for this Saab 9-5 is no fairy tale as the sales each month are hoping just to break into the hundreds. In my week in the new Saab I was pleasantly surprised by how much I enjoyed its comfortable ride and quirky styling elements. The real downfall of the car and the brand itself is that there are just so many cars competing in this segment and the little things that make the Saab 9-5 stand out just aren’t enough. The Saab is truly a good car and anyone in the market that wants to stand out of the sea of Audi and BMWs on the highway should have no fear looking to the 9-5 to fill that void. It is just a real shame that that sea of sedans from Germany may pull the whole company under and we could lose another automotive icon.

Photos of the Saab 9-5 provided by Jim Donnelley