We may be used to reviewing brand new cars here but the truth is that most of us fly past the 5k-10k mileage mark sooner than we like and things begin to deteriorate and change. As it is put through the rigmarole of life a car may go from a tight and well-tuned machine to the vehicular equivalent of the Abu Ghraib prison. I purchased a brand new 2012 Fiat 500 Sport in the Autumn of 2011 and have since driven 65,000 miles in the little red car and figured I would share my experience thus far. My biggest worry when first purchasing the car was the whisper of “Fix It Again Tony” from the past and I want to reassure potential customers that Tony may be out of work soon.

I am the type of sick auto enthusiast that sees owning an Italian car as a bit of challenge – man versus well-styled time bomb. Therefore, I expected some mechanical issues or the occasional trip to the shop to sort out some of the “quirks” that Gino may have not bothered to tie down at the factory. What I have experienced so far is a car nearly void of any shortcomings and my first – and only – trip to the dealer for repairs involved simply replacing the seat latch for passengers to get into the back seat. The rear hatch Fiat logo has succumbed to water damage after a bit of moisture leaked through, but the dealer was willing to replace that at no cost as well. Aside from those two items I have replaced the tires and brake pads once.

The Fiat 500 Sport was thankfully equipped with the Bose stereo option and continues to rock the little car far better than the Dre Beats nonsense that comes in the 2013+ 500 models. The Bluetooth system is sadly void of a Bluetooth audio streaming capability (easy $8 solution to fix this is a USB Bluetooth Audio Receiver with AUX output) but phone calls are clear and operating the system and menus is as basic and easy as it gets. I generally spend two hours a day behind the wheel as part of my commute and the steering wheel controls and overall multimedia system are rock solid and rarely give me errors. One bit of Italian charm is that the clock on some of the 12′ 500s will run slow and I find myself resetting it after a couple months once I am 10 minutes behind the time I originally set. The dealers were fixing this also but I decided to avoid having them rip the dash apart to install a new gauge cluster and live with it. I have also had the headlight bulbs go out on the car and since the bulbs are “unique” the dealer will try to charge you $80 but they can be found online for closer to $30.

So the 1.4L motor is not the most powerful beast to begin with but it certainly has enough poke to get you through most situations and at 60K miles it still purrs as it did with only 6 miles on the clock. My biggest fear with this car was the complexity of the MultiAir valve system and so far there hasn’t been so much as a hiccup that would cause concern. I installed the Mopar Cold Air Intake system for the car around 25k miles into ownership and was blown away by the sounds and performance increase. Nearly a year later, the rubber elbows connecting major parts of the intake deteriorated and completely cracked and the overall build quality of that aftermarket item was poor considering the $300+ price. The clutch has seen the worst traffic in the world and still works just fine with little to no grinding or change in pedal feel over new. The handling, insulation, and ride of the car surpass any of the other small cars I have driven in the market and the seats and suspension have kept the hours per week behind the wheel more than tolerable. Only within the last 10k miles has the steering began to feel a bit loose and I imagine I simply need to take it in for an alignment check as the tires I put on at 50k miles were larger and heavier than stock ( I saved a $100 or so avoiding the limited selection of tires at the stock size and went a bit taller/wider for a better ride.) 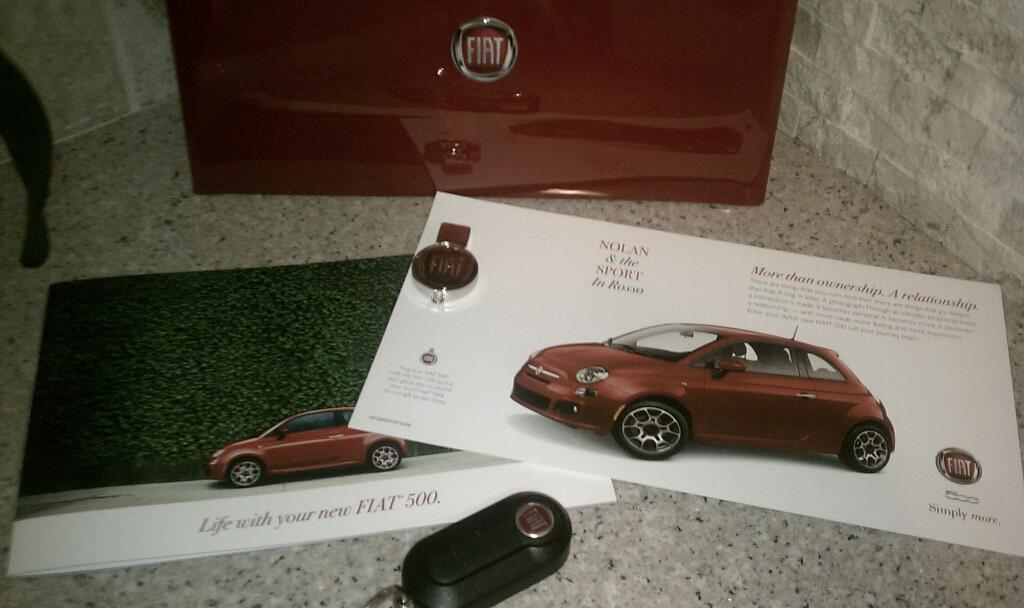 So after nearly 2 years and what can often seem like an eternity each week behind the wheel – the Fiat 500 Sport still shines. I average around 34-36 mpg in moderate to heavy traffic for my commute through Los Angeles and still get positive comments and smiles from the occasional gas station owner or passerby. While I may tend to drive like a grandpa on the freeway (huge gaps between cars, engine breaking to avoid using brakes, etc.) I drive the absolute wheels off the car when I catch a break in traffic or about town. I have been known to take my aggression out on the 5 speed manual and run the revs as high as the car will go and yet the little red car just goes. The leather interior shows only slight fade from my backside getting in and out everyday for two years and the plastics and trim pieces look completely new. I have yet to run into a situation where passengers or cargo could not fit inside the car and many friends are surprised at the amount of room in the back seat once inside. The Fiat 500 Sport has been the ultimate form of urban utilitarian transport for me and I even find myself happy to be back behind the wheel after testing an Audi sedan for a week. There is just something grin-inducing about a light, sprightly, 4 cylinder hatchback with a good manual transmission that makes driving enjoyable.