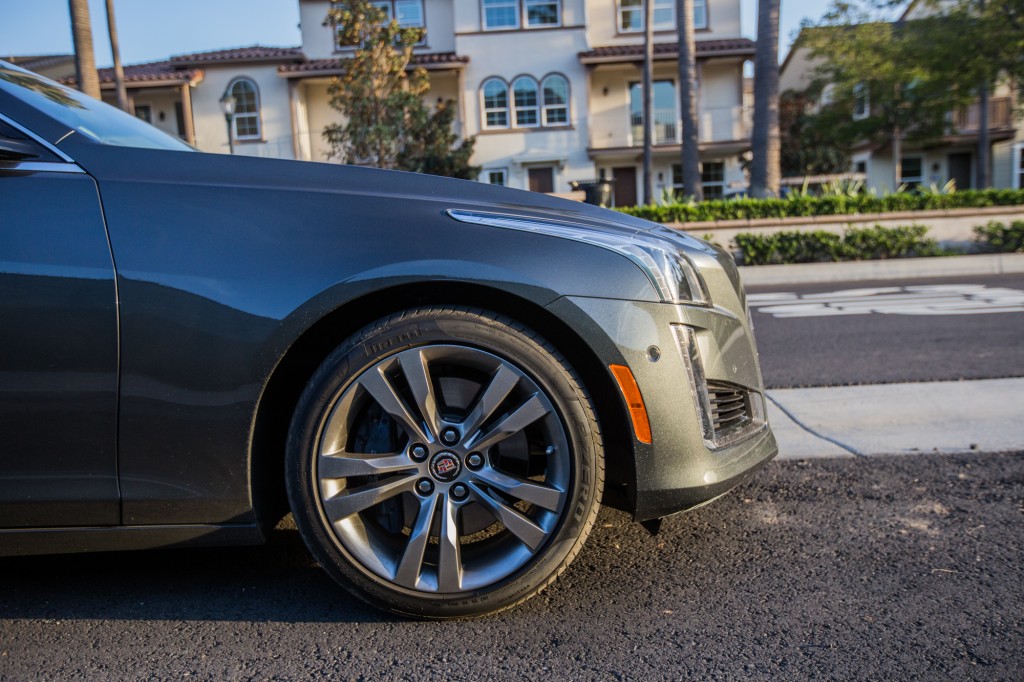 As the world continues to freaks out over destroying the globe it becomes more and more taboo to drive a car with MPG numbers under the drinking age. Modern performance models have begun to move down a couple cylinders and make use of forced induction instead of touting engine displacement like their thirsty relatives. The new M5 ditched its incredible V10 powerplant to make room for a twin-turbo V8 and even the legendary Mustang will lend itself to a turbo 4 cylinder in 2015. We have already reviewed the “rape the woman and children” CTS-V in the past and found the supercharged V8 with its 556HP to be simply stunning. So we were hesitant on how this toned down CTS with its measly 420HP from a twin-turbo V6 would live up to what Cadillac performance has already built.

To start out this review it is worth noting that the CTS V-Sport makes use of what GM calls an “integrated electronic sound enhancement system” that “gathers and measures information from the engine and uses Bose digital signal processing to deliver desirable tones through the Bose audio system.” Which is a fancy way of saying that it amplifies the engine and exhaust noise into the cabin through the stereo. The system also amplifies at varying degrees depending on whether the drive mode is in Tour, Sport or Track. I was pessimistic on this feature at first, but it easily one of the more impressive aspects of the CTS V-Sport and changes what would simply be a “fast car” into an all out theatrical driver’s car. The three sound clips below give some idea of the sound that the driver hears while in Sport mode, but the sound truly has to be experienced in person to realize how well done the sound enhancement system works.

Beyond the sound the new chassis and magnetic ride control are simply unmatched by any luxury sedan I have experienced recently. The new 2014 CTS feels so much lighter on its feet and handles corners like a much smaller car and feels much closer to the stunning Cadillac ATS that was our Car of the Year in 2012. The 420HP comes on strong thanks to the turbo system and the 430ft-lbs of torque become the performance headline as the car simply digs into asphalt and keeps clawing for as long as you beg it to claw. The new 8 speed automatic is nearly flawless and when utilizing the steering paddles the CTS will do exactly what you want it to do exactly when you want it to without hesitation. When settled down a bit the interior in the “Tour” driving is quiet and the engine note is barely noticeable compared to the fierce drone of the Sport and Track modes. For interior comfort the CTS does a decent job of offering a modern design that matches the outside of the car but many Mercedes and BMW buyers will likely have an affinity for something more mundane and less chrome and black plastic.

Overall the Cadillac CTS V-Sport is a perfect progression for those who want to move away from the single digit fuel economy numbers of the older CTS-V while still keeping all the powerful characteristics we loved so much. At nearly $60k the V-Sport competes with a well optioned E-Class and 5 series and I think it offers enough differentiation and sporting potential to help it stand out. The full-fledged CTS-V will debut later this year and should make this improved platform and out-n-out world beater. This was truly one of my favorite vehicles in recent memory due to the pure “grin factor” the engine induced and it is easy to see why the CTS was Motor Trend’s Car of The Year 2014.

One thought on “2014 Cadillac CTS V-Sport : Finding a Replacement for Displacement”