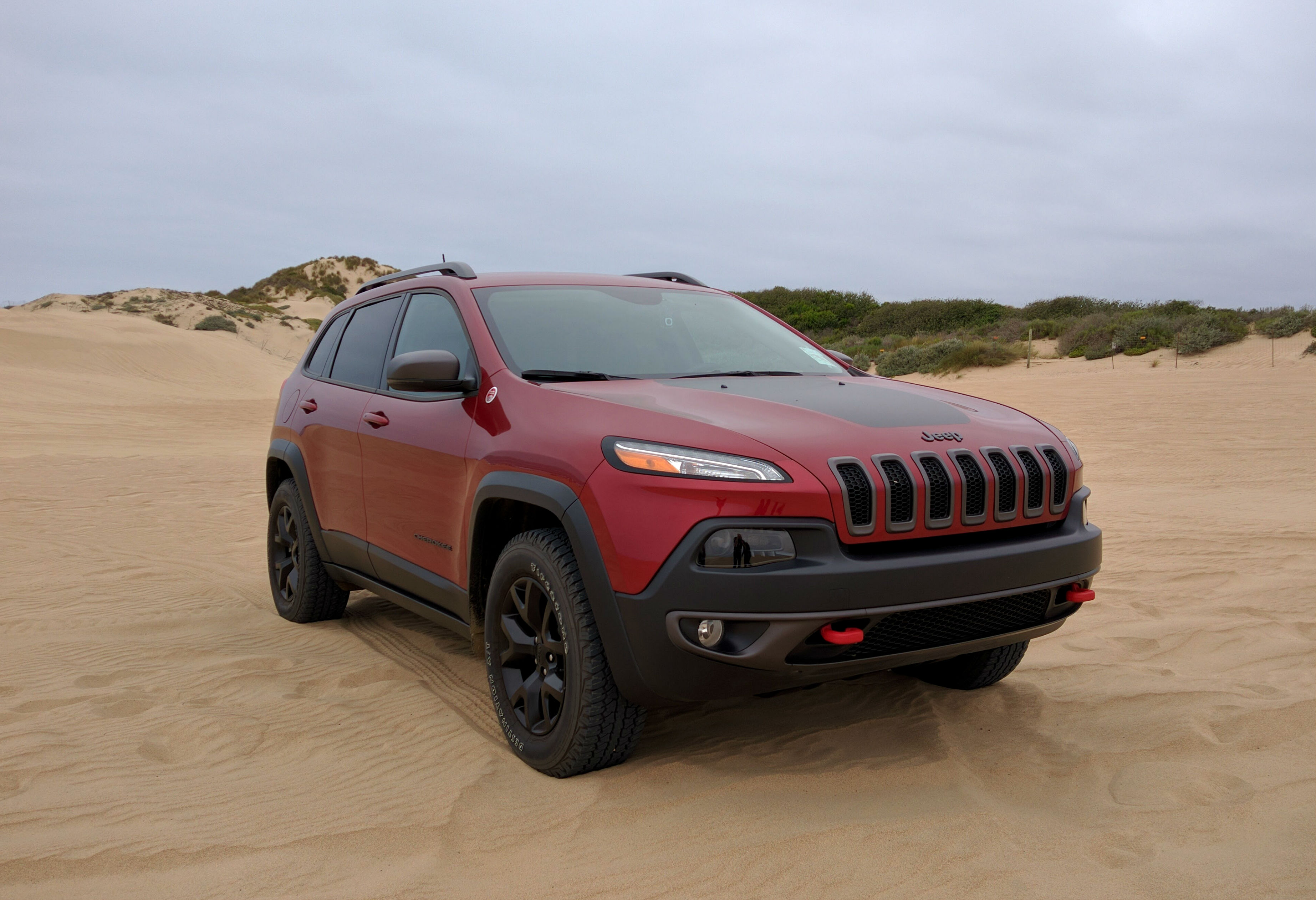 When Jeep decided they would bring back the Cherokee model name to go alongside the award-winning Grand Cherokee, enthusiasts were skeptical. That skepticism increased as it debuted as the first Jeep to ride on Fiat’s compact platform that underpins the Dodge Dart and Chrysler 200. The brand insisted it would still deliver “legendary Jeep 4×4 capability” and created a Trailhawk to showcase that off-road prowess. The Jeep Cherokee Trailhawk even features the legendary Trail Rated badge, which means it will perform like a true Jeep in tests of traction, ground clearance, maneuverability, articulation and water fording. We decided to take a trip out to Oceano Dunes SVRA near Pismo Beach, CA to test each scenario and see if the Fiat and Jeep marriage has birthed a proper off-roader. 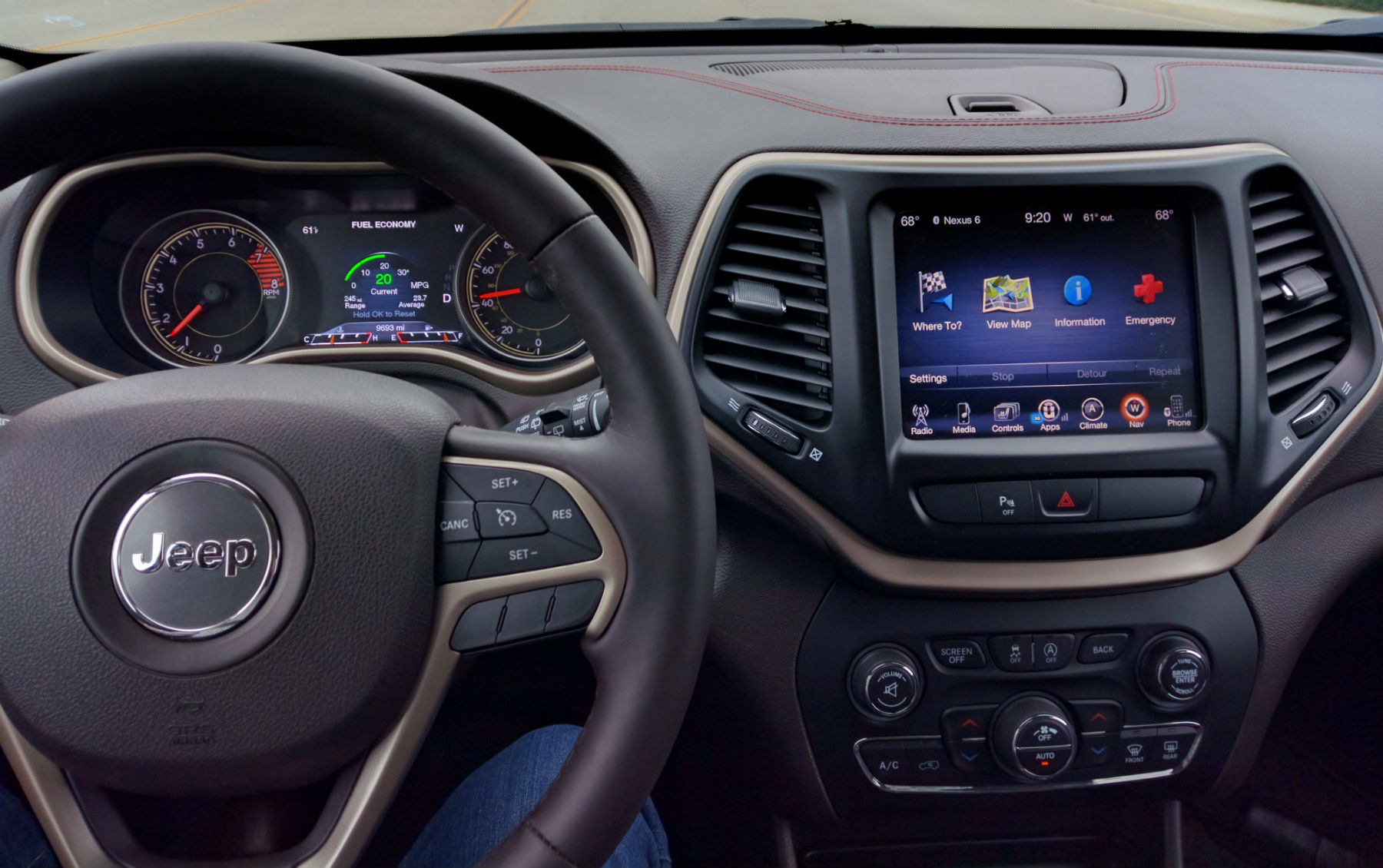 We set out on an early foggy morning in the Los Angeles area to drive 170 miles up the coast to Pismo Beach. Heading up the 101 freeway along the California coast into Santa Barbara, we began to realize just how comfortable and refined the Trailhawk is on the highway despite its “I’m a mean 4×4” exterior. The brown Nappa leather and bronze-colored plastic trim are handsome, and of a similar quality to the materials in the more expensive Grand Cherokee. The 9-speed automatic has been a sticking point for customers, and for us, it quickly became apparent why. The transmission never seemed to be in the preferred gear, and the downshifts didn’t come quick enough. The shifts were smooth, but I often gave too little encouragement to the accelerator pedal, and the car would jump from 8th down to only 6th when I could have really used 4th gear to pass a vehicle at speed. With an enthusiastic stab at the throttle, the transmission would shift more dramatically into the preferred gear, but a modern car shouldn’t require that much motivation to get moving at a decent pace. The Trailhawk was equipped with the new 3.2L V6 that produces a respectable 271 horsepower, and a claimed 29 MPG on the highway. We saw around 22-25 MPG with spirited highway driving.

We were all rather novice to driving in sand, but knew enough to “air down” the tires as we approached the entrance to the beach, and dropped the tires down from 34 to 22 psi. We would quickly learn — after a friendly UTV pulled us out of a ditch — that 15 psi was more suited for traction in the powder-like dunes. The Trailhawk Cherokee has five different settings in the Selec-Terrain® traction control system including snow, sport, sand/mud, rock, and automatic. We threw the setting in “sand”, and ventured out to get a feel for the dunes. The rear 12-volt plug came in handy to keep a cooler plugged in to store food and drinks as we headed out of civilization and into the dust. The 9-speed transmission that had its issues on the road was of no concern as we ventured up and down rolling hills without an issue. The Cherokee was equipped with a hill ascent and descent control system, but we were disappointed to find that it required the tires to be inflated closer to factory settings in order to function. This makes the system essentially useless to most folks who take a fair bit of air out for most terrain conditions. This is likely a mandate by the legal team, and owners will probably be able to bypass it at some point. After only dipping our toes into the Oceano dunes, we settled in to set up camp, slapped an American flag to the antenna, started a fire, cooked a few hotdogs, and prepared to dive into the next day of “duning”. 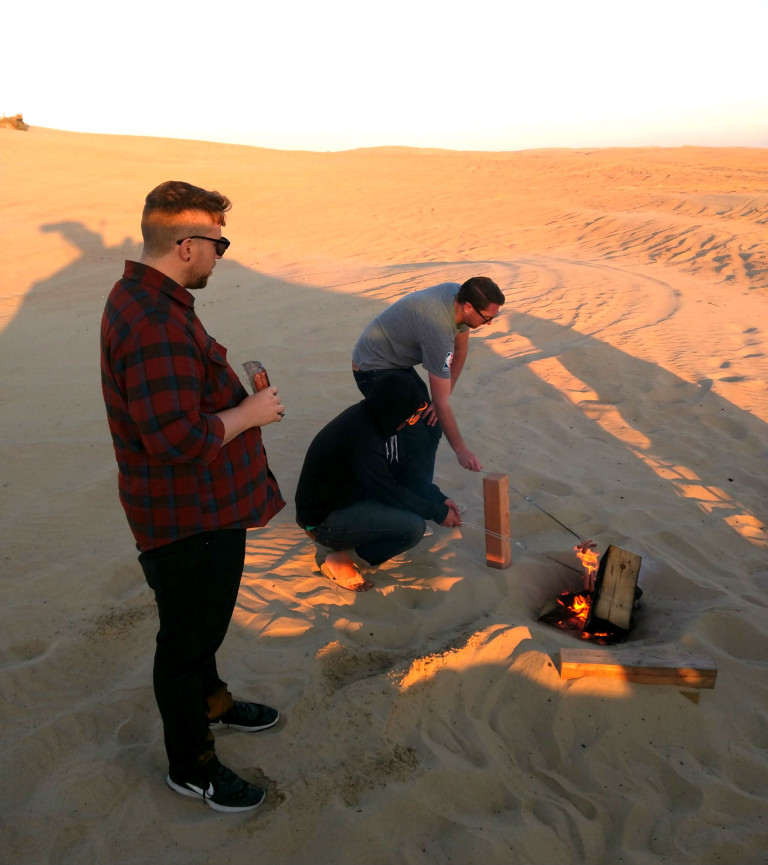 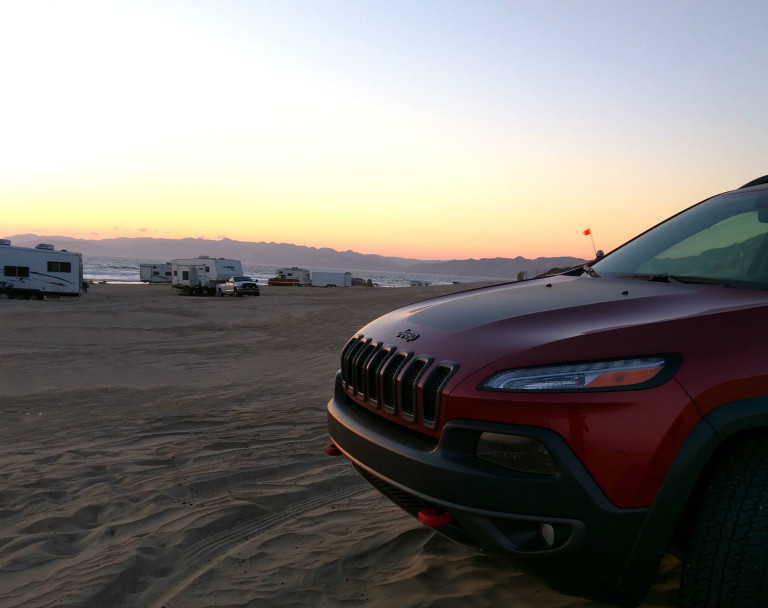 The morning of our second day we would start by renting an ATV from a local vendor to act as a scout and help ensure we didn’t take a wrong turn and test the body rigidity of the Trailhawk. The beach was brutally windy, and a fine layer of sand rushed over the dunes to completely throw off any depth perception one could manage in the massive expanse of beige. After a tip from the ATV guide on the best route out to the end of the dunes, we set off 10 times farther than we had the day before. In an off-road park with hundreds of people and vehicles, there’s nothing eerier than exploring out into an area where you’re all alone. At nearly 30 square miles, the Oceano dunes are perfect for finding some open space and getting lost on occasion. We followed the ATV up several steep peaks and had some nerve-racking moments crossing some narrow ledges to pass through the beach. The Trailhawk seemed to only be limited by our own nerves and would make it up or down anything we threw at it with the great approach angles and perfect traction management. ATVs, UTVs, sandrails, and other hardened off-road machines gave some questioning glances at the newer Cherokee as we reached the extended areas of the park. Unlike many of the other rigs in the area, we could take refuge inside a leather-lined, air conditioned, and smooth-riding Cherokee once we dismounted the ATV.

Therein lies the key aspect of this newer Cherokee: it offers comfort to go along with your adventure. In an era where the notion of “glamping” exists, the Trailhawk is the right car for those who want modern amenities with a side of hairy-chested fun. It certainly doesn’t offer up as many possibilities for customization to turn it into the ultimate 4×4 like the older Cherokee, but it is much more pleasant to live with day-to-day. And for the $40k price tag, the Cherokee has to offer more creature comforts to serve up with its all-terrain capabilities. But thankfully in a market where younger buyers often see a vehicle as an appliance, the Jeep brand still offers freedom and a way to escape the mundane. So while everyone else is “glamping”, you can escape to a beach and kick up a little sand.

View From The Top : The Secret Behind Jeep’s Success