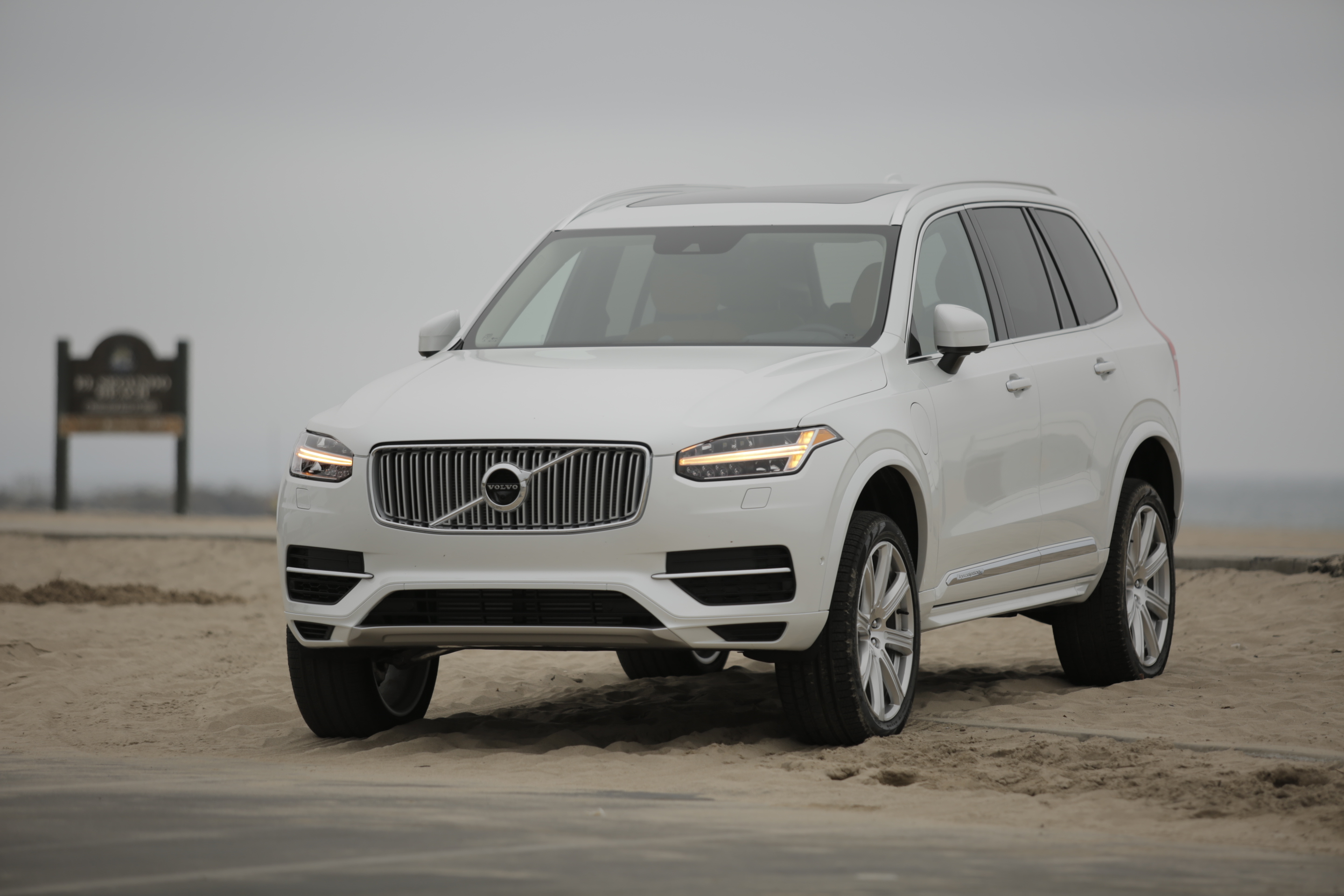 Volvo has always been a brand known for its safety and creating some of the most iconic wagons in automotive history. However, the Swedish automaker has always been just on the edge of luxury in some dark corner of the market. Sharing shelf space with “almost-luxury” brands like Saab ultimately means you are on a trajectory that could end your business. In 2009 Chinese automaker, Geely, stepped in to take control over the iconic Volvo brand for $1.5 billion and try and build them into a true contender. Many were skeptical but after 5 years the brand has grown from global sales of 373,525 units in 2010 to a record setting 503,127 for 2015. In 2016 the brand has already passed the 200,000 mark and will shatter more records due in part to the success of their first all-new vehicle under Geely – the stunning Volvo XC90 SUV. 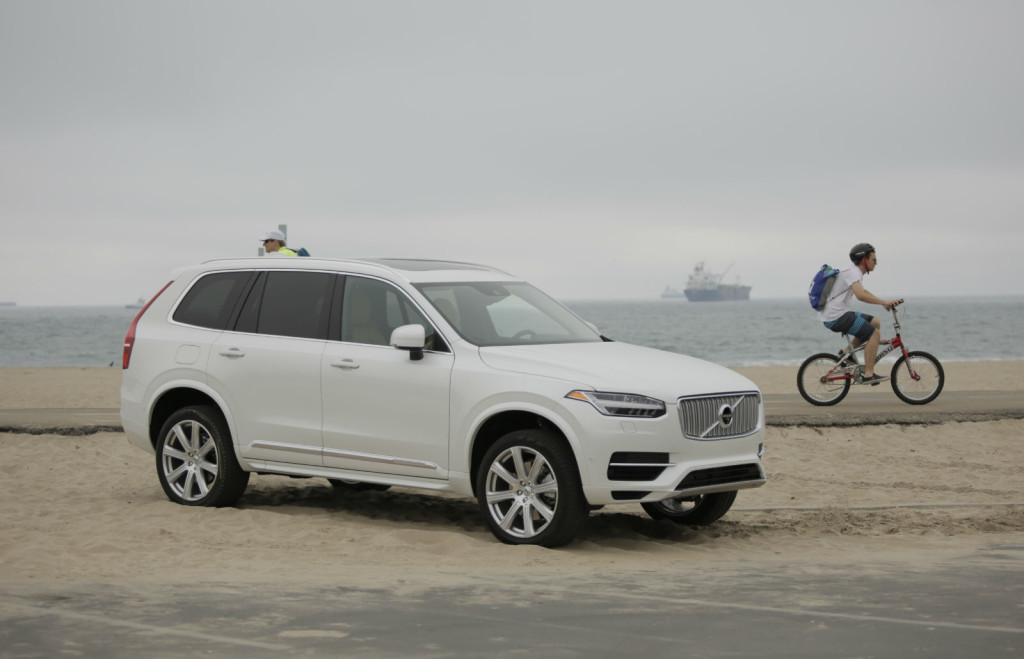 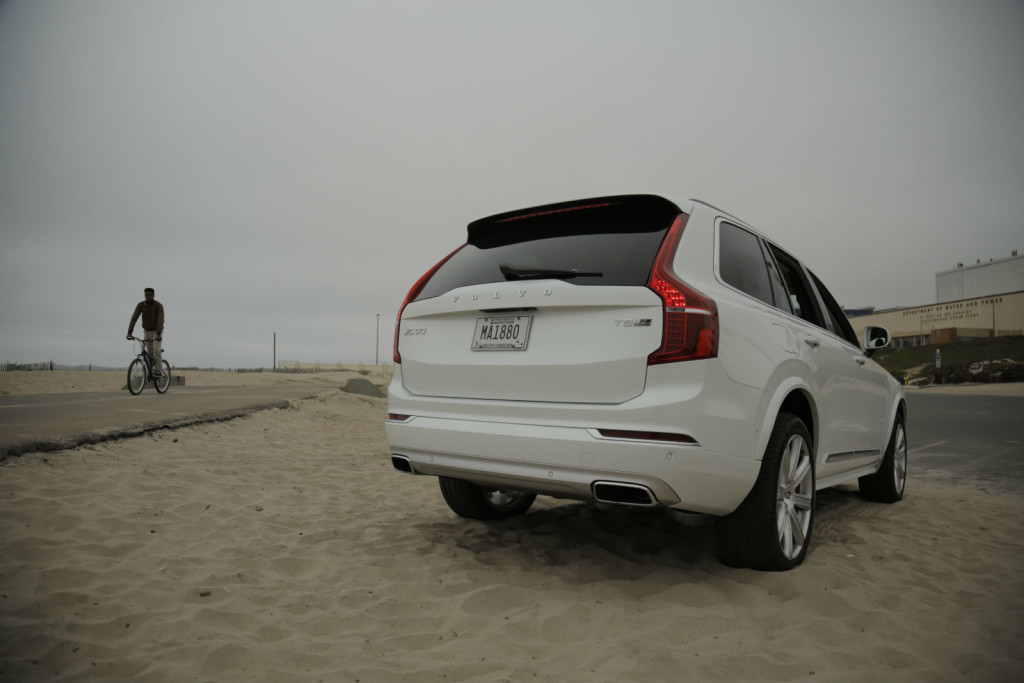 When the new XC90 debuted the media was abuzz with positive remarks for the handsome exterior and the car lives up to the hype in person as our model was stunning in Crystal White Pearl paint. The front grill still pays tribute to the classic Volvo brand design but the new headlights with the “Thor’s Hammer” LEDs help stand out from the crowd. The body lines of the SUV aren’t drastic but are beautiful in their simplicity. The boxy shape with rounded edges echoes some of the design language from brands like Land Rover and help give it a premium and somewhat rugged stance. Out back the XC90 has a similar vertical taillight design to the outgoing model, but much tighter and svelte in its execution. Where the older XC90 was large and somewhat bulbous from many angles this new model looks more like a grown-up wagon and plays to the strengths of the Swedish automaker. Our XC90 was in the highest T8 trim which meant that it has a plug-in hybrid drivetrain. There were no blatantly obvious differences on the exterior to give the T8 away aside from the charging port on the driver’s side fender. 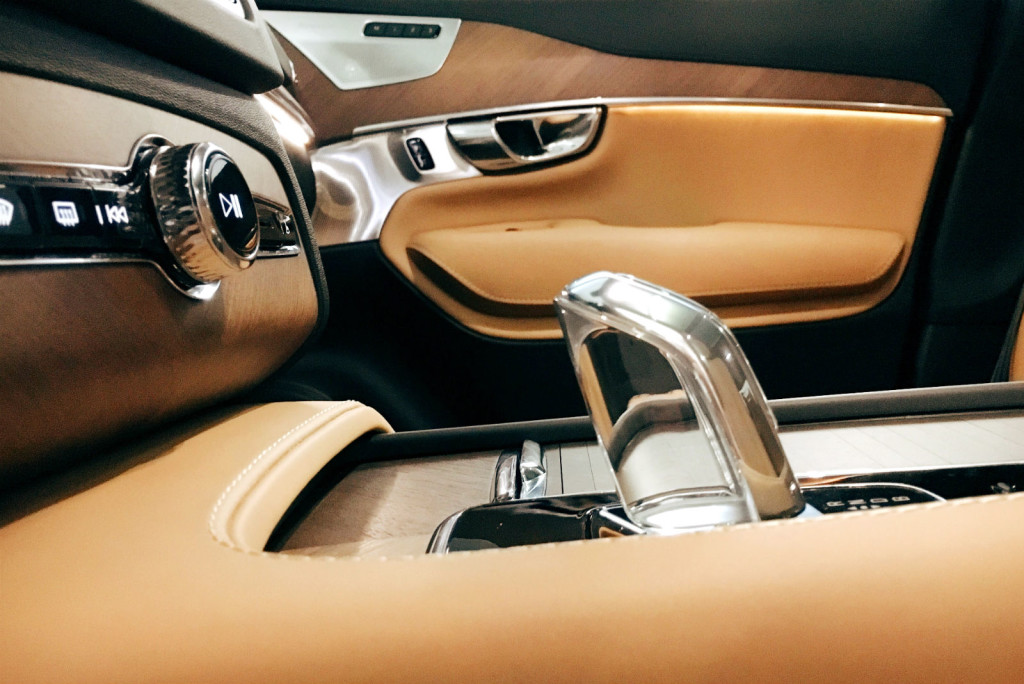 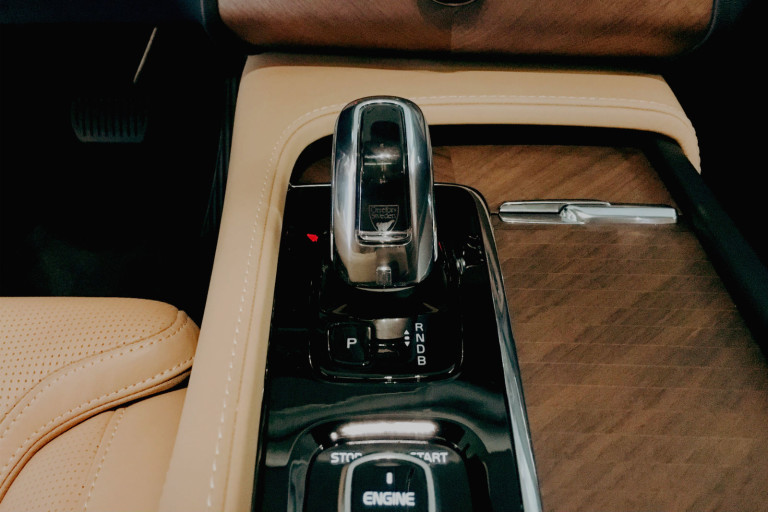 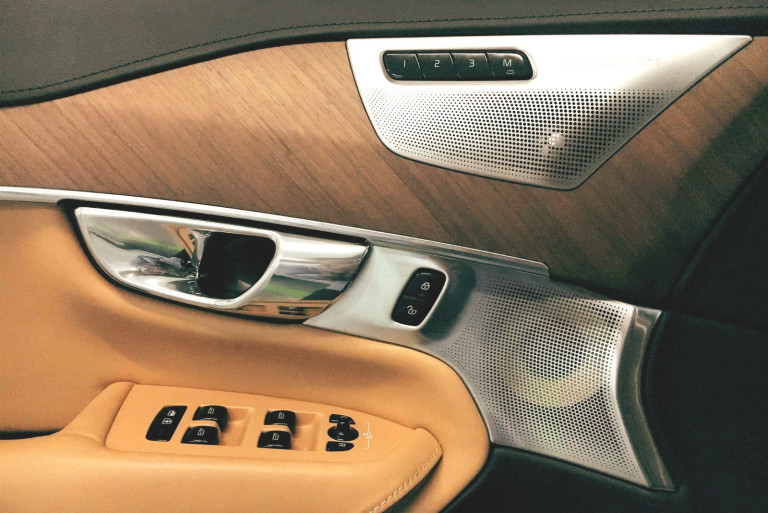 If we were impressed by the new exterior then the inside of the Volvo XC90 nearly took our breath away. At nearly $80,000 you expect a level of luxury, but what Volvo and Geely have accomplished is simply amazing. Sitting behind the wheel you are treated to soft, warm, and perforated amber leather. The dash in this Inscription equipped XC90 will add the nicest walnut wood inlay I have seen in any modern car in this segment. You can truly feel the grain as you run your hand across the surfaces of the dash and door panels. While driving the XC90 I would occasionally pass an owner of an Escalade Platinum and simply shake my head and think – “You could have saved $15k and been so much better off.” Brilliant touches like the crystal shift knob made by Orrefors come aglow in the evening to add to the experience of entering the car.

There is a warmth about the amber interior with a pleasing yellow glow of the interior lighting here – no bright white LEDs that can be cold and sterile like many in the class. The large screen display is very easy to navigate and includes support for Apple CarPlay. Like other large touch screens we have tested in cars like the Cadillac ELR, you will get hundreds of finger smudges across it that will need to be cleaned with an included cloth. The 19-speaker Bowers & Wilkins system is extremely crisp with low distortion and the individual speakers are draped with gorgeous metal coverings that would be at home in an art gallery. Certainly worth the additional $2,500. Additional useful features like a button inside the rear hatch to change the height of the vehicle’s air suspension for ease of access to anything stored in the cargo area were Swedish levels of thoughtful. Should certainly come in handy while loading or unloading your Ikea furniture. 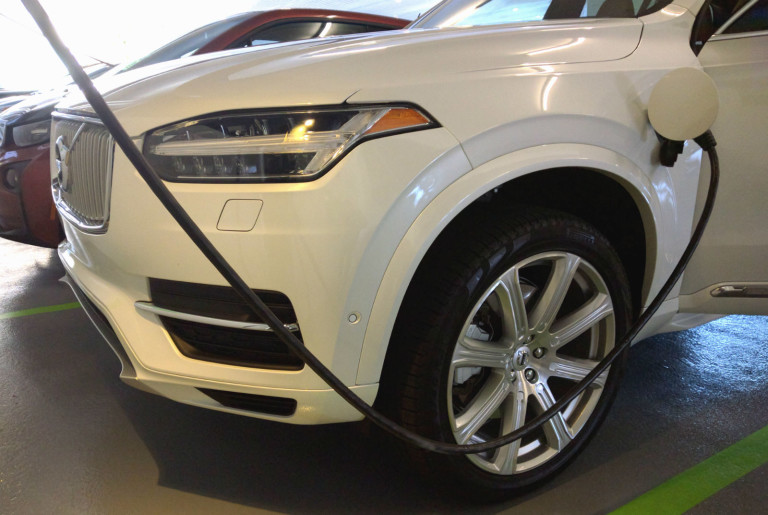 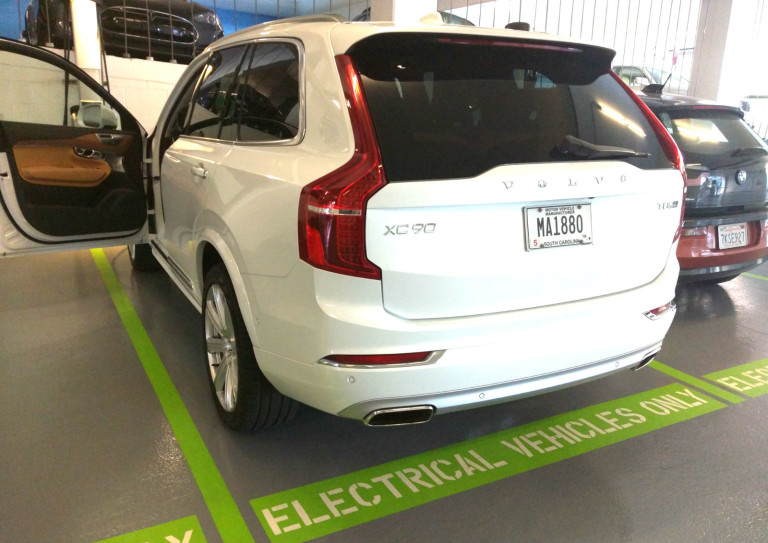 Behind the leather-wrapped steering wheel you will find also plenty of power on tap. The XC90 T8 takes advantage of the new twin-charged 2.0L engine we most recently tested in the XC60 but adds another 86 horsepower from the electric powertrain to bring it up to a rounded 400 horses. The combined motors also produce an astounding 472 lb-ft of torque and the SUV pulls hard from any speed with help from the 8-speed transmission. At times when you prefer efficiency over speed the XC90 is rated to drive 20 miles on the electric motor alone. In heavy traffic we were even able to get that range closer to 30 miles through regenerative braking. My daily commute is about 40 miles in each direction and when charging at home and at the office to get a nearly 50/50 mix of gas and electric the XC90 would average around 80 MPG. When in just hybrid mode the large 7-passenger SUV could also achieve numbers around 35-38 MPG in stop-n-go traffic.

The handling of the new Volvo XC90 has improved from the outgoing model with help from a loss of 275 pounds through the use of boron steel and the finely tuned air-suspension system. Volvo chose this lighter steel over aluminum due to the increased strength to keep occupants safer in a collision. To fully experience the next level of safety our model was equipped with the Convenience Package to gain features like adaptive cruise control with pilot assist, a lane keeping aid, and park assist. On the highway the XC90 will now essentially drive itself when enabling cruise control. The system can accelerate and brake to keep up with the car ahead of you and give steering inputs to keep you straight in your lane. The automatic steering system does not work at speeds over 30 miles per hour and is not completely hands free or self-driving just yet. The XC90 lane keeping assist system will give warning and even turn off if it senses your hands are not on the wheel after about 15 seconds. For traveling around Los Angeles it was a godsend and allowed minimal input for the morning slog through traffic.

With greater use of technology there often exists a greater chance of something going wrong. It may seem like a tired theory from the old world of carburetors and throttle cables – but it happened to be correct in the case of our XC90. I cannot give higher marks for this car for the majority of our time together and it is instantly apparent that it deserved to be SUV of the year. Unfortunately, near the end of our test period with the newest Volvo the system controlling the vehicle decided it didn’t want to start the car or allow us to shift out of park. In a modern vehicle with no mechanical ignition, shifting, or parking brake — your XC90 doesn’t move when it decides it doesn’t want to move. Several owners have claimed that updating or replacing the VDDM (Vehicle Dynamics Domain Master) solves the issue. Volvo was great during this time and had the car towed to service to find out that a software issue — that has since been fixed — caused the car to not start or shift gears. I am confident that simply disconnecting the car battery and letting the car computers completely reset would have had us on our way as well but we wanted Volvo to be able to find a true solution. At just over $84k the XC90 T8 is at the forefront of modern vehicle technology and early adopters may need to be ready for a couple of bugs along the way. If you asked whether the issue we had would keep me from suggesting the XC90 I would say — go experience one for yourself. Then you too can experience the complete and utter sadness when they ask for the keys back.