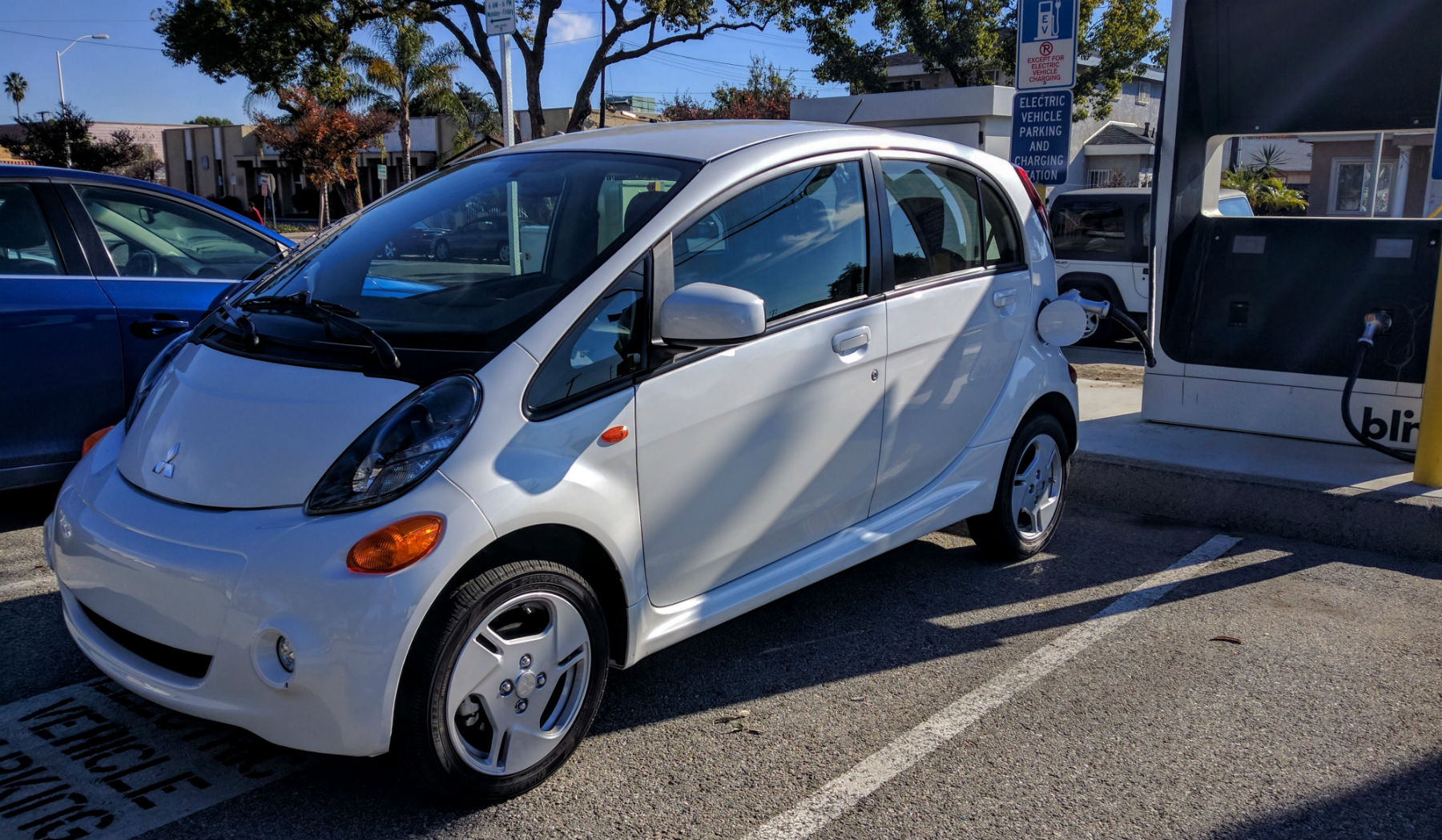 When the latest batch of all-electric vehicles is discussed, people seem to forget about the Mitsubishi i-MiEV. Which is a shame because Mitsubishi was actually early to the game when they released the i-MiEV to the world back in 2009. The lack of a true marketing push in the US at launch, combined with the release of the Nissan Leaf in 2010, helped pushed this little jelly bean of an EV into the abyss. Critics were also rather harsh on the i-MiEV for its shorter 62-mile range and lack of refinement. But there is a bit of charm and simplicity to the i-MiEV that has always fascinated us here at the Ignition Blog. We decided to take a deeper look at the latest 2017 model year of the “forgotten EV” in to see if Mitsubishi might have the best-kept secret in the market. Could this be the best worst EV on the market? 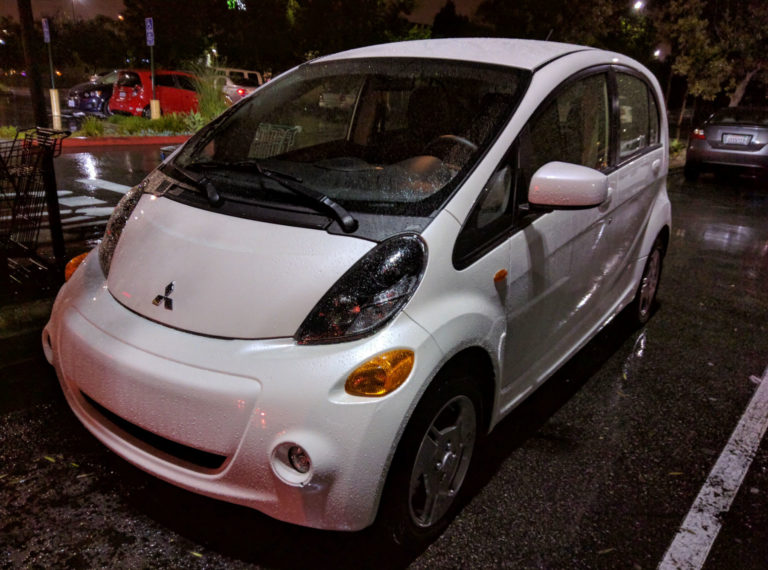 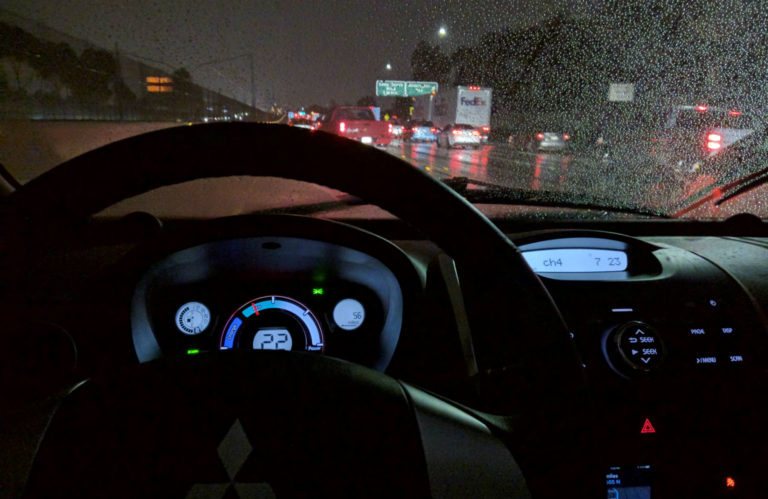 Our 2017 Mitsubishi i-MiEV ES arrived nearly identical to the i-MiEV that first debuted in 2010. There is no AUX input (you read that correctly), no Bluetooth connection, and no middle seat in the rear (a plastic cover that hides access to the tire inflator awkwardly fills that middle seat). Our loaner vehicle was priced around $23,000 and buyers in California can look forward to a nice $10,000 in tax rebates to push the final cost under $15,000. That price makes the i-MiEV the most inexpensive all-electric vehicle in the US.

This particular week that we had the EV was projected to be one of the coldest and rainy weeks of the year. This didn’t bode well for us as most EVs struggle with their electric heaters and the i-MiEV would be no exception. The first day of my normal commute would see clear skies and over 68 miles from a full charge as we headed down the hill to the office. But heading back up the hill would be more concerning as clear freeways (70MPH speeds) and an incline would lead to a dismal 46-mile range. We coasted home on a prayer with 5 miles left on the clock.

The next day, the rain would begin. Driving through the dank and congested LA freeways would be a white-knuckle experience. With the wipers at full tilt and the defroster blasting, I struggled to get clarity out the front windshield and watched as the i-MiEV consumed kilowatts in large portions. I cracked the windows to clear up the fogged glass and turned up the seat heaters to give the tiny Mitsubishi’s climate control a break. The i-MiEV was more than willing to push through the elements, but it wanted all of my focus and this would be a team effort. We crawled forward as “man and machine,” making our way through standing water, overturned vehicles, and general chaos to reach our final destination. When parked the total range would read 1 mile but the awkward white EV seemed willing to go as far as I willed it to go. Through that rather harrowing drive, I had formed a bond with the i-MiEV that is no longer common with vehicles and their owners. 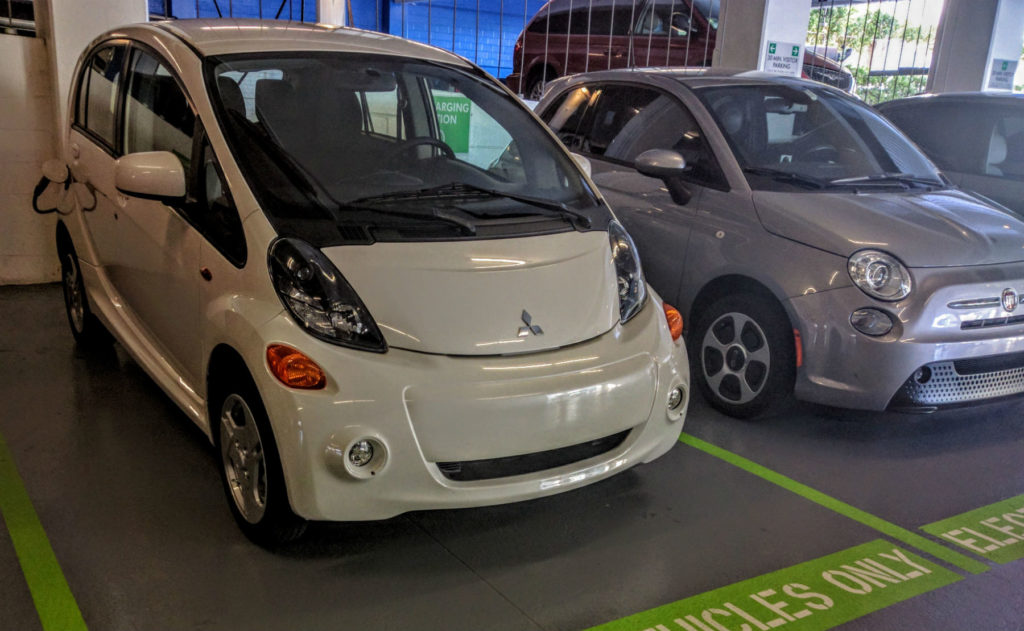 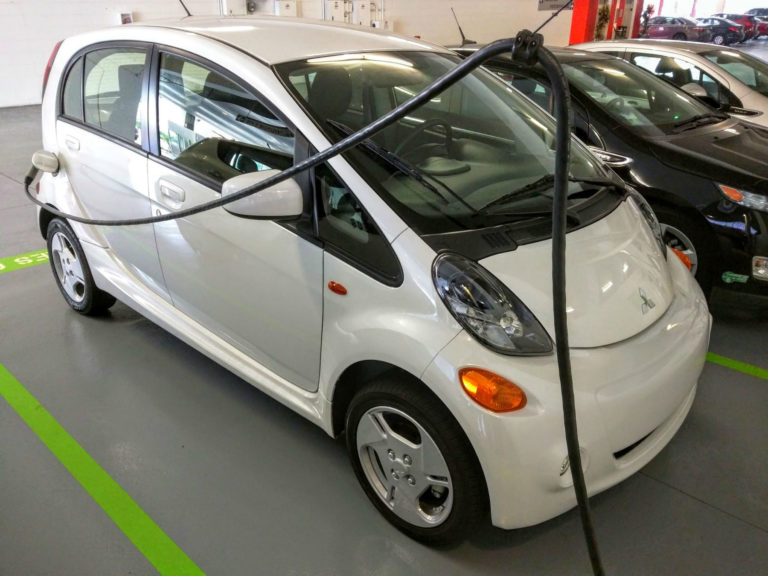 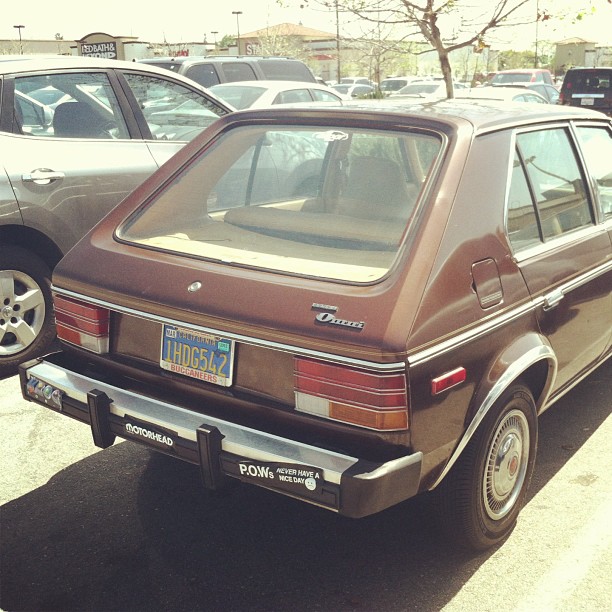 The type of bond that I felt with the i-MiEV is similar to the bond I had for my 1980 Dodge Omni. The Omni was simply “a car.” It had a radio, a steering wheel, cloth seats, top speed around 80mph, and driving it was treated like an occasion. You had to learn its quirks and plan your trips around the quirks in its “personality.” In the same way, you must put some thought into a drive in the Mitsubishi i-MiEV and cannot simply hop in and go. While the interesting quirks for the Omni were things like figuring out what to do when the brakes overheat, the Mitsubishi requires that you learn things like the location of local EV watering holes. In a world where the modern car lets you zone out and listen to your favorite Spotify playlist, the i-MiEV is a wake-up call to focus on the drive.

Even though the i-MiEV has a limited range, it is thankfully equipped with a DC or CHAdeMO Level 3 charging capability. Using the Blink app we were able to find a local DC charging station only a couple miles away. While the promise of a full charge in about 30 minutes is great, reality can be somewhat of a letdown. With each charge, the Blink charger would give up after 15 minutes and took multiple sessions, totaling over 45 minutes in all, for an 80% charge. This seems to be a frequent issue with the public DC charging stations as we had the same problem with the Kia Soul EV. This may make longer trips a bit of a chore but most owners will keep their i-MiEV drives limited to in the city. Therefore, if you are looking for a limited commuter with plenty of character – Mitsubishi may be worth a look. If you are looking for less planning, more range, and are willing to pay a bit more then the i-MiEV may not be for you.

If paying over $10k for a new car with limited use is still a tough concept then the used market may have something to offer. This marks an interesting period in used car sales as many used all-electric EVs hit the market. The Fiat 500e, Nissan Leaf, and Chevy Spark EVs are popping up at extremely low prices and show the market’s true value for vehicles with 100 miles or less of range. Any of these vehicles can be had in Southern California for around $6-9k with under 30k miles. Many i-MiEV have been in used markets prior to this new flood in EVs and we expect them to drop around $6k or lower as they sit on dealer lots. At that price, this little egg-shaped Mitsubishi would be a reliable commuter and bring some of the “drive” back to your driving habits.