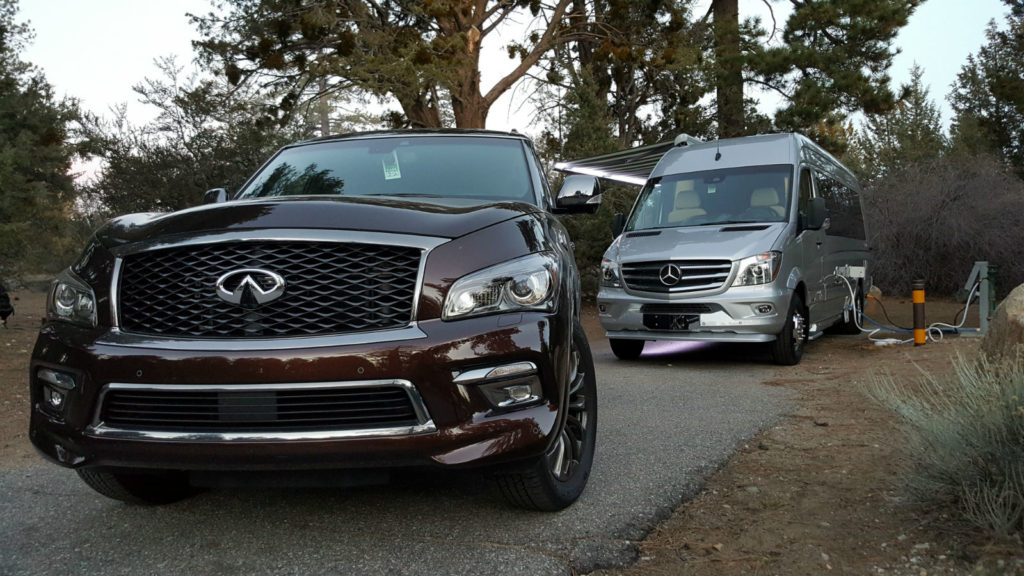 A product specialist gave me a tour of the 2017 Airstream Tommy Bahama Touring Coach prior to our trip and asked, “Have you ever operated an RV before?” I thought for a moment before my machismo uttered, “Sure, of course.” The more rational part of my brain, i.e. my wife, would be in the showroom for this portion of the demonstration and therefore unable to help me avoid this moment. After some additional instruction on how to connect the water and sewage lines, how to work the radio, and other crucial bits of information that I mostly understood, we set off to camp at Big Bear Mountain. On paper, the trip up the mountain with a $180,000 Airstream Interstate and a $72,000 Infiniti QX80 would seem like the ultimate in luxury travel. We would, however, find out that money can’t buy convenience and that I had clearly never operated an RV in my life prior to this trip. 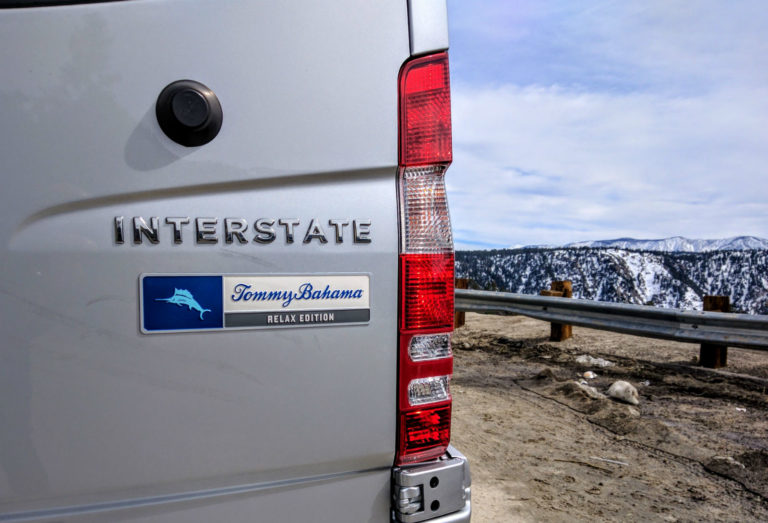 The initial plan would be to borrow the mighty 2017 Infiniti QX80 in order to tow the smaller Airstream Basecamp travel trailer. Months had gone into reserving the campsite and studying the features of the Basecamp along with various tips on towing to make sure we were ready for our journey. The week of the trip, the folks at Airstream would inform us that the Basecamp had a scheduling conflict and we would instead be piloting the Airstream Tommy Bahama Interestate up to the Serrano Campground near Big Bear. The Airstream Tommy Bahaha Edition Touring Coach, which starts as a Mercedes Sprinter, is outfitted with all the luxuries you could need including a shower, flat screen televisions, powered outdoor awning, queen sized bed, and built-in bar storage rack complete with signature Tommy Bahama bar accessory kit. All the items one could expect for a price of just over $180,000.

The Airstream is powered by the Mercedes-Benz 3.0L BlueTEC V6 turbo diesel and is an absolute joy to drive. While there may only be 188 horsepower on tap, the 325 ft-lbs of torque easily propel this large machine forward. We flew up the mountain to Big Bear and were able to average over 20 MPG in the process. Our Airstream was also outfitted with the optional air suspension system and the ride and steering were exceptionally balanced for both comfort and drivability. The Airstream may have even cornered flatter than the Infiniti QX80. Additional features like lane-keep assist and both side and rear view cameras that appeared in the rearview mirror were a life saver when piloting the large vehicle on our trip. 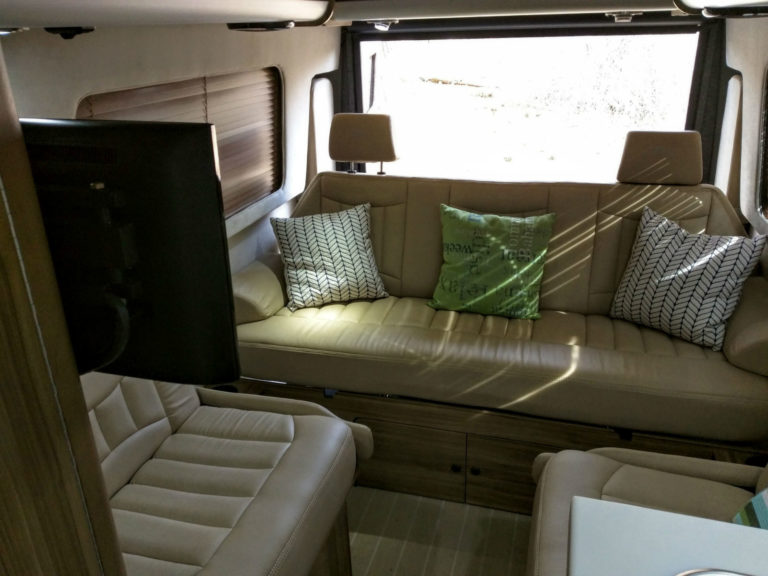 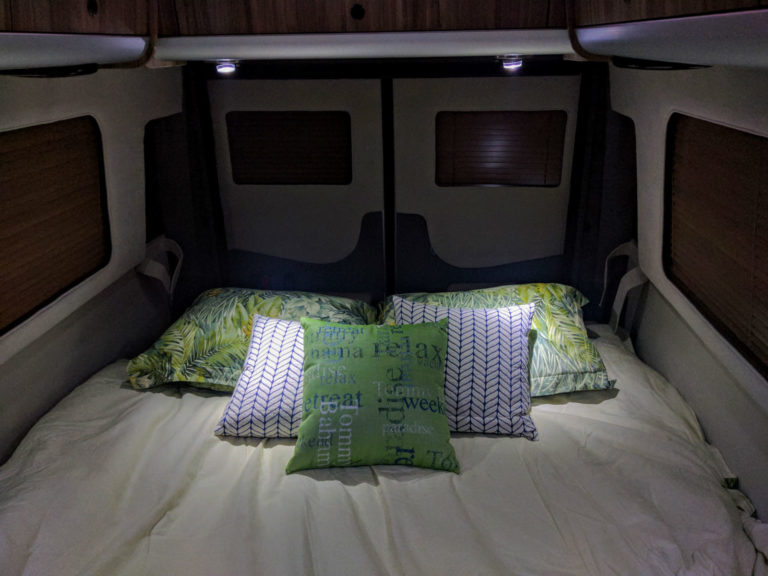 Upon arrival, I went about connecting the power, water, and sewage lines to the available hookups. Power would be no big deal and soon our running lights, TVs, music, and assorted luxury accessories were ready for the weekend. Water, however, would prove to be much more difficult. Once connected, the water began to shoot directly out of the bottom of our Airstream. A call to our Airstream product experts would reveal that they had left the valves open to flush the system and we would need to close several valves to resolve the problem. Using skills that I had learned from Pipe Dream on Windows 95 I leaped into action, digging under cushions and cabinets to locate and turn assorted plumbing valves to route water towards the sink and shower. 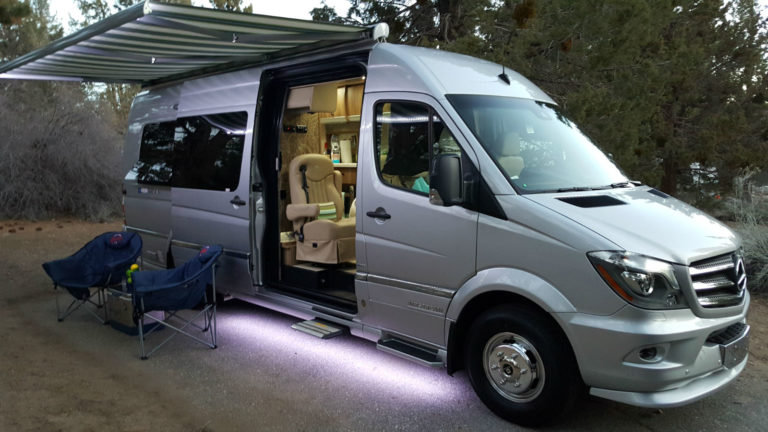 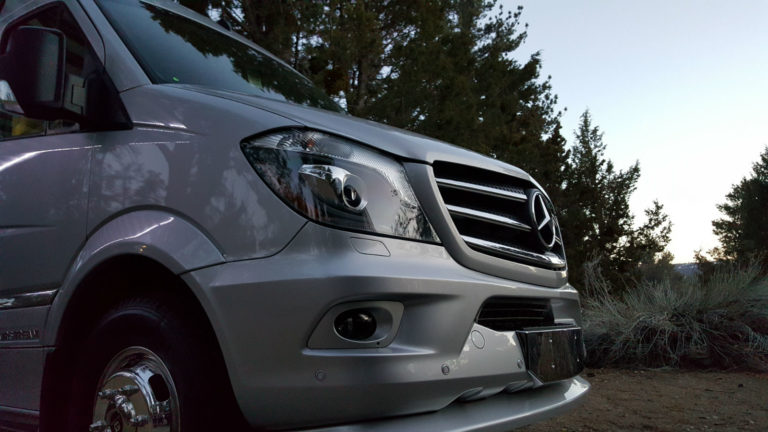 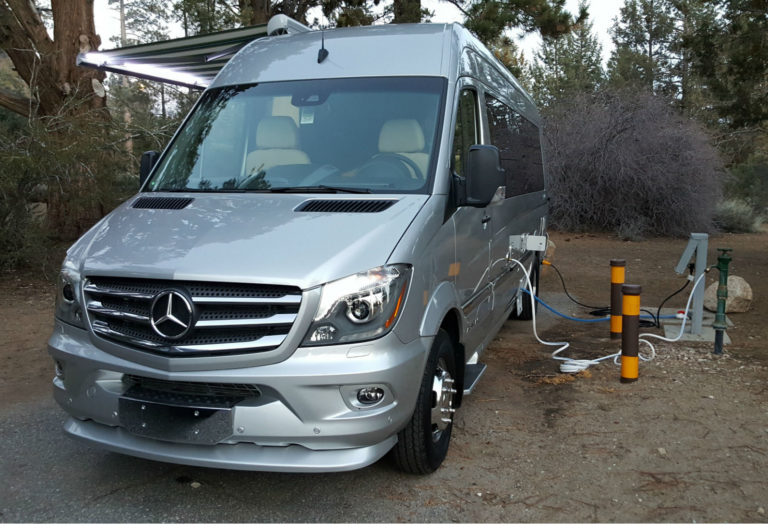 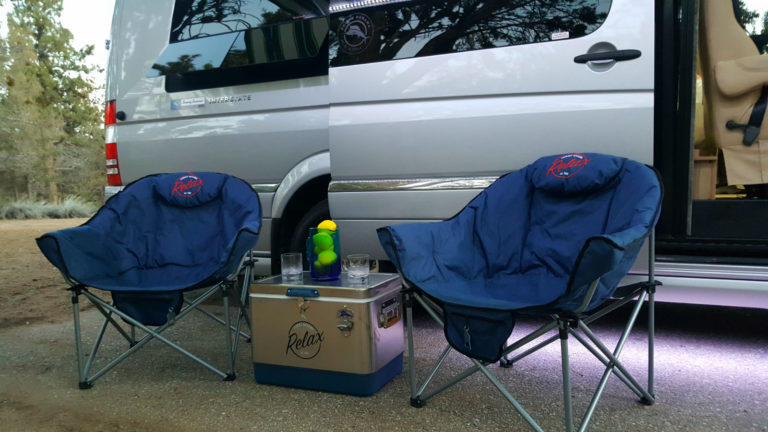 Certain of my success, I turned on the water to find it was no longer leaking out of the bottom of the vehicle – only from the top of the sink. Air pressure within the plumbing had forced its way out ahead of the water and broken the seals on the sink near the bar (look carefully at bar photo above to observe the leak). This leak would render features like the shower and any other form of running water useless as the gray-water tank would fill nearly every hour that we were connected. Pushing forward, we extended the powered awning, threw up the Tommy Bahamas chairs, and settled in for a drink by the fire. Who needs water anyway? Things could only get better from here on out. 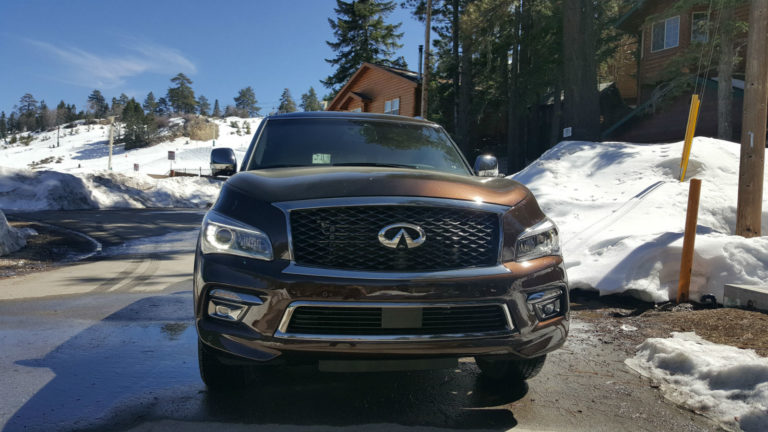 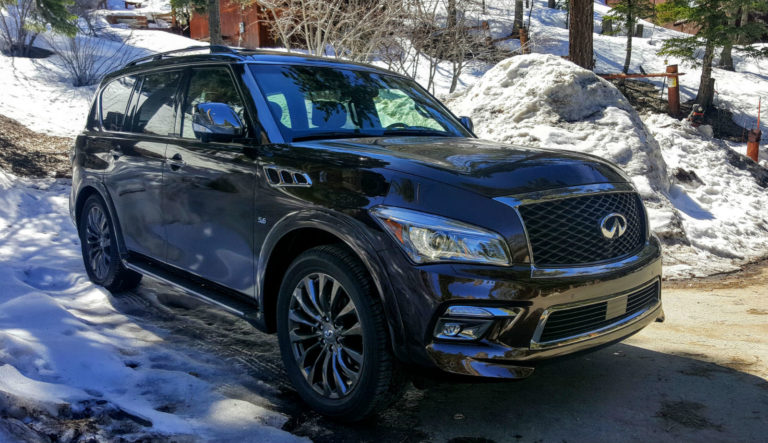 Despite the lack of an Airstream trailer to tow, we decided to take the Infiniti QX80 along for the trek up the mountain. With 400 horsepower from its 5.6L V8 engine, the QX80 feels much lighter than the nearly 6,000lb curb weight would suggest. The only downfall to all of this power is the fuel economy and the Infiniti ended up drinking more fuel than even the larger Airstream at 16MPG. Our Infiniti QX80 was outfitted in a rich Mocha Almond exterior that may be the best dressing to compliment the vehicle’s bulbous styling. The design of the QX80 takes some time to appreciate and simply doesn’t scream “I bought a $90k luxury SUV!” as much as the competition. It did garner several looks while driving around downtown Big Bear, but most seemed to be confused by it rather than impressed.

On the inside, the QX80 confirms its luxury status and featured elegantly stitched truffle brown leather seats, rear-seat entertainment system, ash wood accents, and Ultrasuede headliner. With AWD and heated leather seats, the QX80 was well at home in the mountains for this rather-cold weekend away. Bringing the Inifinti along would also avoid the complications of disconnecting the Airstream from the hookups and slogging it through town to grab a bite to eat. We discovered that the Infiniti QX80 Limited is the cozy “cabin in the woods” of luxury vehicles and allows the owner to be comfortable whilst avoiding any unneeded attention. It’s a car for the person who feels that a high-rise in the city and an Audi Q7 are “extravagant” and “too showy.”

Unlike the Airstream, the Infiniti would not lead to any early complications on our trip or involve any unexpected plumbing work. But by the end of the trip, it too would end up laying a damp blanket on the warm hopes of a luxury camping weekend.

The Highway Back To Reality 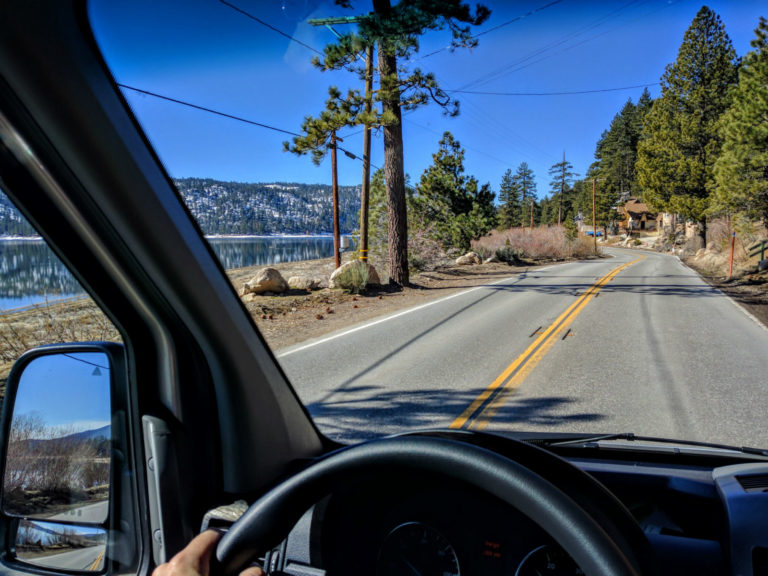 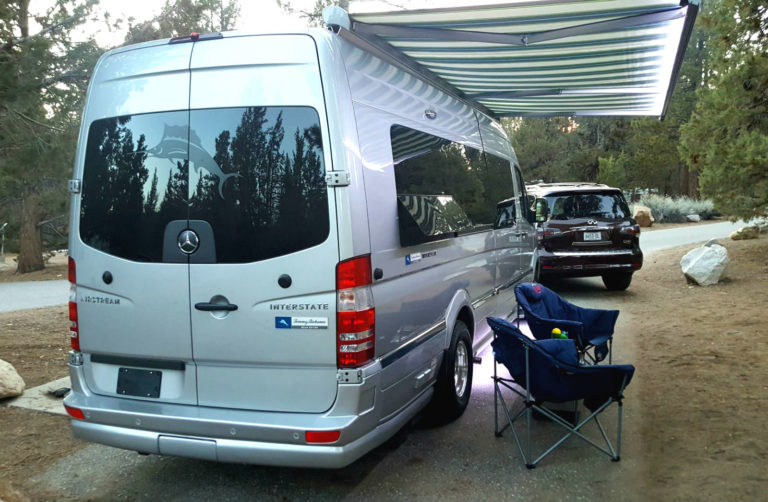 So the water didn’t work but we still had the luxury of things like powered sun shades on the windows, a fridge, heater, power hookups and even a backup solar-powered battery. The powered sun shades would be the next thing to go. Remote controlled shades are a cool party trick at the dealership but simply another item to malfunction in the real world. Thankfully, the sun shades near the rather comfortable bed would freeze in the closed position and we would only have to drape a trash bag over the malfunctioned windows near the sink. We went to sleep the last night unshowered and unshaded but still riding some positive camping vibes that may have been encouraged by some smores and a few items from the wet bar.

Around 3 am I awoke in a bit of a shiver. I fumbled for the HVAC control unit on the wall to turn the heater up and found that it had dipped to a rather-brisk 51 degrees inside the Airstream. A faint clicking near the heating element and a humming from the fridge inside the RV helped me come to a sudden realization, “I bet this stuff runs off propane.” Yes, in my incompetence I had failed to realize that the quarter-filled tank of propane would not be enough for the weekend. We would shiver through the next fours miserable hours with little to no sleep until we finally decided to end our “luxury retreat” and head down the mountain at daybreak. 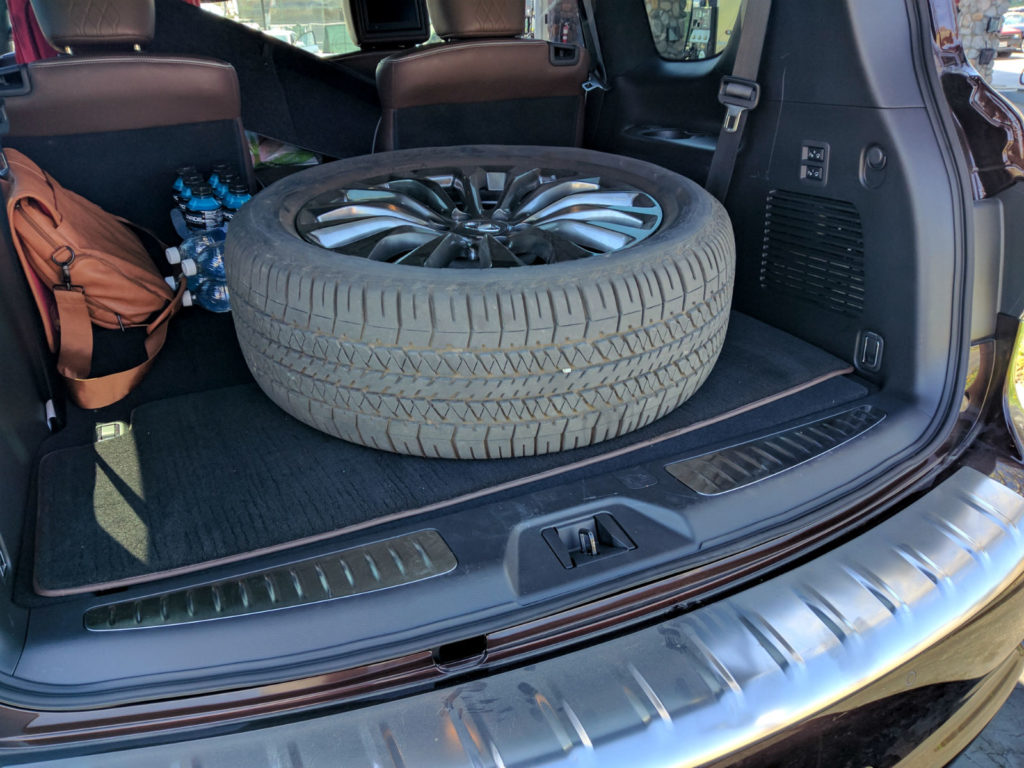 We stopped at a gas station to wipe the sleep from our eyes, grab a coffee, and top off the thirsty Infiniti QX80. The Airstream Interstate fuel gauge sat at half a tank and it could have made the 200-mile journey a couple more times. The sun was now high in the morning sky and the change in elevation had risen temperatures up to 87 degrees as we passed through Rancho Cucamonga. All of a sudden, a piece of metal would slice through the QX80 tire and results in an unplanned stop along the 210 freeway. We would limp both vehicles off the closest exit and into a gas station and shed layers of clothing that we had now sweat through. Haggard and beyond exhausted, we (i.e. AAA) threw the spare tire on and loaded the blown tire and wheel into the rear. Both vehicles would then make it back in one piece and end our relaxing weekend away.

After sleeping for what seemed like an eternity I was able to break down some mental game film of the trip. First, the Mercedes platform makes for a fantastic RV and it was surprisingly engaging and economical to drive. Second, a $180,000 RV takes more than one afternoon to learn all the features and is quite the responsibility to own and maintain. The several issues that we had with the water leak and sun shades are seemingly small problems but do back up owner’s complaints of fit-and-finish problems. Third, the Infiniti QX80 AWD Limited is a ton of SUV for an absolute ton of money. If you aren’t worried about brands or labels then it is certainly worth a consideration.  Finally, we will likely stick to “luxury hotelling” going forward, per my wife’s suggestion.

Valvoline Would Like You To Meet The Pit Pals