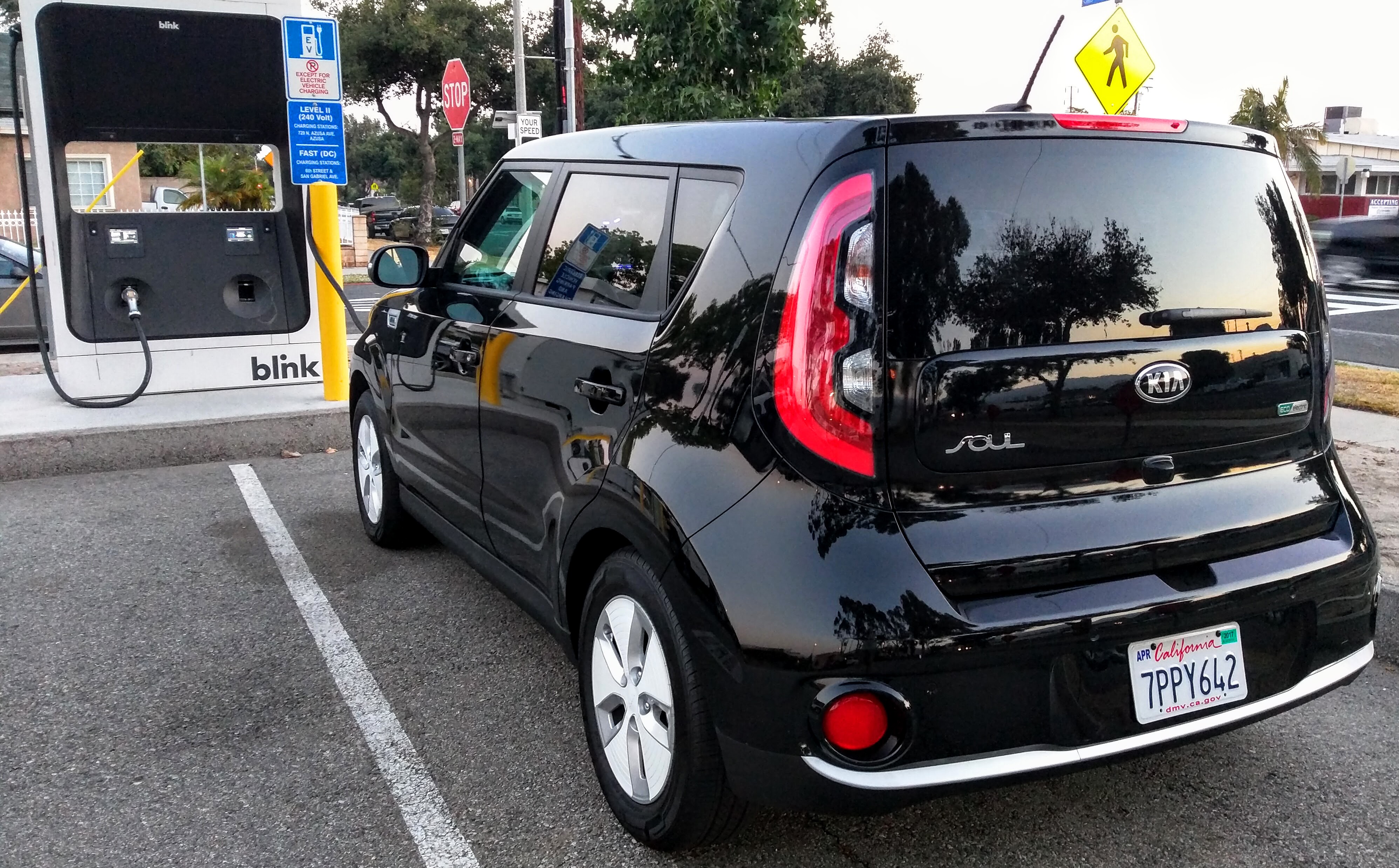 We have had a fair bit of experience driving around under electric power via range-extender electric vehicles like the Cadillac ELR and the new Volvo XC90 T8 and enjoyed them very much. But a rather long commute had given me some hesitation to try out a pure EV vehicle – until now. As range on EV vehicles has expanded to around 90-100 miles I felt it was time to give up gasoline and get a taste of life with the all-electric Soul EV. My round-trip daily drive would total just over 80 miles and dance rather close to the car’s 90 mile range. Despite the risk, I charged up and set off on a rather electric adventure.

The Basics Of Staying Charged

For my week with the 2016 Kia Soul EV I would rely on two major sources of charing. First, the parking stall at our residence has a standard 120 volt wall outlet. The lithium-ion battery in the Soul EV is 27 kWh and would charge at a rate of about 1-2 kWh from the standard charger per hour. This meant that 50% – 100% charge would be around 12 – 14 hours and a full charge from around 20% – 100% could take closer to 18 hours. At night I would generally only have the car parked around 12 hours before using again and had to ensure it stayed around 50% range or above to make sure I had enough for my commute. I will admit that we had one slight technical difficulty the first night. The breaker blew shortly after walking into the house from plugging in the Soul for the night. I awoke to exactly 40 miles of range and elected to take a gasoline vehicle to work. I could have detected that the car was no longer charging via the Kia mobile application but neglected to check before sleeping and there was no notification to say the car stopped charging – somewhat of an important feature that should be added.

Thankfully that was the only charging issue and most of my week would cruise along efficiently thanks to my second form of charing. My office had installed four EV charging spaces several years ago and has become rather crowded with the growing trends of EV vehicles. These ChargePoint powered chargers are 240 volt systems and would need less than 4-5 hours to charge the Soul EV from near-empty to full. Therefore, I could charge just enough to get a comfortable 60-70 mile range at night and slide into the office the next morning with 25-30 miles to spare and top it off while parked at work. The UVO EV services application from Kia shown above allowed you to see when the car would charge, unlock/lock the doors, and even allow you to adjust the climate control while it was plugged in. We used the app to see when the Soul EV was fully charged to quickly move it before the other EV natives in the parking complex grew restless.

In addition to the two main methods of charging I was able to experience what may be the future of charging your electric vehicle on the go. The 2016 Kia Soul EV is not only equipped with a charging port to handle the standard plugs from many 240 volt systems but also adds a second CHAdeMO DC fast-charging port. There are over 80 public DC chargers around Southern California as of our drive and we thankfully had one located just down the street here in Azusa, CA. The DC charger provided by Blink was conveniently located in a shopping center with a Starbucks so we stopped by one afternoon for a nice pick-me-up for both the car and the driver. The Kia site mentions that the 480 volt DC system at 50kW charger will add 80% charge within only 30 minutes. Many of the public DC chargers are rated much lower than 50kW so our results saw closer to 35 minutes to go from 57% to 100%. While using the DC charger we also found a few issues where the system would stop charging sporadically but that is likely more the fault of Blink than anything the Kia had done. Check out the video below from our Facebook to see the easy process of starting the DC charger from the Blink application. 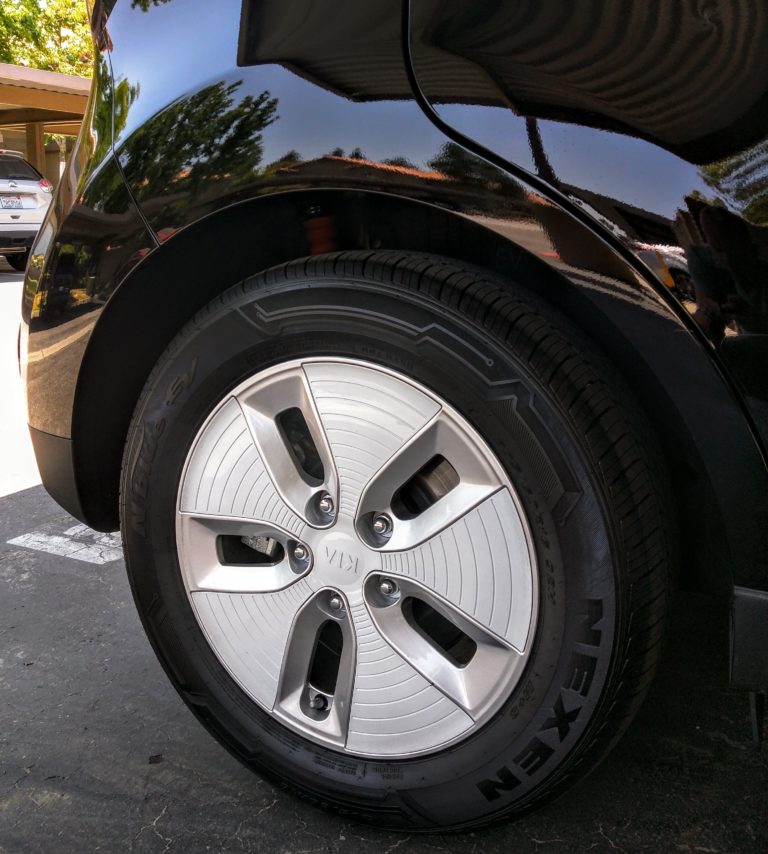 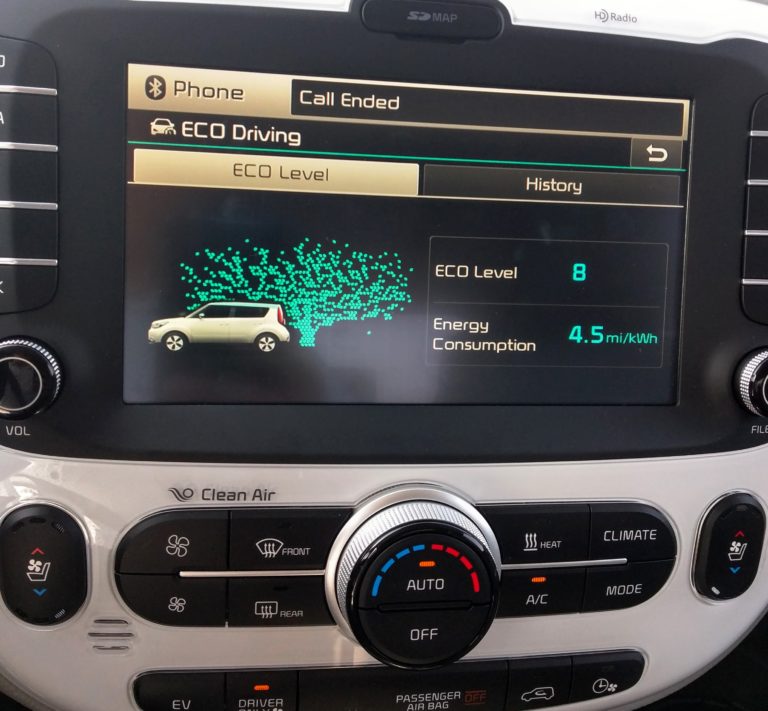 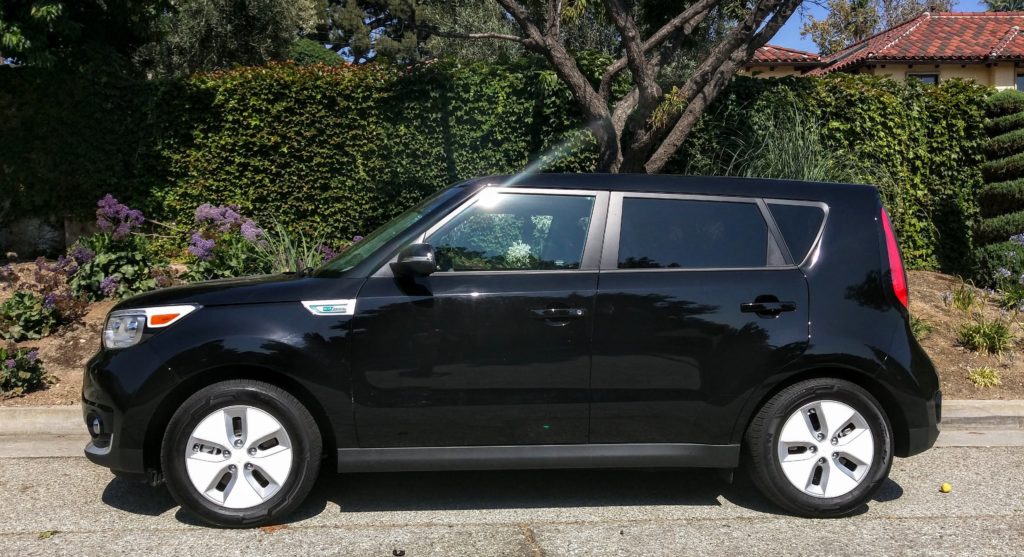 Being an all electric vehicle the Kia Soul EV is as smooth and quiet as anything you will ever drive. Even as a budget contender in this market the Kia felt surprisingly solid as the heavy battery kept the weight planted low down and centered in the car. Handling was rather disconnected but navigating parking lots and stopped freeways could be done with only your pinky finger on the wheel. Low end torque from the electric motor is impressive but passing speeds from 65-75mph can leave you wanting at times.

The interior was very clean – if not a bit sterile – in light grays and white plastics. The speakers on the dash look like tiny UFOs and are funky enough to make anyone’s inner-hamster dance. Continuing with that theme the speaker surrounds will pulse along to your music at night. The digital gauges were absolutely fantastic and reminded me of some of the early digital designs in cars from the 80’s. The typical “Eco” menus are present as you find in any other hybrid or electric vehicle and this time time a growing tree will help illustrate your driving habits. Efficiency is key for those trying to get every mile out of their charge and there is a button to shut of the AC for all but the driver. The transmission can be shifted into “B” mode for extra regenerative braking to gain miles back during your drive. When in this mode and in heavy traffic we were able to get the efficiency up to 4.5 miles per kWh and the range would show closer to 100-110 miles when charged full. So the Soul EV will learn from your driving habits and help give better estimates for your range.

At $38,000 before tax credits the Soul EV is still a technology you are paying quite a premium for. The leather seats and overall quality is great for a budget compact but at the price of a BMW 3-series you really have to be committed to the EV powertrain in order to see the value over gasoline. I always counted out an EV for my personal car due to the high mileage I drive but discovered in my week with the Soul that I could certainly ditch gasoline for a daily commuter. The concept of range anxiety is always present but for those that plan and have the resources to remain charged – you won’t find yourself stranded. The more difficult hurdle for the EV market to tackle is the fact that once the weekend rolled around my gasoline car took us out of town. Many EV drivers will have another car for longer trips but at some point you want a vehicle that can handle 100% of your driving. But for now the Soul EV is certainly liveable as a day to day way for you to stand out from the crowd and adjust early to the growing concept of plugging in and saying goodbye to gasoline.