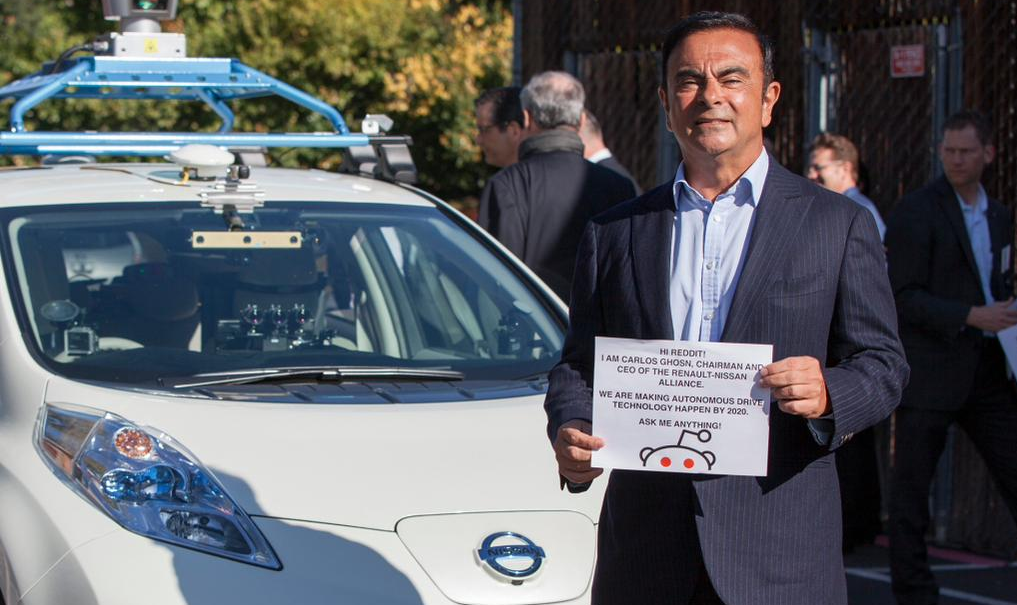 While the automotive press and enthusiasts were clamoring over the new Ford GT yesterday, Carlos Ghosn of Nissan was supposedly settling into a Reddit AmA regarding autonomous vehicles. Ghosn, the CEO of Renault and Nissan, posted that he was ready to discuss the company’s goal of bringing autonomous vehicles to the road by 2020 and the partnership with NASA’s Ames.

Carlos started off by avoided a few heavy hitting questions from users – which can often be expected from someone in his position:

“No disrespect intended to you sir personally, but can you please explain what you are doing about http://nissan.com

As CEO of such a huge corporation I want to know your stance on this issue and whether or not you know anything about the ongoing dispute of this domain name.”

“Hi Carlos,
At the Stanford Executive Program in July 2011 I asked you whether you had any plans to work on self driving cars and you were fairly dismissive of them. You were also stunned when I said that Nevada had just past laws starting to allow them.
What changed your mind?”

It was then discovered that many of the soft ball questions he had actually answered in the AmA thread were from users with little to no comment or posting history on the site. The “users” seemed to be feeding Ghosn pre-written questions that would look to be from actual users. Reddit user HiimCaysE called out and linked to all the profiles that were suspicious and several of the profiles were deleted once exposed. Here are a few of the remaining questions from these fake accounts.

The thread even shot up the frontpage of reddit with several thousand upvotes despite very little comment activity, further leading users to believe that Reddit and the folks at Nissan were up to something. Comments throughout the thread call out both parties and this one in particular summarizes the frustration the best :

“Extremely obvious, considering how all the questions that are positive and name very specific products are the only ones that get answers. Answers that all plug their products…
..This AMA is the most blatant PR stunt I’ve seen. Seriously, read these freaking questions and answers and tell me they don’t seem utterly staged.”
– Comment by chrisman01

It is dissapointing that on a day of big product launches for both the industry and Nissan, the company resorted to working with Reddit to artificially attempt to create a thin facade of positive PR. Nissan has done many great things in the past decade – the new Titan notwithstanding – and it is a shame that their lawyers or marketing folks can’t trust themselves to actual consumers.