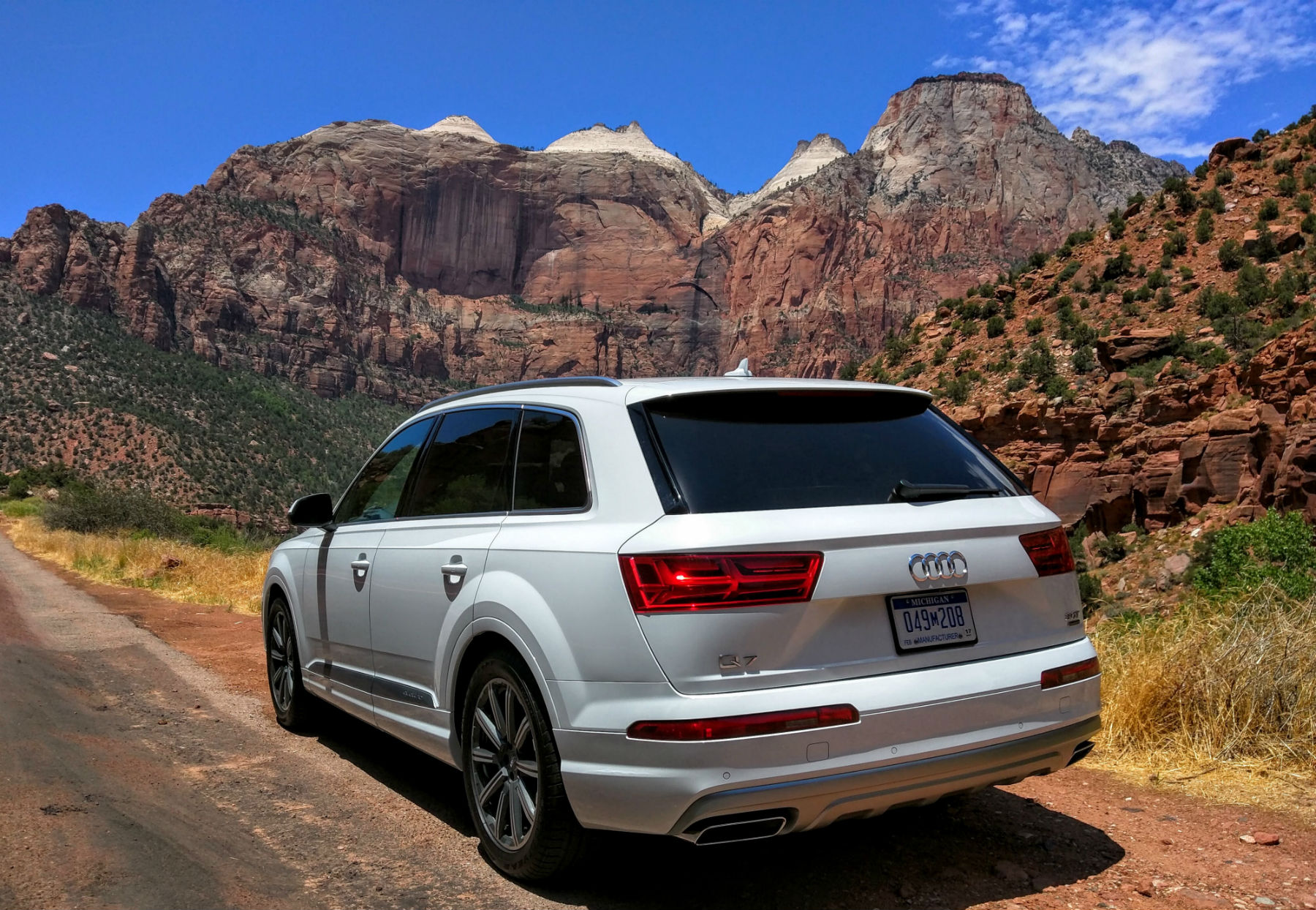 Ah, the Summer road trip. When I was younger it would involve my parents throwing my half-asleep brother and I in the fold-down seats of our van and setting off well before the sun had risen. A brilliant approach by my father as we were led to believe that Las Vegas was only about 45 minutes away from the house for most of my childhood. I would rise from my back seat slumber just in time to see the Strip rise in front of our 1989 Ford Aerostar. One such Summer we had made the trek to Zion National Park at an age where I was old enough to appreciate its beauty, but young enough to forget nearly every other detail about what made it so special.

Thus, I coerced my wife to take the long way around to get to my brother’s place in Logan, UT and soak in the majesty of the Mt. Carmel Highway. The highway was constructed around 1930 and winds through vivid red rock canyons to connect Zion to Highway 89 up to Bryce Canyon National Park. The long departed Aerostar would thankfully be replaced with a more modern 2017 Audi Q7 for this Summer journey. There would be dodgy gas station bathrooms, questionable camping skills, choice words for Utah drivers, and more than I’d like to admit of the “Yacht Rock” XM station. Was this $72,000 German luxury SUV really up to the task of a road trip across the Wild West? 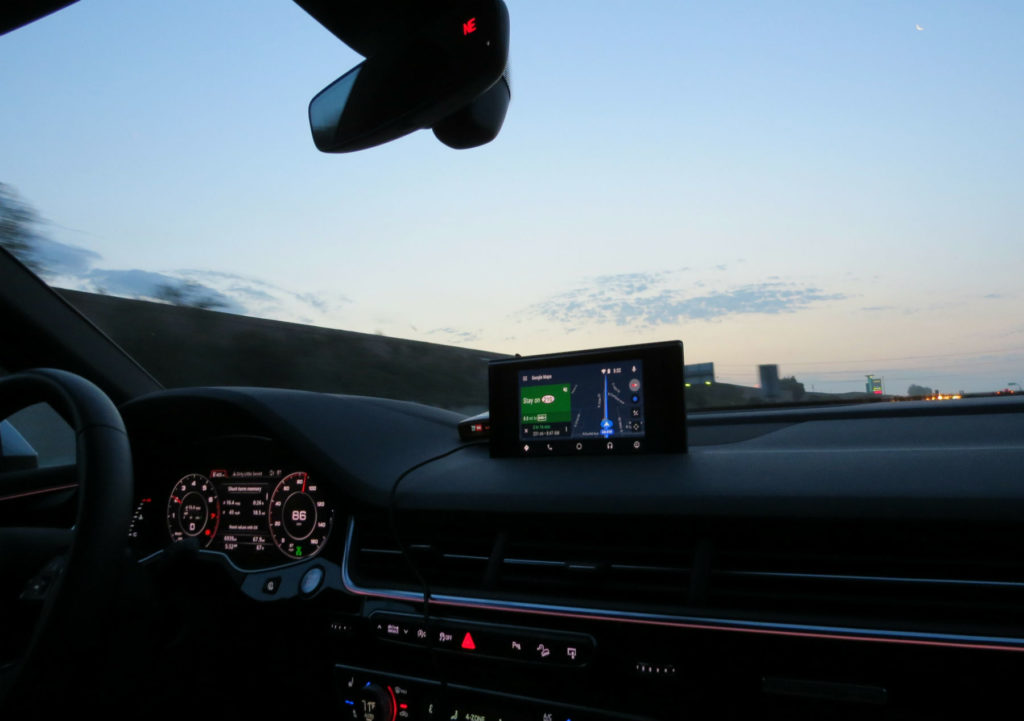 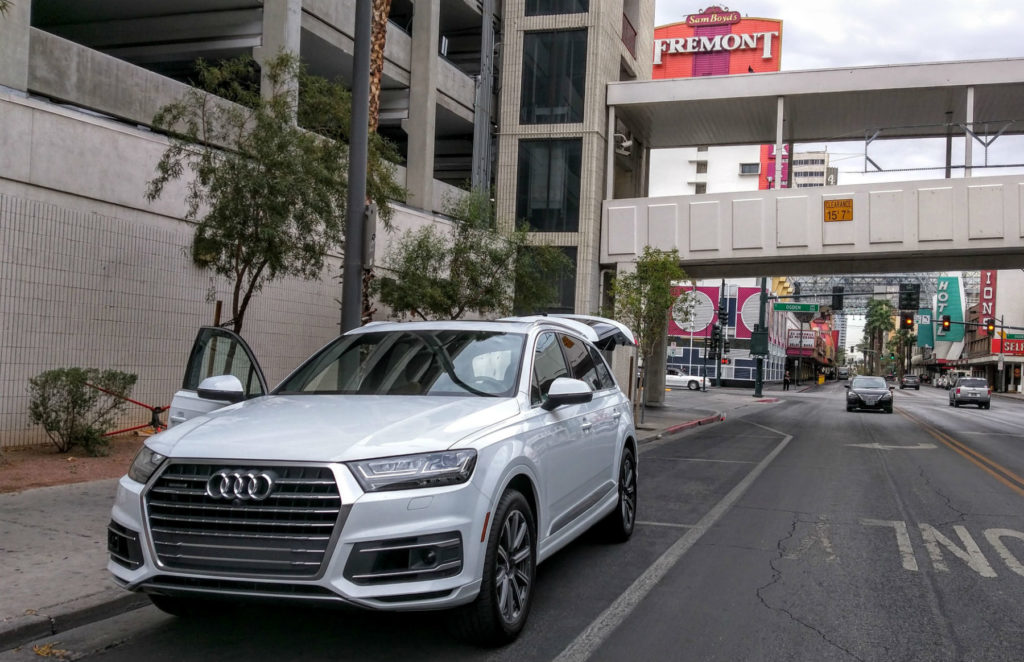 We would be leaving from just east of Los Angeles and the time of departure was initially set at around 5:00AM on the Thursday before July 4th weekend. My brother would be driving 5 hours to Bryce Canyon to check for open camping around 11am and then we’d meet up with him around 1PM or so if he found a good spot. I would of course forget to factor in the 1 hour time difference into our plans with my brother – but let’s not focus on my shortcomings.

We folded the rear pair of seats down and stuffed the entire 37.5 cubic feet of payload in the Audi Q7 full the night before our journey. Important items like the Beltronics GT-7 radar detector (to warn other speeding motorists, of course) and various car chargers and tablets would be stowed and ready. Each modern Audi is equipped with Audi drive select to customize the settings for items like the suspension, throttle, transmission, and steering. I keyed in my typical setting that locked the suspension and steering into “Comfort” while the throttle and transmission get dialed to “Dynamic.” This is a great setting on a long road trip to make sure you are comfortable enough at cruising speeds, but still able to dart into the passing lane and blow by that Buick you’ve been stuck behind since Barstow.

Planning ahead I had searched for the closest Dunkin Donuts to the freeway in Las Vegas the night before on my phone. Using the Android Auto feature in the latest Audi MMI system I was able to stumble into the driver’s seat of the Q7 at 5:00AM and plug in my phone to the USB cable to bring up directions. The system easily set us on the fastest route and showed a destination time of 8:30AM. Thanks to an empty 15 freeway and a fair bit of pull from all 333 horses in the (slightly updated) supercharged 3.0L V6, we were able to roll into Vegas closer to 8:10AM. Thankfully, this just so happened to be the best time to see the assorted mix of broken dreams that is the Dunkin Donuts inside the Fremont Hotel in the morning. With our spirits crushed and our caffeine level high, we pushed forward out of Nevada and towards Zion. 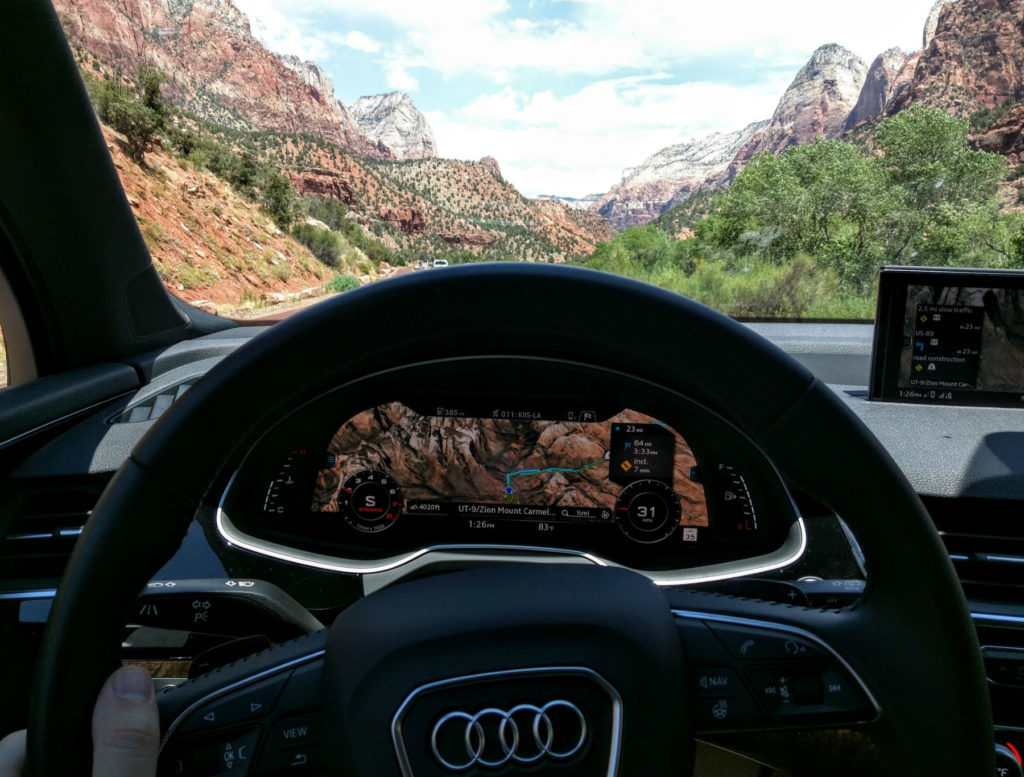 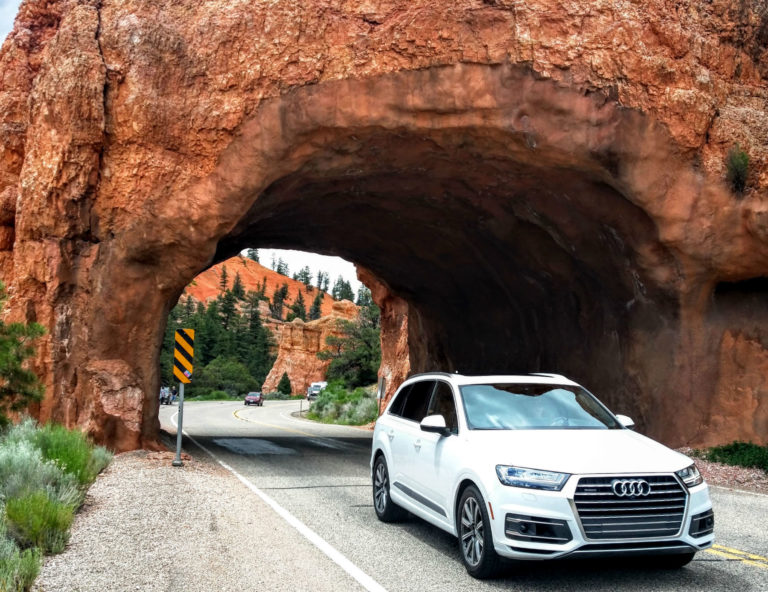 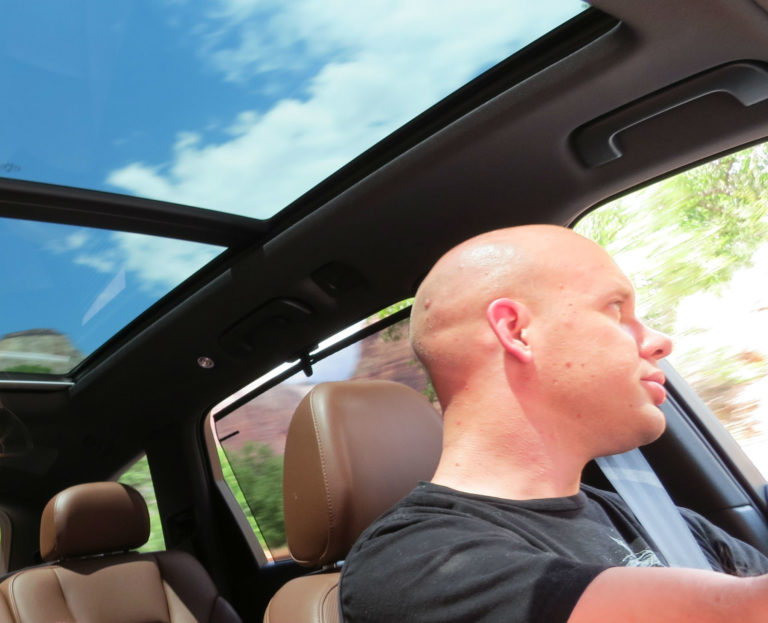 Out of Vegas we set the adaptive cruise control to make sure and follow the pace of the car ahead of us. The system was very quick to react to traffic changes ahead and helped avoid paying complete attention to the minutiae of braking and accelerating. As we arrived in Zion the Audi Q7 was enveloped by breathtaking red mountains and the sound of the Virgin River running along the road. The large SUV showed slight flaws in the air suspension as we body-rolled our way up the twisty mountain roads. The system may give you more control to handle various terrain – but it comes at the cost of some rigidity that you would get in a standard suspension setup. This doesn’t mean that the suspension is completely terrible at handling curves as the AWD system provides loads of grip, but the nearly 5,000lb curb weight becomes very apparent on tight corners.

Heading up the mountain pass we were able to take in all the scenery around us thanks to the massive panoramic sunroof in the new Q7. One touch of a button and the sun shade rolls back to allow you to see every detail of the red arches the car would pass through. Thanks to Audi’s new virtual cockpit we could also track the map and terrain in incredible detail right ahead of the driver. The gauges change to show a full map or show various infotainment details depending on the settings. The only small gripe with the system is that when navigating in Android Auto or Apple Carplay, the system can only show a compass on the virtual cockpit and won’t display any map. 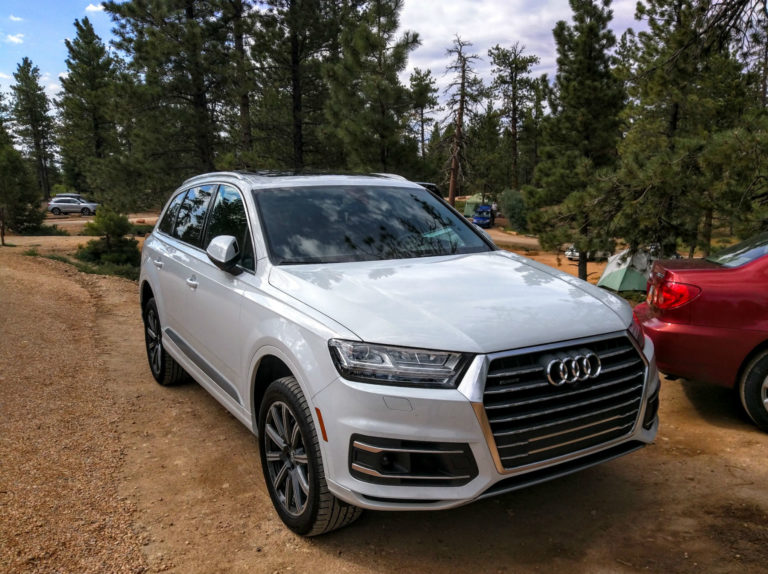 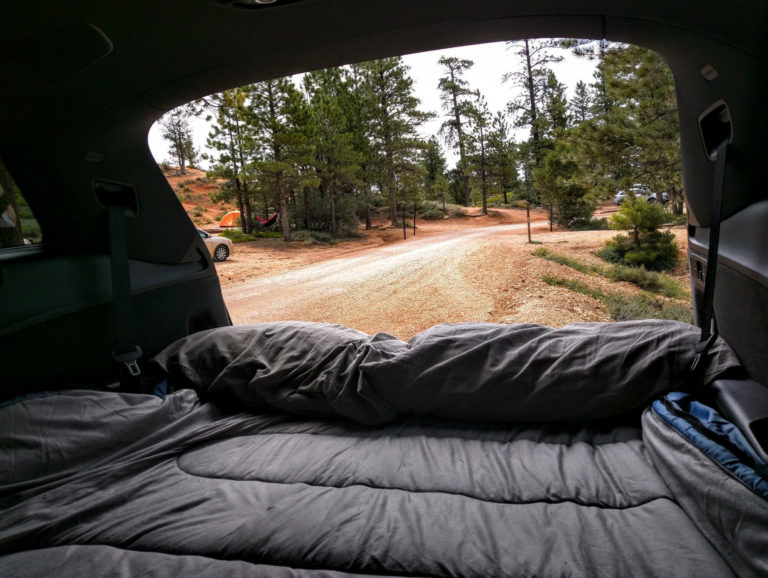 Arriving at Bryce Canyon we lifted the air suspension to the highest Offroad setting. With the suspension lifted to 9.6 inches we could easily take on the dirt road through the campground to settle into our spot along the canyon. In lifted form the Audi Q7 starts to look more like a proper SUV and less like the “large station wagon” that can take shape with it lower to the ground. After a truly embarrassing struggle to start a camp fire with matches we decided to settle in and try to sleep inside the safety and warmth of the Q7 interior. With the rear rows folded down I was able to just fit my 5′ 11″ frame inside the back-end and gaze up at the stars through the rear hatch. Though the picture above of our sleeping arrangement may look comfortable and inviting, my aching back suggests a sleeping pad or air mattress for any future campers.

Reflecting on our trip, Audi seems to have played it safe to upgrade the already great Audi Q7 into a slightly lighter and more modern package than its predecessor. It remains one of the best in class for ride comfort, technology, and quality. But with cars like the handsome new Volvo XC90 hitting the market – is it enough? The Volvo provides a fair bit more style and economy (in T8 trim) into a package that is over 500 pounds lighter. The Audi Q7 continues to be a great vehicle but playing it safe may give up ground to brands that are really trying to innovate in the class.