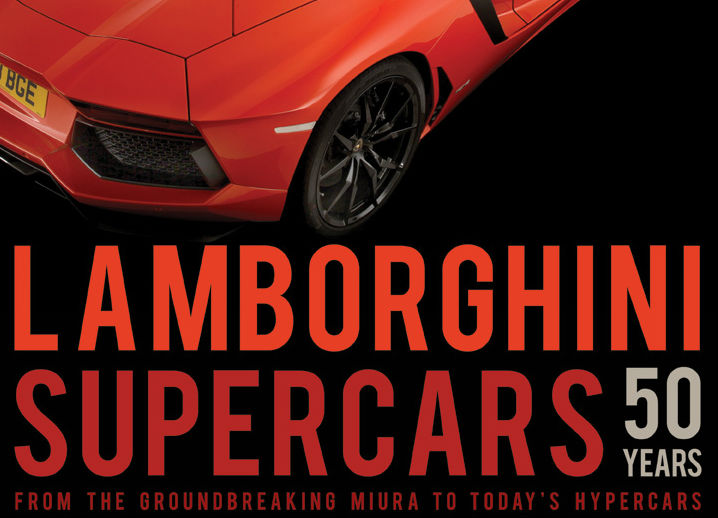 “Ferrari, your cars are rubbish!” I complained. Il Commendatore (Enzo Ferrari) was furious. “Lamborghini, you may be able to drive a tractor but you will never be able to handle a Ferrari properly.” That was the point when I finally decided to make a perfect car.”  – Ferruccio Lamborghini from Thuroughbred & Classic Cars magazine

This was the famous story of how one of Italy’s largest tractor makers decided to challenge an automotive legend and build his own cars. 50 years later the company has become one of the most well known auto manufacturers worldwide. From the bedroom posters of every teen boy to the streets of Rodeo Drive – Lamborghini has created a legacy.

Author Stuart Codling has pieced together the story of 50 years of Lamborghini with the help of beautiful photography from James Mann. Lamborghini Supercars 50 Years : From the Groundbreaking Miura to Today’s Hypercars is a fitting tribute and gives excellent details into the development of the company’s bold concepts and production supercars. This book is a must-have for any automotive enthusiast and is one of the best summations of the iconic brand. Stories and comments from those close to the brand – including Fabio Lamborghini – help paint a picture of what went into the development of these ground-breaking automobiles.

We have put a list together of our three personal favorites from the collection of Lamborghini Supercars and the details that make them so special.

The Miura has our utmost respect as it was the first true mid-engine supercar in the world. The car’s chassis without a body debuted simply named the “P400” at the 1965 Turin Auto Show to show off the advanced engineering of the “steel monocoque “tub” with three longitudinal box-section members, drilled for lightness.” Myth has it that the car was developed behind Ferruccio Lamborghini’s back due to his skepticism for the mid-engine layout and his preference for grand touring cars. It wasn’t until the following year that the body of the Miura rolled out on stage in an iconic orange color to a stampede from the general public. The low-slung sporty Bertone design of the car remains one of the most beautiful works of art – even for modern automotive standards. The book even goes into detail on the argument of which Bertone designer actually created the final design. With a top speed of over 170mph from it’s 370hp V-12 – this was the first automotive bull with real horns.

While the Diablo may not be the best Lamborghini ever made it holds a special place for many children – including myself – who grew up in the 90s. As the quintessential poster supercar of my generation, the Diablo was drawn in every young boy’s notebooks and embodied the desired “supercar” level of ostentatious. Lamborghini had been purchased by Chrysler in the late 1980’s and the Diablo would be the first and only project released under their supervision. The styling was penned by Marcello Gandini but was massaged by the Chrysler team in Detroit to smooth over the edges of the wedge-like styling. The Diablo claimed to reach just over 200-mph and churned out 492-hp and 428ft-lbs of torque from the massive 5.7L V-12 (later increased to 6.0L). It certainly had its flaws as the handling was heavy, steering wheel was cumbersome, and the footwell was “so tight that drivers with feet bigger than a size 10 often had to remove a shoe.” Rising oil prices and customer issues slowed sales to a crawl and Chrysler sold off the company just as the car was hitting showrooms. Still the Diablo represents a unique time in the company’s history and the book details the brief blip that was the Lamborghini Formula 1 development around the same time.

Not only is the Sesto Elemento one of my favorite Lamborghinis of all time but it reaches into the top ten for all automobiles ever made. Sesto Elemento translates to “Sixth Element” which represents carbon – the substance from which the majority of the body and components are built. Lamborghini developed the car as a testament to their advancements in forged composite carbon construction. They worked with companies like Boeing and Calloway Golf to develop the new carbon fiber technology and the Sesto Elemento was the first car to use this type of construction. This allowed parts like the control arms, suspension links and crash structures to be made of carbon fiber. All this leads to a total curb weight of just over 2,000lbs – Less than a Ford Fiesta. With 570 hp from the Gallardo V-10 the car can hit 60mph in just over 2 seconds and is only track legal. Only 20 of these works of art were created and they sold in the $2.5 million dollar range. If this is what the next 50 years of Lamborghini has in store – we cannot wait!

Make sure to grab a copy for yourself of Lamborghini Supercars 50 Years : From the Groundbreaking Miura to Today’s Hypercars

One thought on “Our Favorite Lamborghini Supercars 50 Years Book Review”