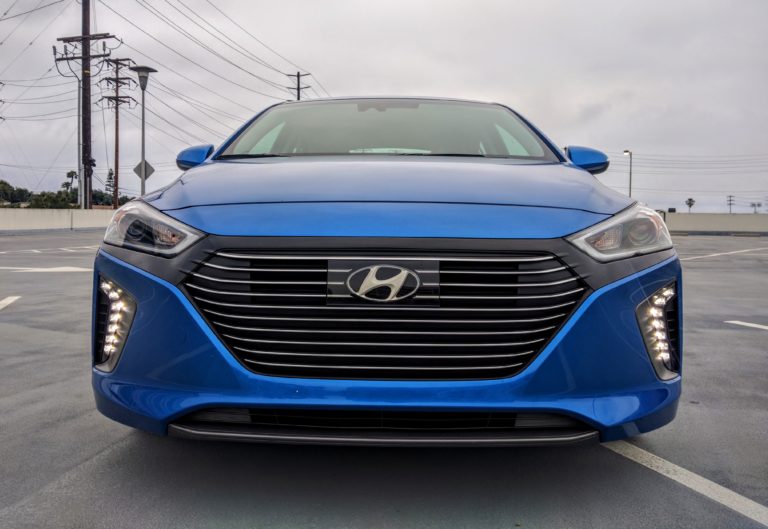 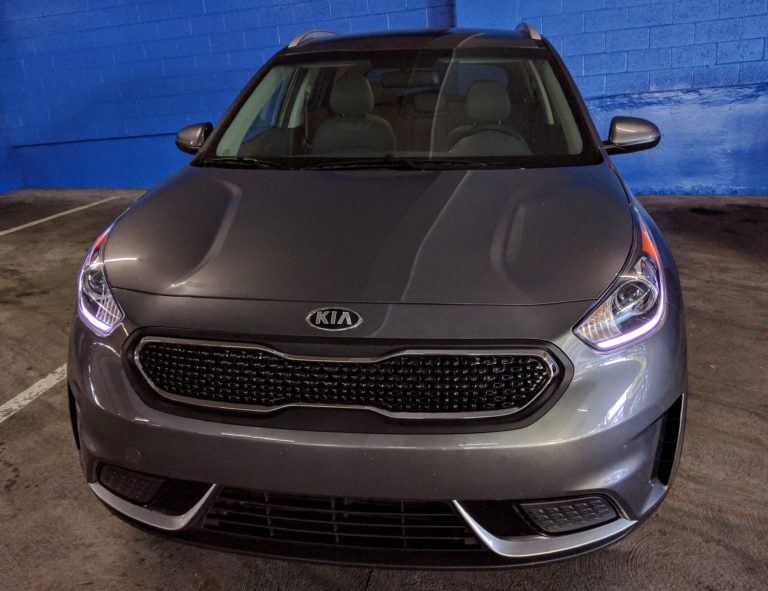 The battle of the hybrid titans is here and this time it happens to be between two brand siblings. Both the Kia Niro and Hyundai Ioniq are equipped with the same hybrid powertrain. Both our 2017 Niro LX and Ioniq Hybrid Limited also sit in the middle-weight class, tipping the scales at around 3,100 pounds. One model, the ultimate Prius fighter with the miles per gallon numbers to back it up on paper. The other, a compact crossover looking to be the fuel efficiency champ in a competitive market. But what happens when you put them both against each other in a battle for the ultimate affordable Korean hybrid? We set out with both of these vehicles to see which might come out on top in a battle to save you money at the pump.

The Hyundai Ioniq comes out swinging with a swift punch of 55 miles per gallon to take a stab at other competitors in the market, including the champion Toyota Prius (which stepped up to 58MPG for the 2017 model year to take back the crown). The new 2017 Ioniq is available in multiple variations including a full EV, a plug-in hybrid, and this traditional hybrid model that we tested. Our model was priced at $31,000 but included upgrades like leather seats, with heated front seats, and smart cruise control. A wireless Qi charging mat for your smartphone was tucked under the media center and was actually large enough to fit my massive Nexus 6 (Something we can’t say for the 2018 Chevy Equinox system). The dash and trim of the car were strewn in a dark gray color, complete with hardened plastics. The Prius certainly has the Hyundai beat with regard to interior quality. But there are some attractive qualities, including the large media center display with Android Auto and the attractive digital gauge cluster that reminded us of glorious digital gauge displays from the 80s. 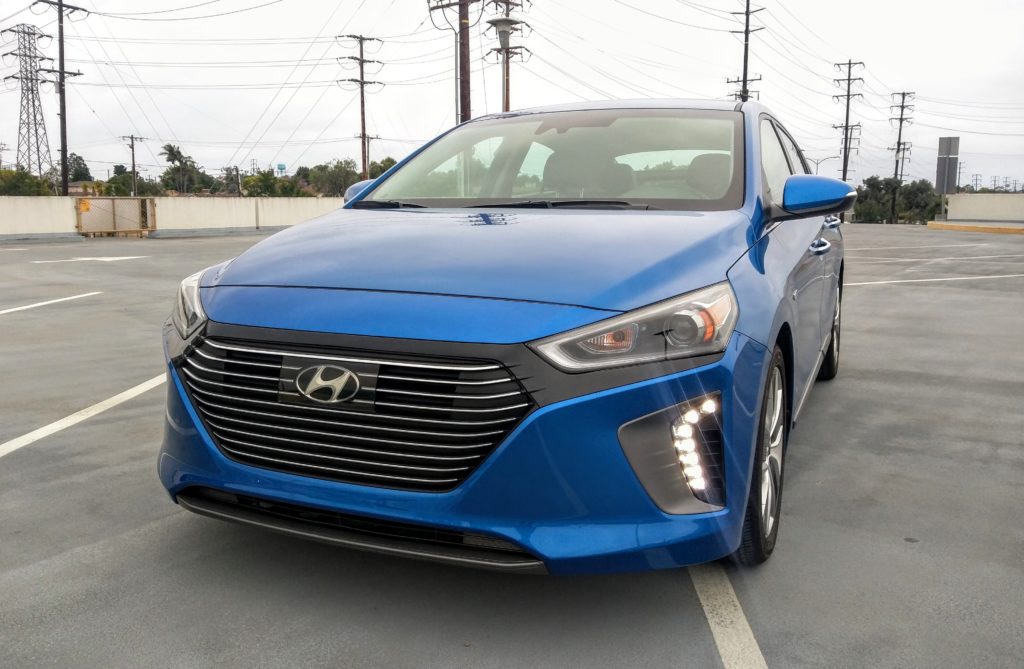 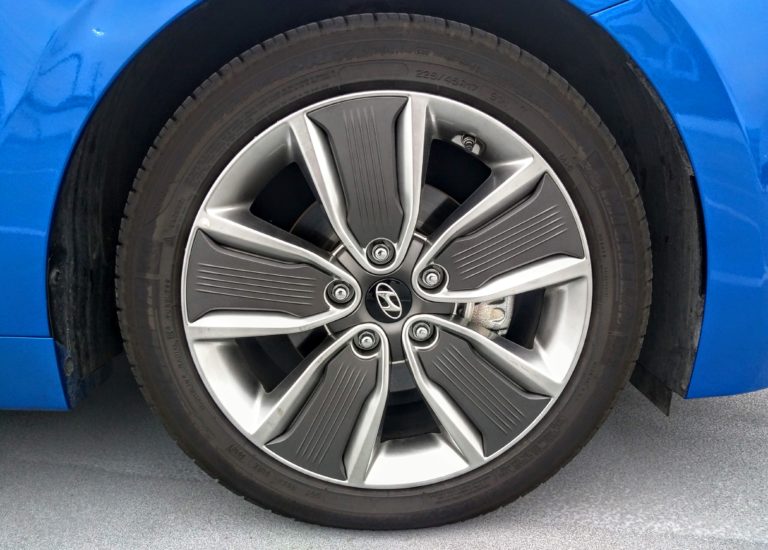 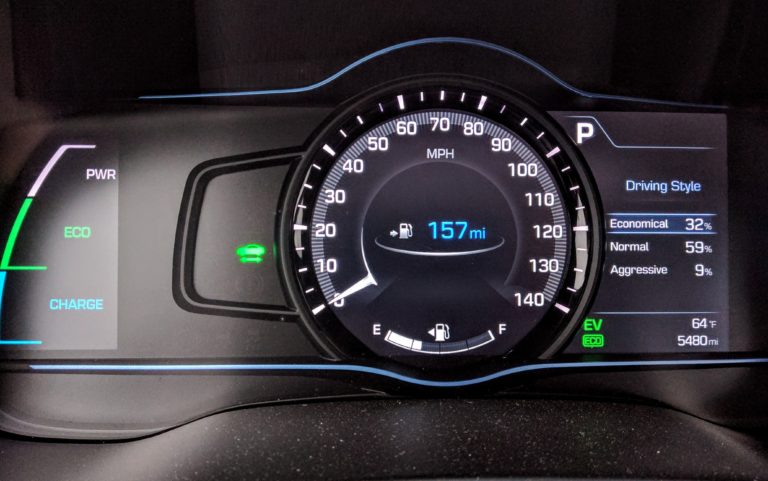 Miles per gallon numbers may look good on paper, but real-world driving situations are often a different story. The acceleration of the 1.6 L 4-cylinder engine paired with the 32 kW electric motor is only adequate when compared to many of the other hybrids on the market. Sport mode certainly helps you stay out front in traffic, but it’s not going to win any races. The Ioniq hybrid seemed to prefer to stay in the gasoline mode far more than the EV mode in normal driving situations. A newer Toyota Prius is a much smoother vehicle for the price and didn’t seem to struggle as much to choose between gas and EV power. While our long-term average showed over 54 miles per gallon on the digital display, the real life calculations showed only 48 miles to the gallon over 745 miles with the Ioniq. This is a heavy blow to the Hyundai, as it delivered nearly identical efficiency to its supposedly less-efficient Kia Niro sibling. While Hyundai seemed to have tuned the hybrid system and transmission for fuel economy, it simply led to more situations where you had to mash on the gas to get out of the way. 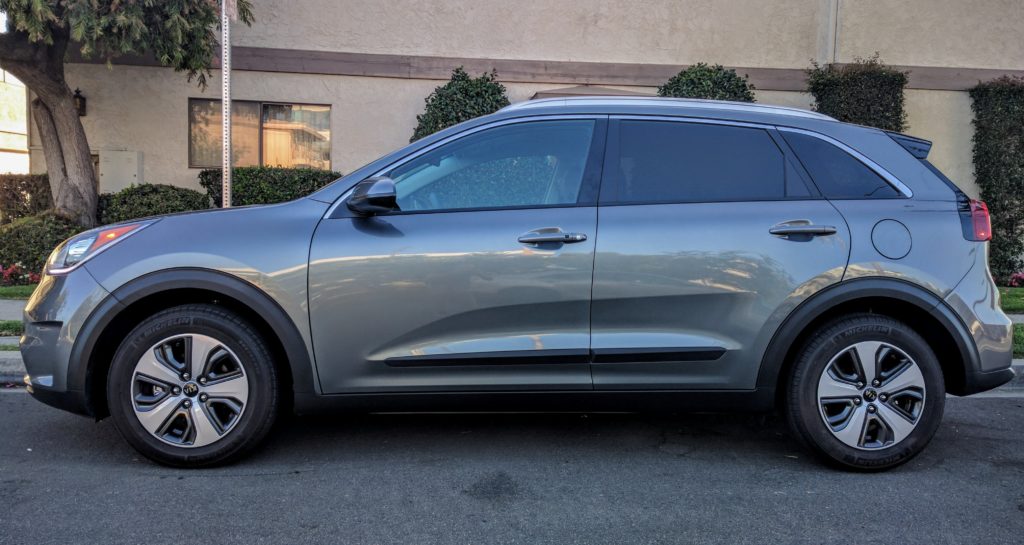 In person, the Kia Niro somehow manages to be more compact, while at the same time wider, then it appears in pictures. While it may be classified as a compact crossover, the Kia Niro will be dwarfed when parked next to vehicles like the Toyota RAV4 or Ford Escape. We imagine the Kia dealers will park the Niro in packs away from the Kia Soul as to not show its true size. When observing the Niro by itself, the body lines and proportions of the exterior help blur the lines between small crossover and what some may call a hatchback. From the front view of the car, you may believe it to be wider than it is long. Which isn’t completely far off as this “compact” SUV is only 5-inches narrower than the 8-passenger Kia Sedona van. On the inside, the width of the Nero becomes apparent as you can sit three adults rather comfortably in the rear seat. The rear storage space is also fantastic for the size of the overall car and could swallow the microscopic Mazda CX-3 interior several times over. The interior features the same gray hard plastics as the Hyundai Ioniq, but they are much easier to forgive at  a price that is $7,000 less than our Ioniq Hybrid Limited. The digital gauge remains to be one of the sleekest in the industry, with many similarities to the system in the Hyundai Ioniq. 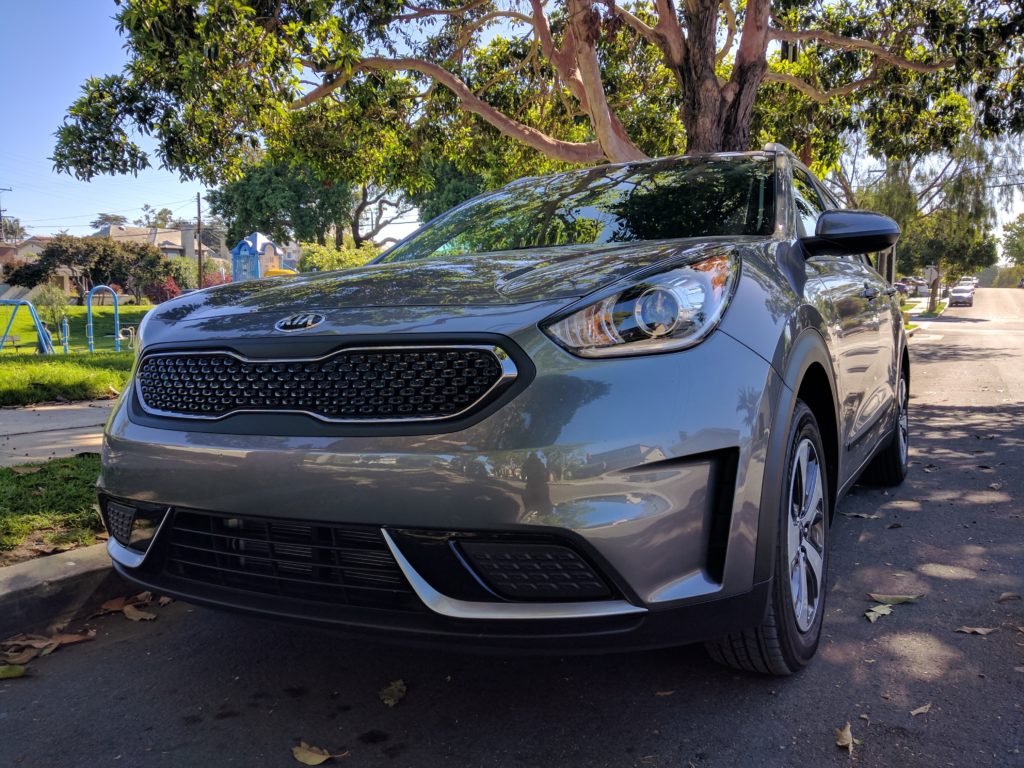 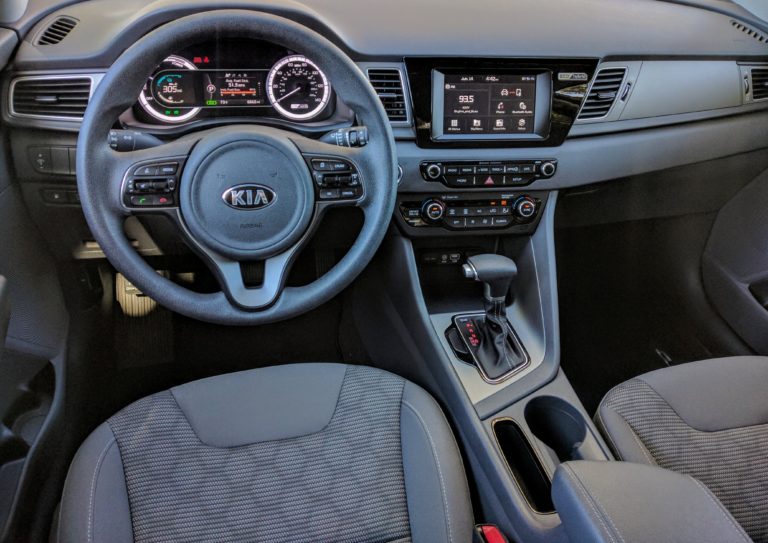 One the road, the Kia Niro drives nearly identical to the Ioniq with a slightly higher seating position to give the impression that it is a true crossover. The Niro feels solid and beyond what you would expect from a “budget hybrid” priced at only $24,095. Sport mode will still get the job done if you need to pull out ahead of traffic or climb any grade. Similar to our time with the Ioniq, we spent most of our 912 miles in traffic and the Niro showed around 52 miles per gallon at the first fill up at 495 miles (measured at fuel pump instead of by digital readout). With more time spent at highway speeds for the second tank, that number eventually dropped to an average of 47 miles per gallon. Therefore, the Kia Niro seemed to achieve near identical numbers to the Ioniq in rather similar driving situations. Your mileage, quite literally, may vary based on everything from weather to your right foot. In our experience, the Niro seemed to be tuned more aggressively to get the heavier vehicle up to speed off the line and was easier to stay off of the throttle in stop-n-go traffic.

The biggest blow that the Niro gives to the Hyundai Ioniq is that you simply don’t expect 40-50MPG from a vehicle of this shape. I get that the Niro is an SUV only in perception, but the entire “crossover” model was built around that perception. Even if a vehicle rides on a car platform, it simply needs to have a higher roofline and have a blocky front end that screams “I am a larger and safer truck” in order to sell to US buyers. On the other side, the Hyundai Ioniq tells every passerby that a Hyundai Elantra was shaped in a wind-tunnel to become a streamlined economy machine. Ultimately, the Hyundai Ioniq Hybrid was created to spread the platform cost across the plug-in hybrid and EV versions. But our impressions and early sales numbers show that the 2017 Kia Niro is the Korean hybrid king. However, the Hyundai Motor Group parent company is the ultimate winner as both vehicles should cause Toyota to stand up and take notice.