Many automakers seem to be caught up in a crossover craze and continue to be focused on larger vehicles as the price of gasoline gets smaller. Meanwhile, Kia and Hyundai are moving to the forefront of more efficient hybrid, plug-in hybrid, and all-electric vehicle powertrains. We recently tested the Kia Niro and Hyundai Ioniq hybrid siblings to find that both offer a fantastic alternative to the legendary, but mundane, Toyota Prius. In the continued quest to get the general public familiar with life beyond gasoline, many of the existing Kia products are also making the move to electric.

While the original Kia Optima was a rather fringe vehicle, the introduction of the 2011 Optima redesign more than tripled the sales and made the car a serious contender in the mid-sized sedan market. That success shows as the latest fourth-generation design looks rather menacing and noticeably more confident. This new Optima seems ready to keep the pressure on as others lose focus on the segment in favor of profitable SUVs. We connected with a 2017 Kia Optima PHEV (Plug-in Hybrid Electric Vehicle) on a recent trip from Los Angles to Phoenix, Arizona. The Optima would be put to the test as we set a course through record-breaking temperatures in the grueling desert. Would the comfort and convenience of this efficient commuter hold up as we unplugged and ventured out on the open road?

The 2017 Kia Optima Plug-In Hybrid Electric utilizes a variation of the same 2.0L 4-cylinder motor that you find in the normal Hybrid Optima. However, the PHEV model includes a more powerful 66hp electric motor to give the car a total of 202hp with both systems combined. Both Hybrid Optimas use a 6-speed DCT transmission that makes the platform feel noticeably different than many other EV vehicles on the road. This is because the electric power actually goes through that dual-clutch transmission and you will actually feel the shifts up and down.

Before we set off on our journey, the Kia Optima was plugged into a regular outlet and would top off in about 9 hours. With the 9.8-kWh battery at 100%, you will typically be able to drive on pure electric power around 29 miles. However, in the heavy Los Angeles traffic that would drive us to want to escape to another state, we would see closer to 40 miles. In the past, charging up a PHEV before a long journey may have only let you ride on electric just beyond the city limits. But the Optima was equipped with different drive modes that let you wait for the most efficient time to choose to drive on electric power. During this trip, we would toggle between the “hybrid,” “electric,” and “charge” modes to learn how each changed the nature of the car and the fuel economy. We unplugged the Optima, coasted quietly in “electric” mode to the freeway, then shifted the car into “hybrid” mode and dashed off towards the rising sun. 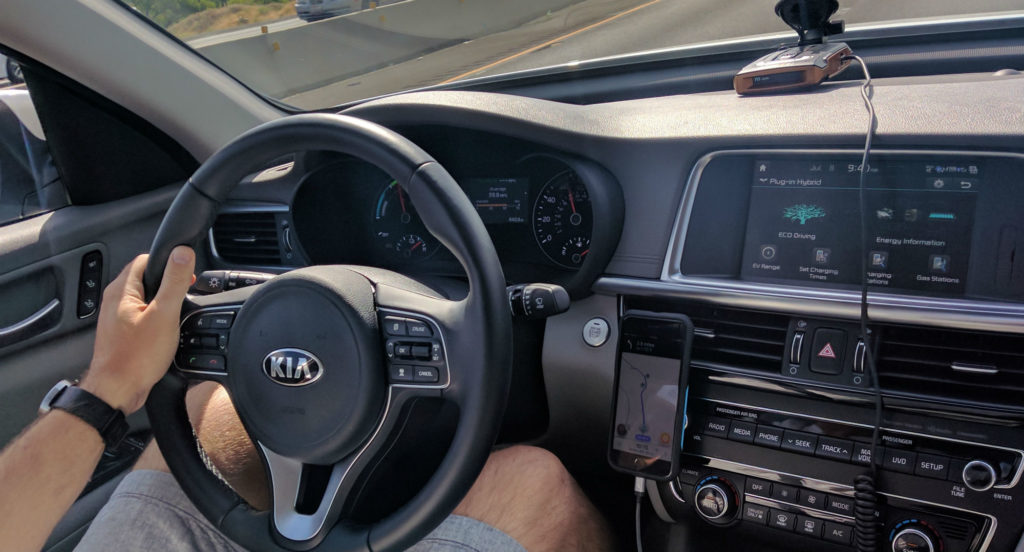 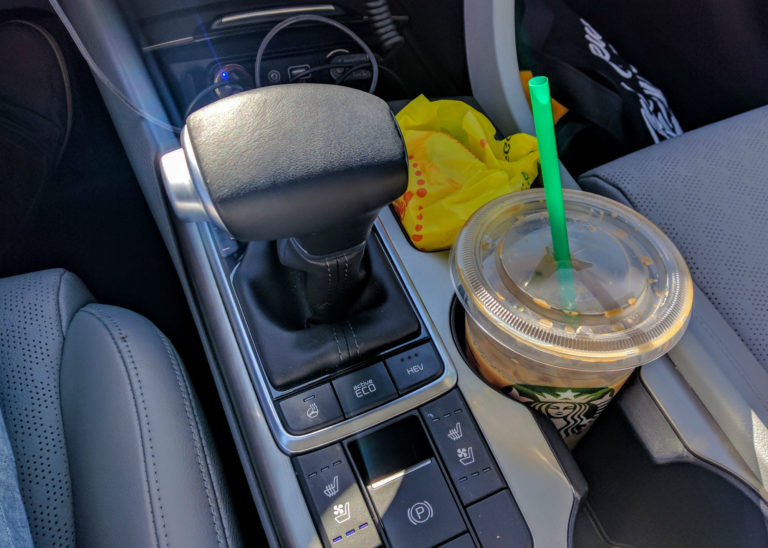 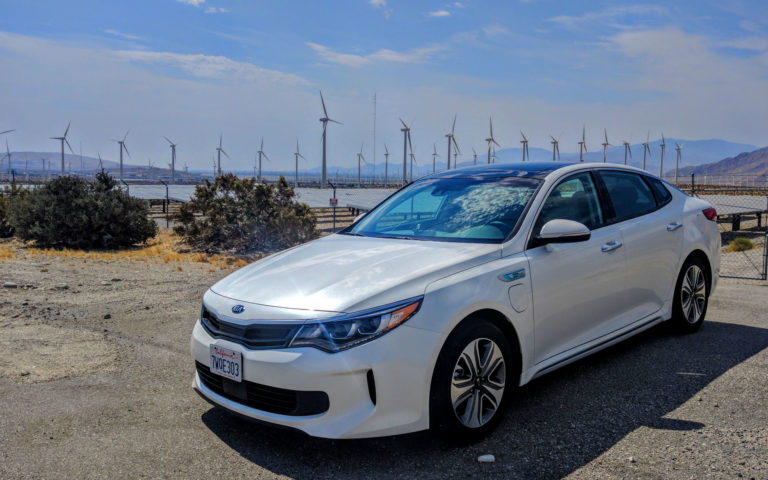 The interior of the Kia Optima PHEV is a sea of gray plastic and leather but the materials are quality and it makes for a pleasant space on a long drive. We even discovered that the square-shaped storage in front of the cupholder doubles as a fantastic McMuffin holder. The front passengers had access to both heated and cooled seats to help keep the interior cool as temperatures in the first hour of our drive reached over 110 degrees. While on the highway and in hybrid mode the car would utilize the gasoline engine combined with the electric to keep the car up to speed. As we were about 30 minutes from a planned stop at the San Gorgonio Pass Wind Farm, we switched the Optima into “charge” mode to top off the depleted battery we had used at highway speeds. This allowed us to switch to “electric” mode as we exited the freeway and coast in absolute silence towards the mechanical forest ahead, made up of over 4,000 windmills.

Southern California residents may take the San Gorgonio wind pass for granted as they fly by on the 10 freeway headed to Palm Springs, but up close the enormous scale of the operation sets in. This particular wind farm produces just under 900 gigawatt-hours (GWh) of electricity per year. That power would be enough to top off the 9.8 kWh battery in our 2017 Kia Optima PHEV from empty over 100 million times and it provides enough power for Palm Springs and the entire Coachella Valley. Though it may be a bit outdated, a visit to the San Gorgonio Wind Farm from our late friend Huell Howser is possibly the best way to help appreciate some of the methodologies used to collect energy from the wind. We snap a photo of the Optima with a backdrop of the “farm” and can’t help but think about the symbiotic relationship between the two technologies for a moment. In a very broad sense, a strong gust of wind could transport a majority of the US to work and back each day.

We climb out of the intense heat and continue our journey towards Arizona. On the highway, we work with the Kia to balance the electric and gas power. The result is a reasonable 36-39 MPG at highway speeds as we cross the border into the Grand Canyon State. Fuel economy had peaked during our 80-mile round-trip commute the week before with closer to 50 MPG average in heavy traffic. The Kia Optima surprised us in each of the modes as both the electric, gas, and hybrid power delivery were adequate to stay out ahead of the highway traffic.  Which, is quite an achievement considering the flow of traffic was often well above 75 MPH during our trip. The Kia’s advanced cruise control system also helped our economy by maintaining speeds and even decelerating based on the actions of the car we were following. We really appreciated the “charge” function and would use the gas motor while traveling at faster speeds to keep the battery filled up and ready for our next stop. Arriving in Pheonix, the Optima was able to utilize that battery power to navigate around town when electric driving was most efficient. 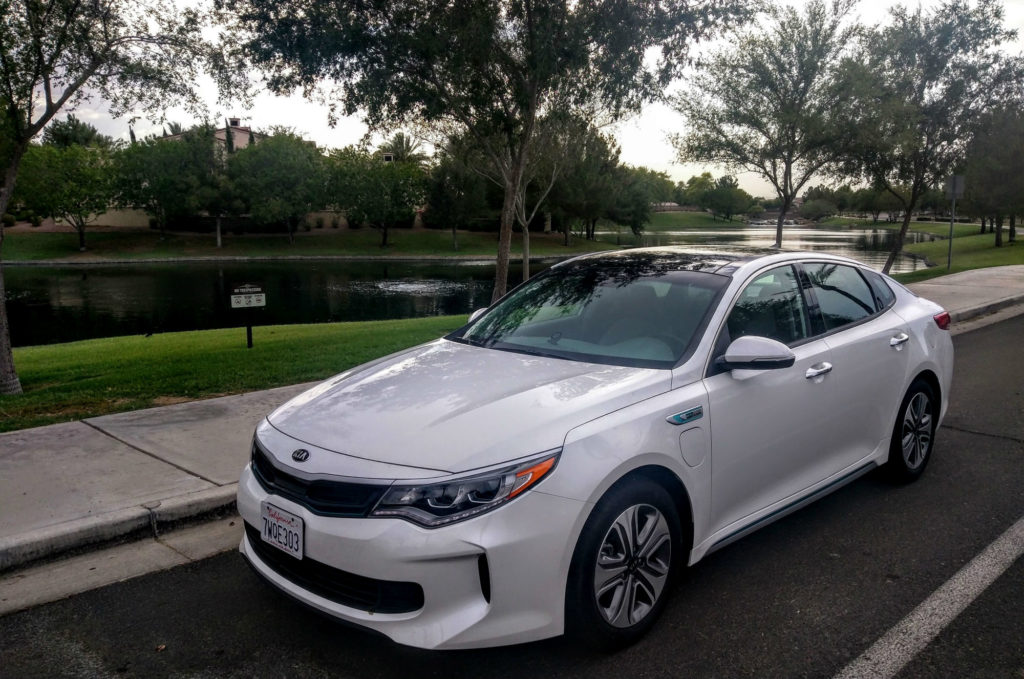 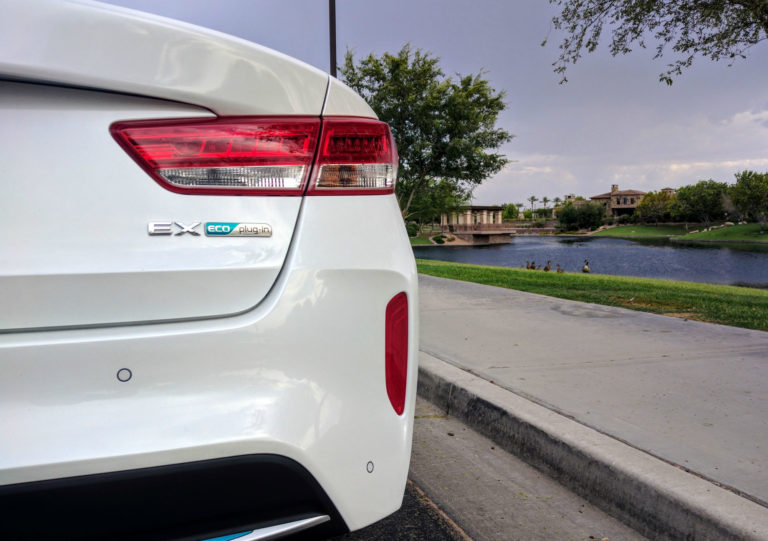 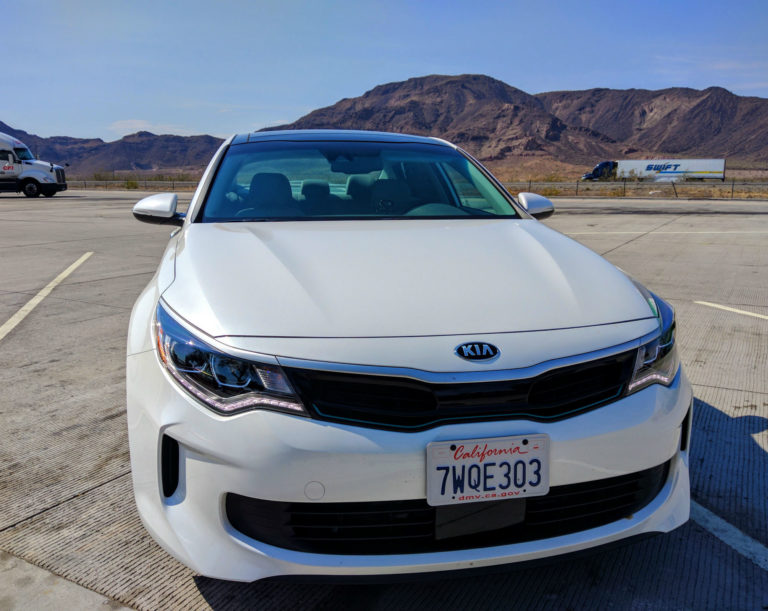 The Kia Optima PHEV offers a great gateway drug for owners who may not be confident enough to rely completely on electric power. If you have a short commute to work then you would rarely use gasoline and the car would still act as an efficient hybrid vehicle on longer trips out of town. It had no issues keeping us comfortable and cool on a blistering 6-hour road trip and simply doesn’t look or feel like the average plug-in electric vehicle. While the Kia Optima PHEV starts at $35k, our model was equipped with the EX Technology Package, with features like autonomous emergency braking and advanced smart cruise control,  for an additional $5,250 and totaled to $41,800. That is an almost $10k premium over a gasoline-only Optima but current California rebates for the PHEV would earn a buyer around $6,500. Your driving habits, state incentives, and potential savings will ultimately decide if the PHEV is the right car for you, but we believe it is a safe way to get familiar with the future of automotive technology. 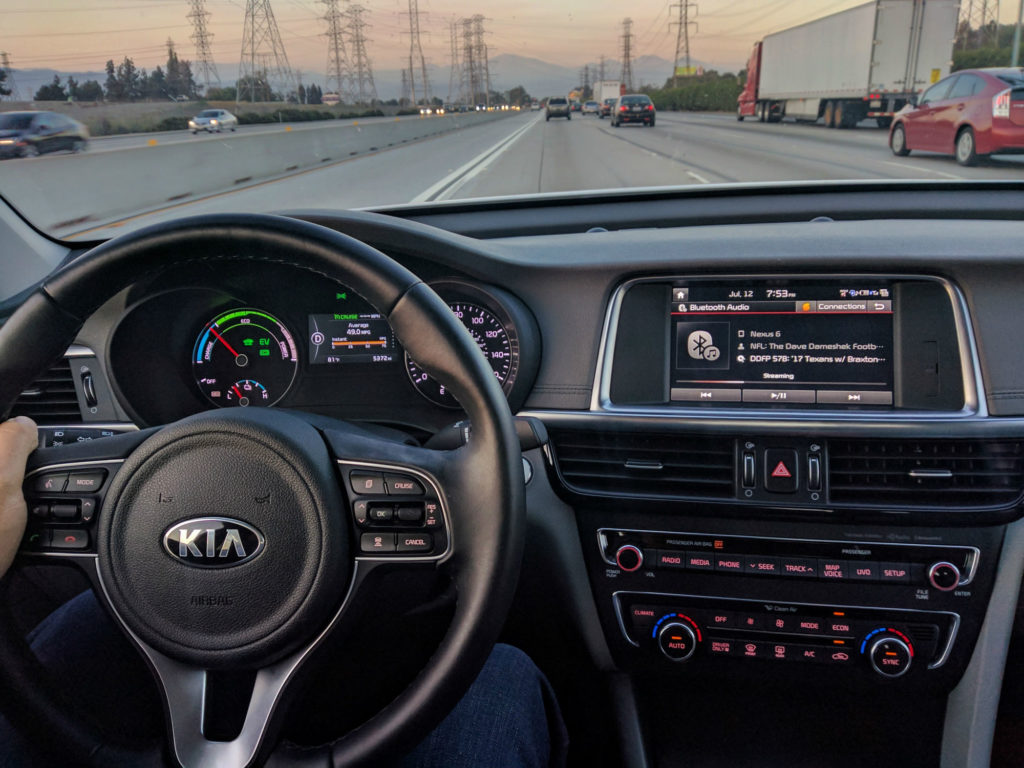 2017 Kia Cadenza Premium Review : When You Simply Need a Car