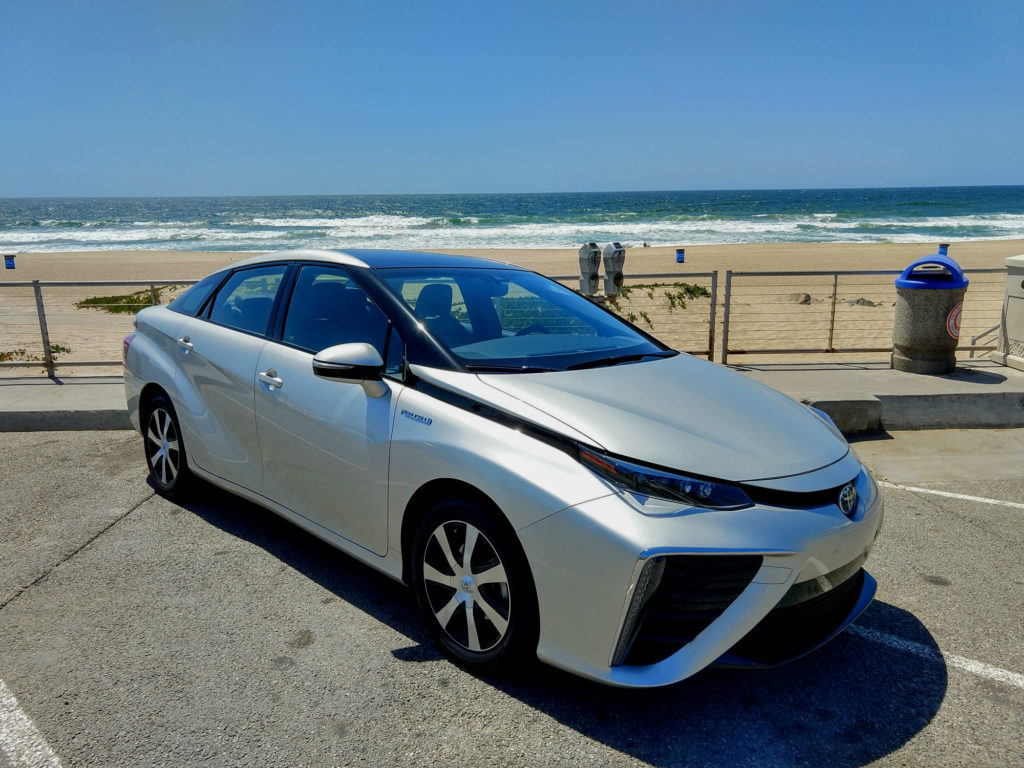 We have reviewed a wide range of all-electric vehicles including the Kia Soul EV, Tesla Roadster, and even the lowly Mitsubishi i-MiEV. There are many benefits for those who want to switch to electric power, but longer charging times and range anxiety may have some folks looking elsewhere for a replacement to gasoline. Enter the hydrogen fuel cell. The fuel cell in the new Toyota Mirai produces energy from the reaction between stored hydrogen and the oxygen in the air, the result of this reaction is clean and pure water. Sure, the entire process is slightly more complicated than that, as explained by Toyota in this video.

The benefit—at least on paper—is a car that is just as quick to fill as gasoline, has a range over 300 miles, and produces thirst-quenching and planet-sustaining water. But there is always a catch. We put over 700 miles on a Mirai in a week to show what it is really like to drive every day, including the cost to refuel and the average efficiency of the powertrain. Check out the FB live video below to see what it is like to fill up the Mirai with hydrogen and hear a few of the major caveats to consider before looking at this Toyota.

To address many of the concerns, here is a list of benefits that Toyota includes with the purchase or lease of a new Mirai:

ToyotaCare’s no cost enhanced roadside assistance for three years, regardless of mileage.

In addition to those benefits, California buyers also get an $8,000 federal tax credit, a $5,000 California state rebate and something called “Trailblazer purchase support” from Toyota worth $7,500. This helps lower the nearly $58,000 sticker to a slightly more reasonable $37,500. This strategy is similar to the incentives found for EV vehicles and helps remove some of the additional costs associated with early ownership. These discounts also translate in a lease for around $349/month for 36 months at 12,000 miles per year.

We lived without the free fueling incentive for our week of driving and would pay around $60 for each fill-up of hydrogen. This alone makes saving the planet a harder sell as even the most expensive public EV charging is much cheaper for a similar 260-mile journey. However, the 5-minute fill-up time is hard to beat and is certainly the biggest advantage that hydrogen has on an all-electric car. Just as it has taken years to expand the EV charging infrastructure, the number of hydrogen fueling stations around the LA area are sparse.

As of writing this article, there are only 20 stations total for the LA, Orange, Riverside, and San Bernadino county areas. We were lucky enough to live down the street from the South Coast Air Quality Management District offices where you’ll find over 30 EV chargers, two hydrogen fueling pumps, and an NGV fueling station. While fueling, we talked with a Mirai owner of over two years who loved his car and ownership experience. He wasn’t worried about his free fuel benefit ending and mentioned that he purchased the vehicle specifically for the benefits to the environment and not the cost savings over the Mercedes E-Class he had prior. 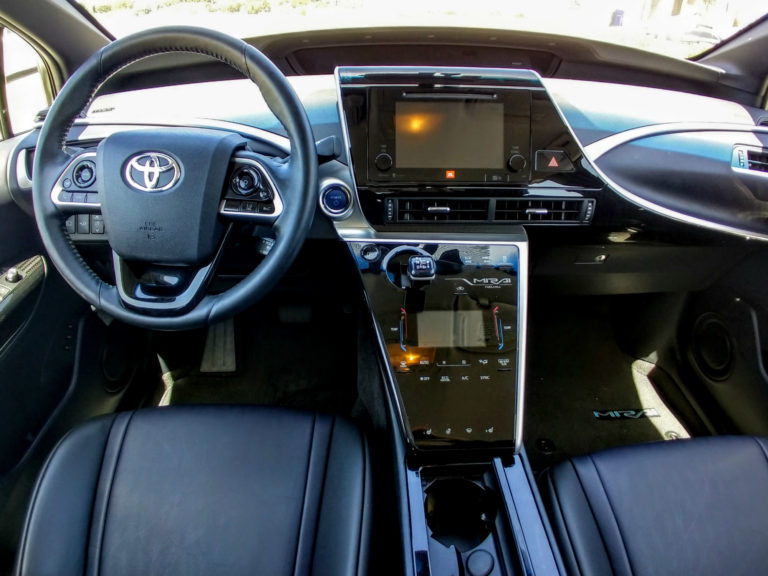 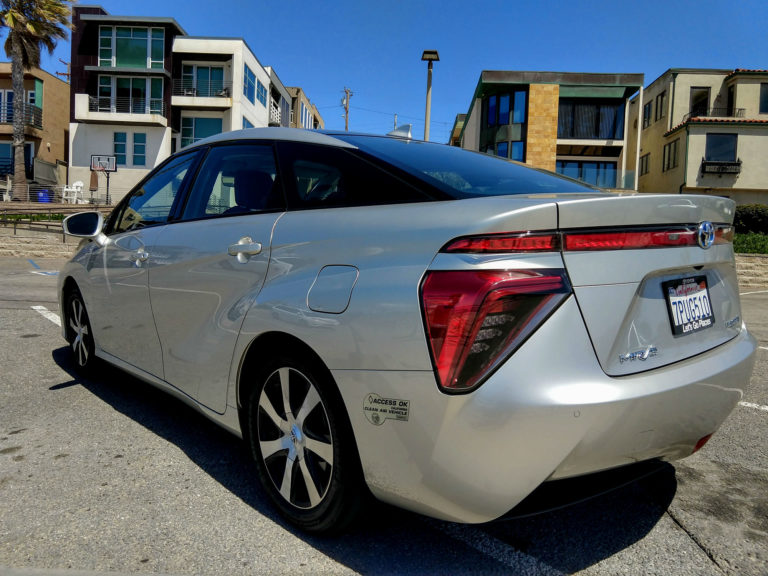 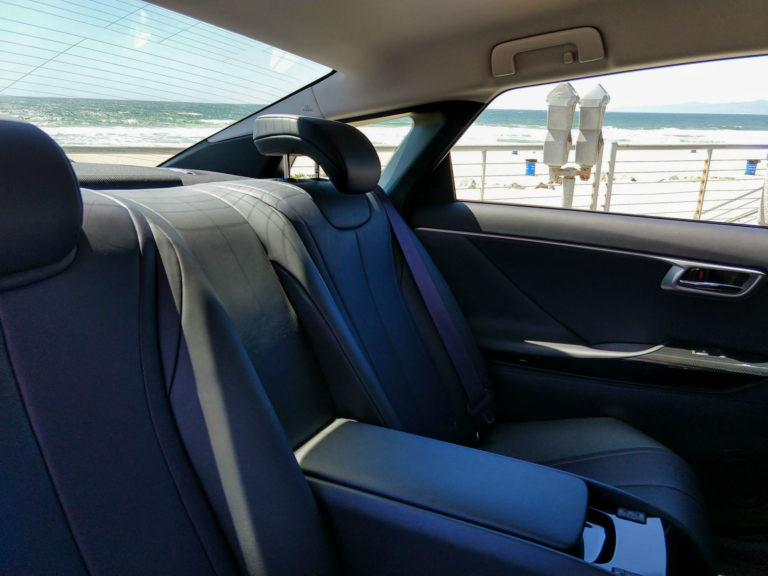 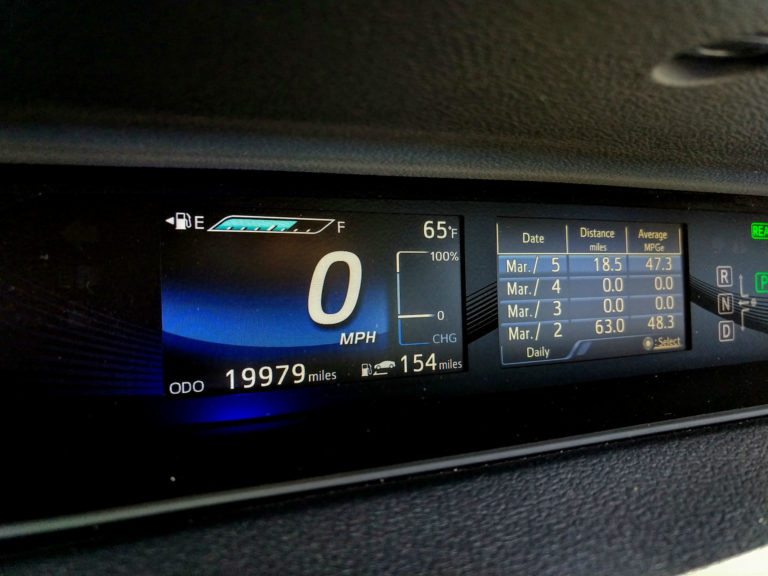 On the road, the Toyota Mirai drives as smooth as any Prius we’ve driven, with only a hint of a futuristic hum from the motor. This is a drastic difference in technology over a Honda FCX Clarity fuel cell vehicle that we drove years ago, which made a terrible noise. At over 4,000 pounds, the Mirai’s hydrogen power is much less efficient than many of its EV and even some hybrid counterparts. The Mirai is rated at 67 MPGe, but we generally saw numbers just below 50 MPGe. That MPGe rating is calculated by figuring out the number of miles a vehicle can go using the same energy content as a gallon of gas. The EPA calculates that 33.7 kilowatt-hours of electricity is the equivalent to one gallon of gas and most modern EVs see well north of 100 MPGe. We averaged just under the 300-miles for each fill-up in heavy-traffic driving conditions. The two carbon fiber-reinforced tanks in the Mirai hold just over 32 gallons of hydrogen and efficiency will continue to increase with the development of the technology.

In the interior, the Mirai has comfortable seating for four adults, with a center console taking up space where you’d normally find a middle seat in the back. The materials and digital gauges on the Mirai look very futuristic and range from a blue “alien skin” leather for the seats to a carbon fiber door trim. The transmission shifter features the same engine braking “B” option that allows you to restore some charge when stopping or decelerating down a grade.

Overall, the Toyota Mirai is the first major step to public acceptance of the hydrogen fuel cell vehicle. Other cars like the Honda Clarity were lease-only options that required high payments and weren’t available to keep after the lease period. The Mirai faces some of the same early challenges that EVs went through in terms of growing the fueling infrastructure and informing the general public about the benefits. However, the biggest hurdle for the Mirai and FCV vehicles is the high cost to generate the hydrogen and distribute it to the owners. We don’t see the average consumer lining up to pay over $60 every 300 miles when a comparable hybrid or EV can operate at a fraction of the cost.

In closing, we did want to demonstrate the biggest argument for the “clean” and “nature-friendly” technology that propels the Toyota Mirai. Please also note, Toyota discourages drinking water from the Mirai as the oxygen in certain areas could have contaminants that could cause illness. We have dealt with crappy air quality in LA for years and decided to take the risk. Check out our video below and let us know your thoughts on the Mirai or hydrogen fuel cell technology.